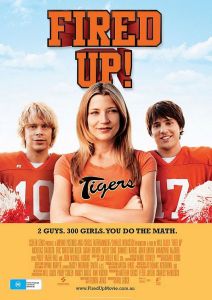 Written by four different writers under the combined porn-like pseudonym “Freedom Jones,” this movie about football guys going to cheer camp to score with the limber ladies is… watchable. It’s a silly male fantasy with 30-year-olds posing as high schoolers, the characters are all genre archetypes, and it ends up becoming an unbelievable romantic comedy, but it also feels like a throwback to the juvenile sex comedy buddy movies from the 1980s. The dialogue has a lot more zip and humor than I ever expected. Everything turns into a quip, in a substandard but less hyper literate Diablo Cody style. The main actors have fun spitting out the dialogue, and Fired Up! Is funnier than it has any right to be. At the same time, there are plenty of easy gags around homo-eroticism and a PG-13 atmosphere feels too tame for this kind of material. I don?t hate myself for liking this movie because it’s a step up from its cheer competition, but at the same time I’m not dumb enough to classify Fired Up! as anything more than a quizzically entertaining passer of time.