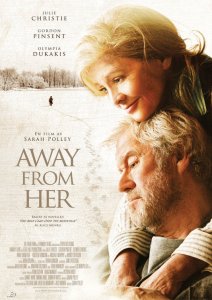 Actress Sarah Polley makes a remarkable directorial/screenwriting debut telling the story of a couple going through the late stages of Alzheimer’s. This is a truly adult tale that deals in the heartbreak of losing a loved one gradually and slowly. The film centers on a long-standing marriage that endures the hardships of becoming a victim in your own mind, first forgetting small things and then finally shutting down completely. While plenty of films have articulately dealt with the point of view of the afflicted, I feel Away from Her is one of the better perspectives on seeing the devastating effects of the illness from the spouse. The movie deals with its real world dilemmas in a respectful and realistic manner and Polley has put herself on the map as a thoughtful, mature, and engrossing talent to watch whenever she hops behind the camera.