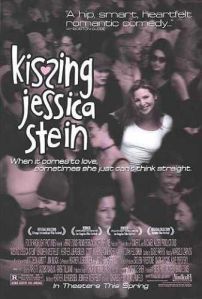 Kissing Jessica Stein stars Jennifer Westfeldt as the perfectionist title heroine searching for true love in the Big Apple. She answers a personal ad sent by Helen (Heather Juergensen), an art gallery manager trying her hand at women for the first time. What begins in comedic awkwardness turns to the fires of passion. Which leads to much more awkwardness as Jessica attempts to keep her secrets and the true identity of her “friend” from her mother.

Juergensen and Westfeldt wrote the script based on characters they have nurtured for several years, and their comfort level with the material shows. Each gives a wry and charismatic performance, with Westfeldt proving herself an acting revelation. It must be nice for her to have something else to her résumé than being one of the “girls” in Two Guys, A Girl and a Pizza Place.

Kissing Jessica Stein tiptoes a fine line with some characters possibly becoming gay or Jewish stereotypes; however, they never do fall into the abyss of Caricature Land. Tovah Feldshuh, playing Jessica’s mother, might make you wince at the thought that she’d be mired as a Mike Myers “Coffee Talk” portrait. But she has scenes where she shows real tenderness that is very affective.

At times the movie feels a bit too wrapped up in its own precocious-ness. There’s even a standard montage of bad dates that becomes annoying much sooner than it ends. Those looking for deep lesbian issues needn’t apply here. Kissing Jessica Stein hits its targets on a surface level, which can be deemed appropriate for an innocuous romantic comedy. The downer closing 10 minutes seems to come from nowhere and betray the feel of the movie.

The film plays by conventional rules for the most part but these don’t diminish the healthy humor in the least. Kissing Jessica Stein is a charming and fun experience and would serve as a good date movie for prospective couples.