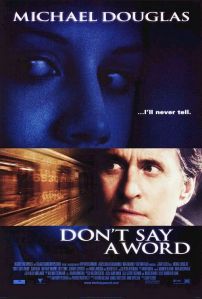 I don’t know about the marketers but something strange is taking place with the public recognition of Don’t Say a Word. At school, church, and home I hear it referred to often as the “I’ll never tell” movie. Which could be great for public awareness, what sinking that ending sing-songy whisper of Brittany Murphy into the populace’s mind, but what good is awareness if they think it’s a different movie?

Michael Douglas is the best child psychiatrist we have, but not only that, why he’s a loving dad as well. He gets called in to inspect a new patient Elisabeth Burrows (Brittany Murphy) who appears to be one loony nut to crack. But of course Douglas can because he’s the best. A team of foiled bank robbers kidnap Douglas’ child and order him to somehow dislodge a key sequence of six numbers stuck in the tortured head of Elisabeth. Can Douglas rescue his daughter and topple the bad bank robbers in the process and protect his disabled wife (Famke Janssen) in the process? Well of course. He’s the best damn child psychiatrist we have.

Don’t Say a Word is the type of film that leaves nothing to chance for the audience. It’s a film that paints with broad strokes, forgetting its massive plot holes and frequent missteps with logic, and spells everything out for the audience – but still fowls this up. Word is so by-the-numbers and predictable that it hardly ever muscles up enough of a fight to keep an audience’s attention. A female detective (Jennifer Esposito) is on the case and following the clues to find Elisabeth. We simply know that her only purpose is to come from nowhere and save Douglas in a tense exchange. The bad guys aren’t all bad; some make peanut butter and marmalade sandwiches. In the beginning robbery we know that it’s the past, why? They talk about football and U2 plays over the robbery! Surely this must be the early 90s!

Douglas spends most of the film either scowling at people or trying to look sincere, which comes off looking like an impatient child that has to go the bathroom. This is essentially a Michael Douglas film and I guess Michael Douglas plays the role of Michael Douglas with ease. Too bad the rest of the movie is full of people that look like they don’t know what they’re doing in this mess.

Janssen is confined for the entire movie to her bed. The movie could have expertly veered into her paranoia and feelings of helplessness stuck in her house while her daughter has been taken from her. Instead she’s merely pretty window dressing. The only purpose she has with a broken leg and confined to a bed is that we know that some bad guy will come down and she’ll have to hide and fight for herself.

Bean makes an adequate bad guy (as he did in Golden Eye) but he doesn’t have much to do except mug on a cell phone or in a speeding car. The rest of his posse is basically a central casting call for gang members, from the motor mouth black guy to the biker to the computer whiz. And all of these people are fighting, killing, and destroying mass amount of public property for a ruby the size of a fingernail? And where did they get all this money to pull off a scheme like the one they perpetrate on Douglas’ family? It’s like the team took a trip to Circuit City and bought the store.

Don’t Say a Word is really a thriller that doesn’t thrill, and one that causes you to smack yourself in the head at several eye-rolling moments. Douglas escorts his hospitalized and supposedly dangerous patient out of a hospital with nary a glance or tinge of trouble all because he pulled a fire alarm. Are we back in junior high or something? As well as the moment Douglas first spots Murphy he calls her out by dropping her arm but she supposedly had fooled a legion of trained medical professionals before? Word is a series of contrivances and mounting questions that never get answered.

Don’t Say a Word is so run-of-the-mill that its often times dull and void of life. The audience of Don’t Say a Word might come off thinking they have the power of Miss Cleo with all the predictions they’ll get right. It’s basically a recycling of everything you’ve seen many times before in better thrillers. Murphy’s performance lifts the bar occasionally but this is a dog that is in desperate need of being shot.