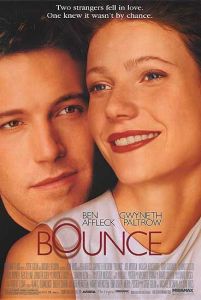 The romantic comedy genre is in a slum of development, it’s own personal ring of hell. It’s become a playing field with a paint-by-numbers coloring book. Color in this section blue for the ignoring bastard of a boyfriend that the heroine is attached to, color this section red for some “misunderstanding” to occur that shatters the perfection of the relationship for ten minutes before a wise-cracking best friend convinces otherwise and reveals their honest true feelings, color this part yellow for eccentric yet lovable colloquial supporting relatives… etc. You hopefully get the idea. It’s all been done before. But can you make a romantic comedy that sticks to the aforementioned rules but is still enjoyable in a non-brain sucking sort of way?

Ben Affleck plays a cocky ad guru with malicious flair. He’s brimming with confidence and a sly charm. One evening he encounters two strangers in an airport bar. One is a sexy blonde that Buddy works his moves to make his own layover. The other man just wants to get back to his wife and family for Christmas but his flight isn’t until the next afternoon. Buddy does the honorable win-win situation and gives up his ticket. The man cheerfully thanks Buddy for his generosity and beams about on his way toward the flight home. Buddy beams about on his way back toward a hotel bedroom. That is until he flips on the TV to see a news report of flaming wreckage that was supposed to be his plane. 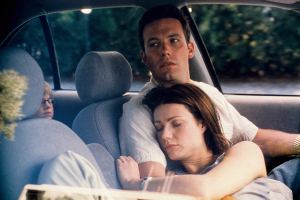 The realization of his close encounter with death and the grief of sending another man to replace him takes its toll. Buddy becomes an alcoholic and belligerent at an awards special where his agency is responsible for spinning the crash for the airline. After some time spent to recover buddy feels the personal need to search for the widow of the man he exchanged tickets with and see if she is doing okay. His widow is played by a brunette Gwyneth Paltrow and little do each think that they will fall in love with one another.

Granted, the story and all the so-called surprises that happen in it are telegraphed much sooner than their arrival. We know he’ll fall for her, we know she’ll find out, we know they’ll be a blow out, we know there will be a reconciliation. We just know. What makes Bounce surge from the formula is the ability of the actors and the wit of writer/director Don Roos. The sophomore film from the man who gave us The Opposite of Sex and lesser screenplays shows controlled and understated direction when dealing with the emotions of his characters.

Affleck quite possibly is showing his finest acting work yet. His Buddy runs the transformation of cocky socialite to a man haunted by grief and weary of his advances on the woman he accidentally widowed. The chemistry between Gwyneth and Affleck is electric and they mesh together very positively. In my later review of Proof of Life I mentioned how because Ryan and Russel Crowe fooled around during film that it didn’t transpire to anything on film. Well the past relationship of the two leads here sure as hell allows for some sizzle. Paltrow is quite fine as a harrowed widow trying to raise her boys. A scene where she slowly discovers the truth of her husband’s fate is wrenching. She also looks good as a brunette.

Roos may have to still play by the rules of romantic comedies but at least he utilizes skill to come away with something that doesn’t seem like Pretty Woman meets Random Hearts. And you know what Random Hearts could have used to make it a little livelier? A supporting performance by Johnny Galecki of course. Well, then again nothing could save that movie.