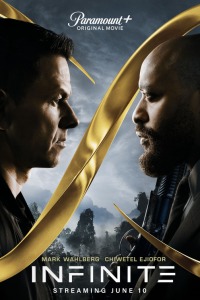 The cast and crew of Infinite were taken by surprise when their corporate overlords decided to shuttle the big-budget action movie to its fledgling streaming service, Paramount Plus. Fortunately for me, I had just purchased a yearlong subscription plan because I wanted to watch Bar Rescue whenever I pleased, so I was one of the lucky ones to gain access to this first “Paramount Plus Original Movie” as it quietly premiered. It might be for the best after all. Infinite is a high-concept action movie by committee that feels so lacking in just about every critical department.

Evan McCauley (Wahlberg) is a man suffering from schizophrenia, or so he believes. He has strange visions in his head from past historical time periods and he instinctively knows how to forge a samurai sword. He’s interrogated by Bathurst (Chiwetel Ejiofor) who recognizes Evan as an ancient foe that he has fought through multiple past lives. Bathurst wants to kill Evan before he can remember who he is and stop Bathurst’s evil scheme. Evan is rescued by Mora (Sophie Cookson, Kingsman) who informs him that he is one of the Believers, a group of immortals who get reincarnated after each death. They’re waging a secret war against the Nihilists, lead by Bathurst, who want to obliterate the world rather than be reborn into it again. Evan must relearn his many pasts and help the Believers recover a hidden doomsday weapon his past self hid.

You’d be forgiven if you thought you had watched Infinite before, perhaps in a past life, because it’s so highly derivative. The story runs on two very well-worn tracks of science fiction storytelling, the Chosen One plot and the Secret War plot. You’ve seen variations on both in plenty of familiar sci-fi action movies, comic books, and the central pillars for countless Young Adult titles. Think about being told this statement: “Your ordinary life has been merely an elaborate cover, and you’re no ordinary person but secretly a powerful and important [fill in the blank] and there’s been a war going on in the shadows between [fill in the blanks] and you’re the key to solving this ages-old conflict.” I bet many of you can already think of similar titles that apply. There’s Harry Potter and Highlander and The Matrix and the Assassin’s Creed series and even more specific examples like Wanted, where it too features a sexy woman rescuing our lead in a sexy car and fending off bad guys while she informs him of his secret true calling. Even Ejiofor was in a strikingly similar movie just last year, 2020’s The Old Guard. It’s all so vaguely familiar at every moment that you’ll question whether it’s all built from spare parts.

Then there’s the added reincarnation angle, where people have amazing skills that they never knew they possessed (The Matrix, Wanted) and souls going from host body to host body (Cloud Atlas). In fact, David Mitchell, the author of Cloud Atlas, essentially wrote this very story in his 2014 novel, The Bone Clocks. In that novel, we learn that there are two factions of immortals who are reborn after every death, one group that preys upon the souls of mankind and another trying to defend the innocents. That book explores a lot more in the realm of identity (characters are reborn in different genders and races), time, and purpose than with Infinite, which settles for a recycled B-movie doomsday plot that even video games are getting tired of now. If past lives and reincarnation is just another disposable gimmick for super powered beings duking it out over a cataclysmic MacGuffin, then why bother with the existential possibility of the premise?

For a movie that takes so much time to spit out clunky exposition, Infinite is fairly incoherent and, occasionally, self-defeating. When you’re entering any new territory, there’s going to be a learning curve. Imagine how Neo learned about his misconception of reality, the war and history with the machines, and his capabilities he was opening himself up to. Exposition is best done in portions equally spaced out and tied to action, so our characters can learn through doing and failing and then succeeding. With the gimmick of past lives, it could open up such intrigue and possibility about human potential as well as the difficulty of these immortals finding one another across the globe for centuries, restarting with every rebirth (a fact explored in The Bone Clocks). It also would lend itself to characters being reckless with action movie stunts because, at worst, they die and take a twenty-year or so timeout before getting back into the action. Nothing of real interest happens with the past lives gimmick. The movie treats it as a shortcut to give its characters superpowers, and by tapping into those memories, now they have all these crazy super abilities that no mortal could accomplish in merely a single lifetime (sorry Bruce Lee). Imagine if in The Matrix, instead of Neo learning and training that they just uploaded everything into a Chosen One 3.0 security patch they downloaded (yes, he downloads skills, but we see the process demonstrated as visual progression). It’s boring to watch. The movie even could have explored more about these past lives, experiences, and lessons learned rather than in kaleidoscopic flashbacks. For the entire premise, Infinite seems so strangely limited in scope.

Then there’s the plot device that destroys the scheme of the villains. The Nihilists are tired of the eternity of being reborn and stuck with the accumulation of their memories. Bathurst says when he begins anew in the womb, he is a fully cogent adult brain and it’s nine months of torture. This, ladies and gentlemen, is the only interesting component in the entire movie that relates to the reincarnation premise. The Nihilists want to destroy all life so then they can never be reborn again, though this still seems theoretical. They have also developed a special device that will store a person’s consciousness onto a computer hard drive or microchip, supposedly stopping that consciousness from being reintegrated into a new host body. If this is the case, why isn’t Bathurst and his Nihilist fellows taking advantage of this? They’ve already developed a solution that works and doesn’t involve the destruction of all life on the planet. I don’t even know why Infinite introduces this absurd plot mechanic considering the damage it does. I guess it was an attempt to raise the stakes with immortals where death isn’t permanent, but for the purposes of the movie, a death means they are taken out of this present fight for the fate of the world. The stakes are still there. The implications are also nebulous, as they talk about souls as currency but can human souls be downloaded onto a portable technological deice? This entire plot device is silly in conception and even worse in execution, with big swirly bullets that also glow as they zip along.

Wahlberg (Spenser Confidential) is on autopilot for the entire movie. He’s laconic and nonplussed and without any hint of humor or fun to be had. His under-performance is compensated by the overacting of Ejiofor (Doctor Strange) in a disastrous dynamic that reminded me of the 2011 Oscar hosting performance by the tandem of James Franco (under performing) and Anne Hathaway (over performing). At least Ejiofor is holding my attention with his high energy level and a maniacal glee that reminded me of James Bond villains. The problem is that nobody else is delivering this same arch level of camp. Everyone else in the cast is trying to play things so icy cool and nonchalant, and it just makes all the characters feel like boring robots.

And yet all of this could be forgiven if Infinite had some memorable and exceptionally exciting or well-developed set pieces to entertain. Much can be excused or mitigated if an action movie delivers upon its action. Alas, Infinite cannot escape the orbital decay of its lack of imagination. The derivative nature extends to the action, which consists of a series of rote chases and gunfights. There is one sequence that had promise for the scale of its destruction, a car chase through the different floors and levels of a police building. It’s viscerally entertaining to watch all of the many things gets smashed while raising the question just how fragile concrete walls are constructed to be in downtown metropolitan architecture. This is also the moment that Evan is brought into the new world, which means it’s all downhill from here. Antoine Fuqua (The Equalizer) is an action genre veteran and can be counted on for some degree of style to jazz up the proceedings, but he can only do so much with sequences lacking points of interest and tension. Infinite would play better as campy nonsense, but it won’t acknowledge this identity.

Given how derivative everything appears, it’s surprising Infinite is based on an original work, the self-published 2009 novel The Reincartionist Papers by D. Eric Maikranz. The author offered his readers ten percent of his advance for whoever helped get him to sell the film rights to Hollywood (true to his word, Maikranz paid out in 2019). Already, this is more entertaining to me than anything provided in the 106 plodding and incoherent minutes of Infinite as a movie. The high-concept premise is reduced to a lazy shortcut for superpowers for a group of know-it-alls trying to act cool and strut while delivering exposition by the truckload. The action is stifled, the characters are dull, and the world feels so sprawling but without needed definition. This could have been any combination of Chosen One and Secret War story elements. What about Harry Potter battling the bullet-curving killers from Wanted? Or what about Neo facing off against the ancient society of werewolves and vampires in sleek lather catsuits? Or an immortal special ops crew that must track down other immortals before they can do lasting harm? This mix-and-match formula belies how truly interchangeable the story elements are with Infinite. It closes on voice over by Wahlberg that genuinely made me guffaw. Looking to the future, he says, literally, “Well the possibilities are… infinite.” For this hopeful film franchise, I strongly doubt that.