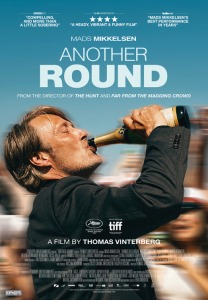 In one of the best lines in The Simpsons‘ history, Homer Simpson makes a summary toast: “To alcohol, the cause of –and solution to—all of life’s problems.” This edict populates the Danish comedy Another Round, written and directed by Dogme 95 co-founder Thomas Vinterberg (The Hunt, Far From the Madding Crowd), who recently earned a surprise Academy Award nomination for Best Director. The movie follows a foursome of middle-aged school teachers trying to reclaim their lost mojo, chief among them Martin (Mads Mikkelsen), a history teacher who feels adrift as a husband, father, and an educator. A friend mentions a theory from an obscure academic that human beings are born with a .05% blood-alcohol deficiency, and to operate at peak performance, a person should regularly imbibe a serving of alcohol to maintain a buzzed feeling. Martin and his three friends agree to live this experiment, sneaking booze onto school premises, and then pushing further, raising the blood-alcohol minimum to see if they can keep up.

In some ways, Another Round feels ready-made for the kind of wacky ensemble comedy territory on the peripheral of drama, something the likes of a new Judd Apatow comedy (Knocked Up), and I wish that this Danish film had followed a more mainstream and crowd-pleasing approach. I know that sounds sacrosanct, the American film critic decrying the foreign film and wanting it to be filled with more dick and fart jokes, but this is because I see the true comedic potential at play, and I know an artist with the sensibilities of an Apatow or even a Greg Mottola (Superbad) could crush this. Labeled as a comedy, Another Round is more “comedy” in broad theory than execution. You would think a group of middle-aged school teachers testing a theory about operating at peak efficiency while being buzzed from booze would lend itself to all kinds of amusing, hilarious exchanges and set pieces where the men cause trouble and get into unexpected shenanigans while trying to keep their secret. The appeal would be watching this group of men cut loose in a way that feels liberating, pushing them outside their comfort zones and discovering something about themselves and their capabilities before, of course, the dark side and going too far, chasing an increasing high. I feel like many readers can picture the Apatow comedy right there. The problem with Another Round is that nothing is ever really funny. There’s the brief occasion of physical slapstick and even briefer encounters of the men behaving goofy, caught up in their feel-good vibes. But mostly the movie is devoid of recognizable comedy, even awkward, cringe-inducing comedy. It feels like the filmmakers said, “Let’s tackle a premise that seems like an Apatow comedy but let’s play it mostly straight and see how it goes.” Well, it went.

As far as a drama, I also found Another Round to be promising but ultimately lacking. We don’t really know the supporting characters before they begin their experiment, particularly what is holding them back or what obstacle they seem to perceive is holding them back. This is a movie about drastic change and how it affects these four men, and yet we barely know where they are starting off to contrast how the experiment affects them, good or bad. The men all seem to have succumbed to a general malaise and the joy of teaching has left them. Once they begin the experiment, they find that joy has emerged and they are more engaged in their classrooms, more adept at connecting with their teen students and keeping their attention, and more likely to make the learning meaningful and impactful as it relates to their dreaded high-pressure finals. Really, it sounds like, on paper, that these men use this opportunity to simply become better teachers because they allow themselves to put more of themselves into their teaching. The men don’t seem beholden to superstition, feeling they need the alcohol to be the most effective teachers, so one would think they could take the experience and learn lessons about how they can reclaim that feeling of purpose, of being an effective educator without the catalyst of alcohol to get them there. Without a more meaningful picture of these characters and their personal ennui, it makes the experiment feel inconsequential, as if it could have been anything else that shook these men from their general malaise. It takes away from the drama of what these men went through and what it might have cost.

I suppose if the comedy was going to be muted, I was expecting Another Round to be more dramatic. Martin is our main character and his rocky relationship with his wife serves as the heart of the drama; he wants to reconcile after being too removed. We root for him but we’re not really invested. The bigger drama isn’t even involving Martin. One of the guys in the group becomes a cautionary tale of descent, not seeing a reason to stop drinking, and his downturn is played with such nihilistic certainty for tragedy that it seems strange how nobody intervenes. It would play more emotionally if this character was better developed. The other characters are missing clear arcs and more interesting and relatable character moments. I can envision the kinds of supporting characters under this scenario that populate the Apatow version of this premise, each a reflection of a different kind of malaise, each a different personality, and each finding room to progress on an arc where they learn lessons both good and bad but come out wiser. The start is right there, but without making the most of the shared time, it feels like we’re hanging out at a party with people we barely know and overhearing an anecdote we’re missing vital info from.

Mikkelsen is best known stateside for his intense villainous roles (Hannibal, Doctor Strange) and as the occasional flinty badass (Polar, Arctic), so there is a degree of appeal to watching him play a normal school teacher. Mikkelsen is solid throughout and really shines when the character’s inner life returns, thanks to alcohol and then, later, his own sense of self-worth. It’s sturdy but unremarkable acting, notable for its normalcy and the edges of humor we don;t usually see from the actor. Much is built upon Martin’s past jazz ballet class and this is the closest thing the movie has to a comedic payoff, finally gifting the audience with the sight of a joyful, fluid Mikkelsen prancing across the screen at the very end (the actor actually has legit ballet training). It’s a fun sight but, as the film’s biggest comic payoff, it’s not exactly one that could sustain your built-up imagination.

Another Round is a fine movie about friendship and recovering one’s lost sense of self, but as a comedy it’s not very funny, and as a drama it’s not very dramatic, and so it feels stilted, stuck between both realms and just kind of bouncing around a miscalculated middle-path. You won’t be angry by what you’re watching from Vinterberg and the actors but you might not be hooked. Given its surprise Best Director Oscar nomination, over the likes of Aaron Sorkin, Regina King, Spike Lee, Florian Zeller, and Darius Marder, I think I was expecting something more bracing, something more intellectually engaging, and something where the vision was so perfectly predicated by the precise tone of its nominated director. I’m sorry to say, dear reader, but I just don’t see it. I cannot see what on screen lead to Vinterberg’s unexpected nomination over a crowded field. I cannot see what on screen convinced people Mikkelsen was a Best Actor contender. I cannot see what on screen makes Another Round the odds-on favorite for Best International Film, especially in a category where Romania’s Collective is also competing. Maybe I’m just not the right audience for this movie. Maybe I was expecting too much. Maybe I’m just being unfair. It’s possible, or it’s also possible that this heralded foreign film has a muted identity crisis that saps away its comic and dramatic potential and my potential entertainment.