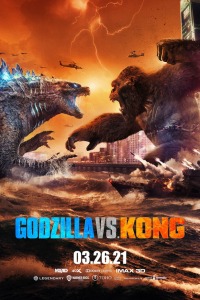 Godzilla vs. Kong is the kind of movie where you need to question what your qualifications would be for its true entertainment value. Four films into the fledgling MonsterVerse, we’ve set up its Batman vs. Superman, its Infinity War, its climax, the biggest names on the biggest stage to settle the score once and for all. With indie director Adam Wingard at the helm, best known for peculiarly violent genre-defying movies like You’re Next and The Guest, the results with G vs. K (I’m not writing the full name every time) strictly fall into the realm of dumb fun. It’s up to you which of those categorical designations will reign supreme, the dumb or the fun.

The gigantic 100-foot tall ape Kong is being kept in a caged atrium by the Monarch organization. Godzilla is running amuck and attacking a shady company that may have a shady conspiracy afoot. Kong and Godzilla are two alpha predators, the last known titans, and it’s believed that Godzilla is seeking out Kong to put him down for good. The government is trying to protect its great ape, figure out why the big lizard is acting up, and maybe explore this kooky Hollow Earth theory. There’s a reason I haven’t mentioned any human character names because, once again, they don’t really matter. 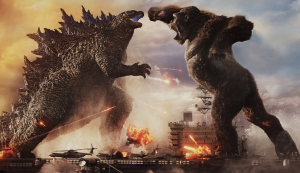 This movie is going to entirely depend on how much your love of monster brawls can, essentially, push aside crazy, incoherent plotting and meaningless human characters. If you’re the kind of fan going to G vs. K and expecting nothing else than bruising knockdown fights that decimate the landscape and ensure untold death, no matter how many times we’re told the entire city of Hong Kong has miraculously evacuated in minutes, then the movie delivers. There are three big brawls and each one of them is satisfying and has a weighty quality to them; they really do feel like heavyweight title fights, with each side giving it their all and then some. It’s an epic showdown and we demand the best from this clash of the titans, and Wingard comes alive during these sequences, finding stylish ways to demonstrate and develop the carnage so that the brawls feel unique rather than stale. Each of the three major battles takes place in a different location and uses that environment to its advantage when developing its action particulars. The first bout is at sea and Kong is chained to the galley of a warship, so Godzilla capsizes the ship, attempting to drown Kong. The water is also a far more friendly place for Godzilla, with Kong forced to jump from ship to ship like platforms in an old school video game. The rematch takes place in downtown Hong Kong and offers the traditional metropolitan cataclysm we’ve come to expect from disaster escapades (again, with vague reminders that somehow all these buildings are empty). Godzilla’s fire breath becomes a laser field that Kong must avoid with drastic escapes. Wingard’s camera finds fun ways to communicate the back and forth, at one point seemingly attached to the monsters as they pummel and move, like an arty Darren Aronofsky film. He finds ways to make two age-old creatures fighting still appear visually fresh and exciting. When the creatures are slugging it out, G vs. K is at its best as big-budget popcorn escapism.

I also must applaud that filmmakers that, four movies in, we finally have monster fights where the audience can see what is happening. 2014’s Godzilla reboot kept teasing the big lizard and giving glimpses, a foot there, a closing door here, that built anticipation but also tried audience patience. My biggest complaint was I wanted more Godzilla in my Godzilla movie, and 2019’s King of the Monsters answered this complaint, providing four different monsters to duke it out for monster supremacy. However, the supernatural slug-fests were undercut by sequences that were hard to see. Whether it was in the rain, at night, in a blizzard, in the fog or smoke, it was hard to tell what was happening because of all the annoying visual obfuscation. We had more monster fights, yes, but they weren’t that much easier to see than in 2014. Thankfully, this movie seems like a direct response to that chief criticism. The big fights take place entirely during the day, and not only that, it’s clear and even sunny, making sure we can soak up every loving CGI detail of these two giant pretend creatures having their big pretend rumble. It may sound like I shouldn’t be too congratulatory for a franchise that dares to allow its paying customers to actually see the spectacle that they paid to see, but after several other films of mitigating results, I’m happy we at least can enjoy the big brawls after so much build-up and delayed gratification. 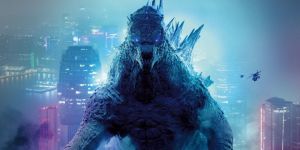 But if you expect more from a versus film other than predicated pugilism from your preferred participants, then G vs. K is going to disappoint. It is a vast understatement to say that this movie is extremely loony. It is so goofy that you will either shrug and go with the silly twists and turns, or you’ll be like several of my friends, and my girlfriend, who just stared stupefied and shook their heads, muttering how much more crazy-pants bananas things could possibly get.

For a franchise that started fairly grounded in 2014 from a science standpoint, and whose sequels have more or less hewn to that tonal vision, G vs. K says, “Hey, what if we…,” and injects whatever it deems might be insane and awesome, like an improv game that never meets resistance. Whatever you may be prepared for, this movie goes deeper and crazier. It literally goes to the center of the Earth and back. If I were to describe the parameters of the final fight, it would sound like I was drunk or needing of mental check-ups from concerned loved ones. It feels like the Asylum version of what a Godzilla and Kong match-up would be, and by that I refer to the low-budget studio known for its schlocky knockoffs and crazy all-you-can-eat buffet-style sci-fi plotting. There’s one solution that literally involves dumping alcohol onto a computer. Again, maybe your exact sensibilities will be a match for this wilder, sillier tonal wavelength; maybe you felt the earlier MonsterVerse entries took themselves too seriously. I’ll readily admit that they devoted far too much time to human drama I felt was, no pun intended, irritatingly small-scale. 2017’s Kong: Skull Island is the high watermark for this monster cinematic universe, and definitely better than you remember, and it didn’t take itself too seriously but found an agreeable baseline that allowed the film to have its spectacle while holding the human drama to be meaningful and entertaining itself. The movie was stylish, fun, and your brain didn’t melt when the big creatures were off-screen for long duration.

With G vs. K, any sense of established connectivity with the other movies is thrown out the window. Sure, there are faces that reappear (hey, Millie Bobby Brown), but they might as well be new characters. Even more than that, the tone of the movie is shifted so forcefully into self-parody, cheesy ludicrousness, including a spaceship serving as a moving defibrillator and psychic skulls, that it’s hard to take anything remotely seriously. I can already hear some detractors saying why should a movie about a giant ape fighting a giant lizard ever be taken seriously, and maybe you’re right you detractor you, but every movie needs an established baseline to provide a foundation of what is real, what is meaningful, and what is exceptional. If everything is crazy, it makes the monster action seem more mundane, and if anything can happen at any moment, it makes the plotting less important of careful setups and development, and satisfaction will be capped. 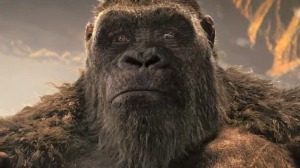 If you’re just looking for a movie about a giant ape punching a giant lizard with top-notch special effects, well Godzilla vs. Kong has that aplenty, and if that’s enough for you, then enjoy. It’s far more of a Kong sequel with the occasional special appearance from Godzilla, so if you’re more a fan of the big lizard you may be a little miffed at the big guy being a second banana. The action is fun and splashy, and I wish I watched this titanic title match on the big screen where it belongs, and I’ll admit that likely has dulled some of my experience. The sharp tonal shift for the MonsterVerse, and the escalating silliness that climaxes into insanity is either going to be selling point or a breaking point for every viewer. You’ll either rock with glee and happy that this franchise has finally evolved into the schlocky spectacle you’ve been dying for, or you’ll be trying to hang on to the silly, over-the-top plotting to orient your staggered senses. Godzilla vs. Kong is everything the title suggests and little else, and for many that will be enough. For me, I think it kind of lost me somewhere between here and Albuquerque.