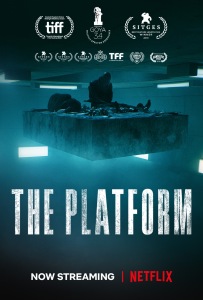 What better time to Netflix and chill than when the state is demanding it? I recently watched The Platform, a Spanish sci-fi flick steeped in mystery and metaphor. Get ready for what could be dubbed “a vertical Snowpiercer.”

Goreng (Ivan Massague) wakes up in what looks like an endless stone tenement building. There are two people per floor and a large hole in the middle of the room. The food arrives via a descending platform that begins as a feast. Each floor has two minutes to eat, cannot hoard any food, and will have to subsist off what those above them left behind. Goreng’s floormate, Trimagasi (Zorion Eguileor) is one month away from being released from his time. He also might be losing his mind and definitely resorted to cannibalism before. Goreng has to decide what lines he’s willing to cross in order to survive and also to protect others.

The metaphors for The Platform are very heavy-handed and obvious but that doesn’t mean they aren’t effective in their blunt force. It’s a literal dystopian tower of human beings with the lower floors eating off the spoils of those residing above them. There’s only so much to go around but charity isn’t on the mind of too many of the residents. Better to feed when you get an opportunity than worry about who comes after you. Goreng asks about trying to talk to the neighbors above and below and this notion is scoffed at by his floormate. The people above will not talk to them because, simply, they are beneath them. The ones below Goreng and Trimagasi? Who cares, they’re beneath and thus inferior. Trimagasi takes a wine bottle and smashes it rather than let the men below him have it. Why perform this spiteful action? “It’s what’s been done to me,” he says without irony. I’m reminded of the reticence some have about easing student debt and other penalties; “I had to suffer, so why should these people not have to suffer the same?” The disregard seems to fluctuate depending upon how close one becomes to the prized top floor. Every month the inhabitants will randomly change floors, so someone who was closer to the top must now reconcile with being lower, and the food only goes so many floors before it’s picked clean. This perspective of being on the bottom doesn’t so much alter behavior as engenders a ravenous sense of “get what you can when able” to pervade. The people so many floors down will simply never even be granted the opportunity to eat unless those above change their consumption habits and sense of empathy. Nobody even knows how far down the floors go. 150? 250? More? Where is the proverbial bottom? 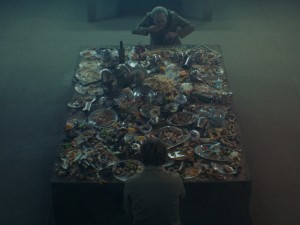 The story is kept in a vague explanation but that doesn’t stop the fun. We enter with Goreng and learn as he does what this place does to its people. He learns the rules of this new reality which is part dystopian prison, part game, part experiment. The stated utility of such a place is rather hard to fathom, so it’s best that screenwriters David Desola and Pedro Rivero keep the action confined to simply exploring the world within the vertical structure. There are a handful of flashbacks showing the interview process to enter the facility (Trimagasi is shocked to learn his floormate volunteered to enter such a place) but they are brief and could have been excised. This is one of those sci-fi conceits like Cube where the location is the story and simply learning more about how the day-to-day operates, its rules of functioning, its punishments, and the dangers is where the real draw of the story comes from. With the monthly reallocation, the movie keeps things interesting by dramatically changing Goreng’s standing. Just as it feels like he’s understanding his surroundings, they change, and force him into a new dilemma. When he’s stuck on a far lower floor one month, will he resort to cannibalism to survive? When he’s high above, will he use his fleeting power to enforce some social justice on the floors below, ensuring that lower floors get an opportunity to dine by rationing the food? Each new placement keeps things interesting and challenging for our protagonist, which is what good sci-fi should do.

Because of its general vague nature, The Platform relies more upon the strength of its ideas, metaphors, and discovery than on its structure for answers. There really isn’t an ending here. There is an end but it’s more symbolic and implicit than definitive, which makes sense considering that the preceding 94 minutes is running off metaphor and mystery primarily. The last act becomes either a foolish or brave attempt to make a difference despite the unique conditions of the location. The characters have theories and rumors, as well as a nagging suspicion that something has gone wrong from the original design, but they don’t know like the rest of the audience whether or not change is even possible from above. The ending is pretty open-ended and left to interpretation whether or not this attempt would even be recognized. Do the people who engineered this whole experiment/prison really care? It can spark discussion with friends but it’s also a development that might leave as many viewers unsatisfied by the lack of substantial answers or anything that can be viewed as definitive. Much like Cube, the space just carries on with more bodies and that invites sequel potential as well as a feeling of inertia that could also frustrate. 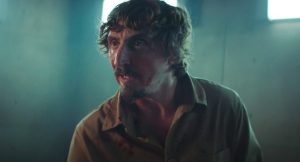 It’s a very limited space to work with but director Galder Gaztelu-Urrutia has style to spare. The general claustrophobic setting is played to fine effect but the bizarre touches are what makes the movie feel almost like it was ripped from the world of anime. The floating table, so affectionately adorned with fine foods and platters, is such a startling central image. The red-light late-nights conditioned me to be on edge because of the danger of the flying platform returning. The gore is sporadic but very effective at ratcheting up the suspense or horror. There’s also the subtle visual comedy of discovering as we travel from floor-to-floor the personal items each inhabitant has brought with them for their extended stay. I loved the absurd nature of some of them, like a surfboard or a child’s inflatable pool. Why would people bring these items?

I’m glad Netflix is able to bring small, strange, foreign movies like The Platform to, arguably, the biggest audience platform in the world. It’s an easy movie to plug into because there is much to unpack and learn. I was never bored throughout its brisk 94 minutes. Even as the movie’s metaphors are heavy-handed, the movie doesn’t become so in execution. It’s operating on a pure level of discovery and rejecting the status quo. There is plenty of room to score easy connections with its thematic interpretations but the movie still just works even as a collection of vignettes in a very strange setting. It’s not in the same level of ambition as Snowpiercer but I’d place it on par with the byzantine Cube series. The Platform is an enjoyable movie that may not be rich in much than its themes and mystery, but during our national time of need, 94 minutes of well-executed weird can be just enough to satisfy the soul.