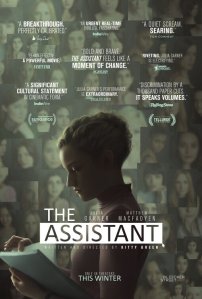 Jane (Julia Garner) is a young woman serving as an assistant to a high-profile film and TV producer, the kind of man with plenty of pull within the industry. She’s the first one into the production office and the last one out at night. Little by little, a larger picture forms of her temperamental, vindictive, and lecherous boss, especially as young women seeking to get ahead in the entertainment world as carted before him like sacrificial offerings. What will she do when the offending evidence becomes too much to ignore?

Where The Assistant lost me was in its lack or urgency with its storytelling. This is the slowest of slow burns, and it’s understandable, to a point, why this approach is the more realistic path. We’re watching the decades of inertia that make anyone standing up to harassment and abuse very difficult to find any traction or credibility. It’s much easier to just shrug it off, say “that’s just the way this awful man is,” laugh it off like some of his peers, ignore it like others, or compartmentalize, justifying your complicity as symptomatic of just how the industry works. I was waiting for the slow reveals to finally form a picture for our protagonist and push her into action, a desire to do something or say something about what she can no longer ignore or assist. The movie gets us to this point and, in its best scene, smacks her down for even seeking out this oversight. From there, the movie just becomes another repeat of what happened before, with more clues about the bad behavior of Jane’s boss, but it’s more of the same and then it just ends. I think writer/director Kitty Green (Casting JonBenet) was going for ongoing ambiguity whether or not Jane ultimately decides to leave her entry-level position or swallows her moral turpitude. However, there is a frustrating difference between an ending that is openly ambiguous and one that feels incomplete and lacking. After everything I went through, a little more definition by the end could have made the slog of work details more palatable.

This subject is bursting with pertinent urgency and social commentary and I feel like this movie is just missing so many important things to say and do in the name of misplaced indie understatement. Understatement can be fitting as an approach to real-life dilemmas but The Assistant is understated to its unfortunate detriment, traversing from subtlety into somnolence. More time is spent establishing the mundane details of Jane’s office duties than the harassment and protection afforded to her boss. I was expecting to collect little telling details, like the male assistants’ patterned ease of composing “apology e-mails” for whatever indignation the boss feels, but we’re absent a certain momentum throughout. The first thirty minutes is packed with moments like Jane making coffee, Jane tidying an office, Jane getting food, Jane answering phones, Jane microwaving a cheap dinner. We never see her at home from the moment she leaves in the opening of the film. It’s like the movie is saying she lives at the office or must if she is to get ahead in a broken system of people using people. The people passing through are superficial to us, never more than pretty faces, or important names coming and going on the peripheral. I was feeling crushed by the obsessive details of this work routine. I expected to establish a pattern, establish a baseline, and then move from there, forcing change or at least reflection. The mundane details are meant to convey the soul-crushing nature of Jane’s job, being on the bottom of an industry she’s desperate to break into, and how un-glamorous the life of the little people can be. But she’s also a gatekeeper of sorts for the line of future victims encountering her bad boss. There’s a degree of culpability there, and it’s never fully explored because of how underplayed every moment and every scene comes across, choosing mundanity over drama. I would not begrudge any viewer if they tuned out The Assistant after the first half hour of work.

There is a noticeable feeling of dread and discomfort in the movie, but without variation or escalation it feels almost like a horror movie where we’re stuck with the person on the other wall of the action just briefly overhearing things. Imagine Rosemary’s Baby but if you were one of the neighbors just wondering what was going on. There’s an important message here and the point of view of an up-and-coming young woman as the assistant to a Harvey Weisntein-esque monster and her moral quandary of how far to ignore and how much she is willing to suffer is great. That’s a terrific, dramatically urgent starting point, and yet The Assistant is too muted and padded. There’s a remarkably thin amount of drama during these 85 minutes, with the more intriguing and disturbing action kept in the realm of innuendo and suspicion. It makes the final movie feel like the real movie is on the fringes of what we’re seeing and we just need to nudge back to the drama.

There is one fantastic scene in The Assistant and it happens at the end of Act Two, and that’s when Jane finally seeks out the HR rep, Wilcock (Matthew Macfadyen). You sense just how much she wants to say but how much she feels the need to still be guarded, so minute by minute she tries a few more scant details, all that’s needed to limit her vulnerability and exposure. Wilcock seems like he might just take her words seriously, and then he interrupts to answer a phone call, and it’s an obnoxiously unimportant call and his behavior merges into just “one of the guys.” From there, he turns the heat on Jane, laying out her circumstantial claims and questioning what her future plans are and if this is the best course of action to see those plans through. It’s the company line sort of pressure and you feel Jane retreat within herself as soon as this potential ally becomes just another cog in a system to enable abusers. Garner (Ozark) is never better than in this scene, where the understated nature of the film, and her performance, really hits the hardest. It’s the quiet resignation and heartbreaking realization that the system is designed to protect itself. I wish the concluding twenty minutes had more of the drama that this scene points to as its direction.

The Assistant had a lot of things going for it as a queasy indie drama and it’s still well acted with searing details and a strong sense of authenticity. I feel like that authenticity, however, gets in the way of telling a more compelling and affecting story. I’m here to see the pressure, torment, and decision-making of a young woman put in an unenviable position, and what I was given was an hour of office tasks and eavesdropping. It’s got its moments but it left me wanting more.