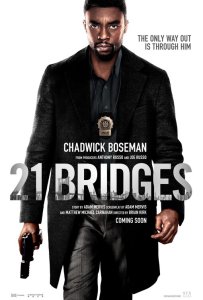 21 Bridges would have been a more interesting movie if it had simply been a conversation between the police detective, Andre David (Chadwick Boseman), and the mayor of New York City as he proposes shuttling all twenty-one bridges leading out of Manhattan to catch a pair of cop killers. My pal Ben Bailey surmised it should go with the mayor flatly refusing and telling them they should use actual police investigative work to catch the criminals, like all casework, instead. It’s not like Manhattan houses millions of people with deep subway networks and somebody could remain unseen for some time, or the fact that there are more ways off an island than bridges. This concept doesn’t even factor into the story in a meaningful way; the police could have just as easily used the bridges as checkpoints for the difference it makes. This eliminates the ticking clock factor. Another miscalculation was splitting so much of the narrative between the two sides, Andre and the cops doing the hunting, and the criminals trying to run away. I’m not emotionally invested in these guys escaping, and it doesn’t ratchet tension as the cops get closer. If anything it alleviates tension as I know we’re closer to them being captured. The shootouts, foot chases, car chases, and machismo barking are all serviceable from director Brian Kirk, a veteran of television. It’s fine if this is a genre you enjoy but there isn’t anything new in 21 Bridges, or anything new that works, to open up that entertainment for anyone else. It’s entirely predictable every step of the way, enough that I was correctly guessing the real villains before the movie even started. The actors all do respectable work. It’s all competent from top to bottom, but it’s in service for a forgettable by-the-numbers cop thriller. I have to believe the original script for this was something more daring, perhaps opening up Andre’s character and his reputation as a “cop killer killer” and what effects that has had on him. He really shouldn’t be the hero. He should be the guy who comes to learn his culpability in being part of a corrupt system of justice, pushing him toward an anti-hero reclamation arc. What we get isn’t even close to that level of character exploration, so I must believe 21 Bridges was noted to death by studio exec mismanagement. Otherwise what did the star of Black Panther and the directors of Avengers: Endgame see in this story that urgently had to be told on the big screen? It feels like some relic from the 90s that would have starred Wesley Snipes and absent any modern commentary on the role of a police state in urban communities. Alas, you get what you get with 21 Bridges, which could have been 18 Bridges, but some exec must have said, “No, that’s not enough bridges. But 30 is too many. Gentlemen, were gonna stay up all night if we have to in order to solve this number-of-bridges conundrum.” If you have a soft spot for this kind of thriller, you might find some fleeting moments of entertainment. Everyone else can look away.