At its core, The Curse of Lilith Ratchet is a low-budget horror movie stuck between two paths of entertainment and sadly reaching neither. It could have been a genuinely good horror movie, one where its concept begets creative ingenuity, like a Lights Out or Final Destination, where the set pieces are well developed, the characters are interesting and meaningful, and there are pertinent themes linked to character to make the horror more immediate and impactful. Or it could have gone a completely different route and declared itself a schlocky horror movie, owning a trashy flair of fun while doling out exploitation elements of sex and violence to provide the prurient thrills of genre satisfaction. Unfortunately, Lilith Ratchet isn’t good enough to be legitimately good and it’s not knowingly bad enough to be particularly entertaining. It’s just another disappointing low-budget horror movie with too little thought given to its story and characters and horror sequences.

A group of friends steal a shrunken head belonging to the notorious Lilith Ratchet, a Civil War-era woman who murdered her cheating husband with an axe and was then killed herself. She would curse anyone who would say her name and attached nursery rhyme. Alice (KateLynn Newberry) and her pals offer the famous head to popular paranormal radio host, Hunter Perry (Rob Jaeger). He broadcasts from a dance club for a special Halloween show and brings in volunteers for a game of hot potato with the shrunken head (again, this is designed for an auditory medium, which doesn’t seem wise). The evil spirit roams the Earth, striking down in order those who held her shrunken head, and Alice scrambles for a potential way out. 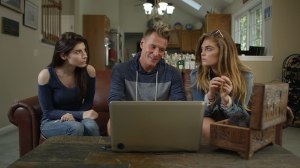 Here’s an example that hits both areas I cited above as it concerns that middle ground between well-developed horror and schlocky camp (mild spoilers I guess). Our first Lilith Ratchet victim, after the prologue, is abruptly run over by a car. This news does not reach his girlfriend, Lauren (Brianna Burke), until Alice delivers it in person, which seems beyond bizarre to me. Side note: cell phones do not seem to really exist in this universe. They do appear every so often, but when it comes to reaching others during times of crisis, or distributing key information, nobody picks up their phone to dial or text. They instead wait to hear face-to-face, and that consistent delay of communication breaks the tenuous reality of the movie. Writer/director Eddie Lengyel (Scarred, Mother Krampus 2) might as well have set the film during the 1980s or beforehand if modern technology matters so minimally. These characters are still talking about a popular radio show; not a viral podcast but, an alternative radio show. It doesn’t quite feel of today.

Back to my example, Lauren is informed her boyfriend has died. She retreats indoors to take a long bubble bath. She doesn’t exactly seem too broken up after her immediate response but hey we all grieve in different ways. Now, considering we’re dealing with a supernatural presence, why not take the form of the dead boyfriend? This would make the encounter more personal; the spirit could dig into Lauren’s suffering and perhaps any feelings of guilt, it would be an opportunity to open her more up as a character before her inevitable death, and it would simply be more interesting. Sadly, the film doesn’t go this route. Instead, she lounges in her bathwater and oblivious to the Big Scary Lady walking around the room. Then she’s violently pulled into the water and released, and this happens maybe four times. I don’t know about you but if I’m being yanked by a malevolent spirit in my bathtub, I’m getting out of that tub quick. Lauren leisurely tries to catch her breath. So, if we weren’t going with the more character-focused and developed death, then we should go for something memorable or truly horrifying. Instead, we get a woman being pulled under her bathwater and it happens three to four times. It’s not interesting and it becomes repetitious to the point of unintentional comedy. It’s also a bathing kill that veers away from T&A or anything too tawdry, which means it fails to register either as effective, engaging traditional horror and as schlocky, fun, campy horror. It just made me think of the obvious homage to Nightmare on Elm Street and then it didn’t offer anything more.

Even with its low budget, that didn’t consign The Curse of Lilith Ratchet to certain doom. The problems begin early when it comes to establishing its universe and its rules in a way that feels consistent and credible. The script requires plenty of sloppy exposition and a questionable structure of this information. We should know the rules of Lilith Ratchet early to play along. It isn’t until over an hour into the movie where the characters even piece things together. There are also scenes that have no need to exist or their placement is questionable. Do we need a scene where the characters chat with a local shop owner who warns them about his open “not for sale” display? If we cut that scene, then it presents the characters as more devious when they explain how they obtained the shrunken head. When we do get the Lilith Ratchet back-story, we get it twice, first when Hunter is presented with the shrunken head and then second on his paranormal radio broadcast. Why not condense this into one experience? Why not even open with the back-story, then pull back and reveal him on his radio broadcast, and then from there have the characters on his doorstep with the shrunken head, knowing from the broadcast he was a fan? That’s a cleaner structure. There is a weird plurality of scenes of people consoling Dylan (Roger Conners), but it’s always someone informing you after-the-fact about relationships. I didn’t know he was best friends with a murder victim, and now everyone on the street wants to console him like he’s an unofficial mayor of the city. It’s storytelling that’s trying to fill you in on significance after it matters. If you’re going to be late giving us information to understand the characters’ emotional states, don’t bother.

As a horror movie, there are too many moments that are expected. It feels like we’re running through the motions to include certain moments because they’re expected. The opening prologue introduces a threat and some mild gore, but the massacre of this sorority doesn’t have any larger ramifications for the entire story. We see some of the dead girls, which means that Lilith Ratchet can indeed take the form of the dead, but they don’t act too suspiciously. It’s simply a quick visual cue for the audience not to trust these onscreen women. If she can take this form, I wish she had done it more often, especially as people started getting dispatched. The opening also has what might be the funniest moment in the entire film. One of our sorority girls sees the evil spirit, runs upstairs, hides in her bathroom without locking the door, climbs into the shower as a meager form of protection, and this is even funnier because the shower is a clear glass door. I don’t know what she was expecting hiding behind a completely transparent cover in an accessible room. Are we supposed to ridicule this person? I don’t get the sense anything is done for laughs. Likewise, there’s a preponderance of jump scares in place of cleverly designed set pieces of terror. There’s nothing tailored toward Lilith Racthet’s personal history to make it her feel more than a generic haunt. 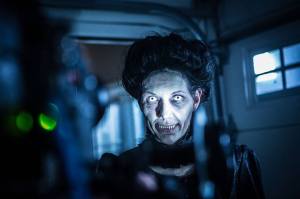 The real star of the movie is Lilith Ratchet and the actress behind the spirit, Crissy Kolarik (Mother Krampus 2). It’s rare for a horror movie to not just create a spooky creature but to even create an affecting silhouette, something easily identified and quickly felt. Lilith Ratchet is a great looking creation. She’s in a flowing Gothic gown, her clawed fingernails stretched at her sides, her Victorian era hairstyle and pale face. It’s a creepy image and Kolarik has a really strong sense of poise and presence as she patiently stalks the sets, enough that I was reminded of The Nun, another immediately creepy specter with a clearly identifiable silhouette. The backlit moments that highlight Lilith’s shape also have an unsettling impact. I wish that this evil spirit had a more interesting story to utilize this actress and setup. While the movie never calls for her to do anything terrible different, Kolarik excels at being the big bad boo and glaring menacingly.

Under its DVD release title, American Poltergeist: The Curse of Lilith Ratchet is a bit misleading considering she’s not a poltergeist. Or a demon. Or much of a ghost really. She’s kind of a walking idea, a version of the Bloody Mary urban legend. This lack of clarity and personal alignment is symptomatic of the movie as a whole. It’s certainly not a bad looking movie for its reported $15,000 budget. It has professional lighting that establishes a mood and solid makeup and gore effects, and even the score can have its draw. The acting is acceptable even with characters absent goals, dimension, or general points of interest. I have seen far worse movies with far bigger budgets. What I’m getting at is that The Curse of Lilith Ratchet had effective and appealing technical merits and a capable cast that could convey dismay and confusion. It had a starting foundation that could have delivered had they been given a good and interesting story. Alas, the screenplay feels too unfocused, sloppy, overcrowded, and lacking in direction and escalation and personal stakes beyond the obvious. We’re talking about stuff like an extended sequence of hot potato with a shrunken head for a radio show. If you’re not going to make smartly designed scary sequences, then perhaps try your hand at making a campy, gory, silly, knowing movie. The tongue-in-cheek version of this movie could have been a blast. The Curse of Lilith Ratchet is a middling horror movie that just comes and goes, leaving little impression other than a lingering sense that somehow it should have been better.