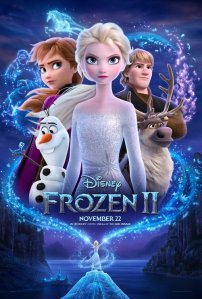 While it’s become somewhat fashionable to call Frozen overrated, I still think it’s a great movie with an even better soundtrack, songs that I can instantly think of and hear them immediately in my head. I figured Disney would be very careful about a Frozen sequel out of a tactic understanding that they didn’t want to damage their brand. It was six years ago so I figured they hatched a sequel worthy of the big screen and legacy of their billion-dollar hit, but what I received with Frozen II was more akin to a direct-to-DVD sequel that is meant to jump start an afternoon cartoon series called Elsa’s Magical Friends. Prepare for mediocrity, folks, and start dialing back those expectations. The story revolves around Elsa (voiced by Idina Menzel) discovering her past, traveling to a magical land, meeting magical tribes of creatures, and helping to unite a divided people. The sloppiness of the storytelling is staggering. The plot is filled with exposition and the world building is clunky and unclear, designed more to move things along and set up cute creatures ready for holiday merchandise. The characters arcs are nebulous, in the case of Elsa considering she’s never longed to discover a past, and resoundingly lightweight in the case of everyone else; Kristoff (Jonathan Groff) is worried about having the perfect proposal (yawn), and Anna (Kristen Bell) wants to support her sister but also doesn’t want her to march off into danger needlessly (yeah, and…?). Olaf (Josh Gad), the magic snowman, remarks about the nature of change, but by the very end of the movie nothing has really changed, and that’s even after a gigantic potential sacrifice that Anna makes by her lonesome. I felt some emotional pull for the characters but that was because of the holdover of my feelings for them and less because of the situations they found themselves in with this sequel. And let’s get to the songs, which are shockingly forgettable. I was forgetting them even in the middle of them being performed. There’s no “Let It Go,” but there’s also nothing as low as the troll song, but what we’re left with are milquetoast ballads and tunes low on hum-worthy melodies. The best song might actually be a jokey power ballad along the lines of Bryan Adams where Kristoff sings his woes. That’s right, a Kristoff song is maybe the best track in this movie. That feels like a pretty big indication something went wrong. It felt like the kind of quality you’d expect from a direct-to-DVD sequel’s array of new songs. Frozen II feels so bizarrely perfunctory and routine, absent a cohesive theme holding everything together and providing a firm landscape to direct the characters, and going through the motions. It’s not a story that adds greater depth to this world. If you’re expecting something along the lines of quality from the first Frozen, it’s better to simply let those feelings go. And what’s the deal with Elsa’s neck on the poster? It’s far far too long.