A Beautiful Day in the Neighborhood (2019) 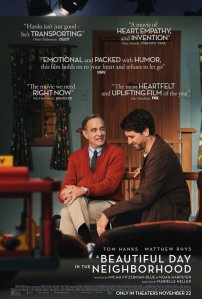 As I was watching the sweetly good-natured but somewhat superficial 2018 documentary Won’t You Be My Neighbor?, I was left wondering if there could be a big screen story on minister-turned-children’s TV host Fred Rogers, a.k.a. “Mr. Rogers.” Was there enough material to open up this kind, affirming, gentle man into a three-dimensional character worthy of a deep dive? I’m still unsure after watching A Beautiful Day in the Neighborhood with Tom Hanks as Rogers. The filmmakers made the conscious decision to construct a fictional narrative of family strife between a father (Chris Cooper) and his son, Lloyd (Matthew Rhys), a magazine writer. Fred Rogers begins as an assignment for Lloyd and becomes the change agent, pushing Lloyd, in the gentlest and most empathetic manner, to reflect on his anger over his father’s abandonment and to work through his feelings and potentially forgive the old man. Like the PBS star, the movie is sweet and optimistic and gentle and just a little bit boring. The film follows a pretty strict formula of catharsis, and while it works it doesn’t make A Beautiful Day in the Neighborhood feel more than a TV-movie plot attached to a malnourished Fred Rogers biopic. I understand the storytelling difficulties of trying to make a soft-spoken man who isn’t given to long-winded speeches a starring role, so it makes sense that his presence would be a catalyst for a family in crisis, basically serving as therapist. Hanks is fitting and affecting, and once again I feel like there are glimmers of a more complex man underneath the persona we’ll never be treated to in any big screen examination, like about his struggles raising his own children, his crisis of relevancy late in life. The majority of the movie is a father/son story that is well acted and pretty much fine, and “pretty much fine” is a perfect description of the film as a whole. It’s nothing you’ll regret seeing and it will generally be uplifting and sincere, but it’s basically a 108-minute greeting card.