If you’re writer/director Robert Eggers and just made a most delicious impression with your debut movie, 2016’s The Witch (or, stupidly, The VVitch), where do you go next? Apparently it was off the coast of Nova Scotia with Robert Pattinson, Willem Dafoe, and a sexy mermaid? The Lighthouse follows the story of two men, Thomas Wake (Dafoe) and Ephraim Winslow (Pattinson), as lighthouse keepers trapped during a torrential New England storm in the 1890s. This fraught relationship comes undone over the course of some very severe cabin fever. While The Lighthouse might not be as enjoyable as The Witch, nor the arthouse genre masterpiece some critics have been hailing, it is an exceptionally realized throwback with its own beguiling sense of peculiarity. They don’t really make them like this anymore, folks.

The Lighthouse feels exactly like somebody meticulously melded an episode of The Twilight Zone with an episode of Alfred Hitchcock Presents. The vision is so specific and so fine-tuned that it can be startling, like watching a high-wire act of an artist perform a feat and so well. Eggers is definitely a man with definite talent and here is a movie that serves as a strange, loving homage to an earlier age. The shooting style, camera equipment, lenses, and nearly 4:3 aspect ratio coalesce to make The Lighthouse feel like a forgotten curio of an older age. The very nature of the movie’s presentation adds to the enjoyment level of the two hours of madness. This is a highly impressive movie, first and foremost from its technical side. The black and white photography is rich and stunning, making elaborate and precise use of shadows and camera movement. You feel the grime and salt. Pattinson’s face is filmed with such heaviness, shadows draped over him, that he looks like he was carved from stone to resemble a modern-day Robert Mitchum. There are several moments that unveil themselves with startling meticulousness. There are several images that stick in my memory. There are moments of levity that had me snickering madly. Eggers has a terrific instinct when it comes to staging scenes and drawing out the suspense as well as the humor. Some scenes will cycle from horror to comedy and then back again, allowing the movie to continuously feel slippery in tone as well as effect. It’s such a handsomely mounted production that it’s easy to admire the dedication. The craft is remarkable. Eggers had a very exact style he was going for with his second film,and he commits fully to the process. Whatever you think of the lasting impression, the man achieved his vision to the bitter end. 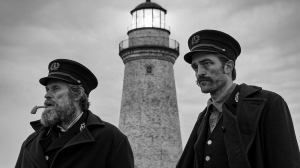 Being a two-hander, the entire movie is going to rest on the shoulders of our acting duo and what insights we can glean from them as they become combative and ultimately suspicious. There’s only one other credited actor for the entire film, Valeriia Karaman, as a lustful fantasy for Winslow, or maybe she’s not a fantasy? We’re stuck with two very capable thespians and they just dig into these meaty, hammy roles. The dialogue has a delightfully daffy out-of-time cadence and vernacular that adds authenticity as well as a sprinkle of approaching madness. Dafoe (Aquaman) is a delight as a soused old captain given to self-important and abrasive behavior. An insult over his cooking unleashes a ridiculous monologue where he lays out in great, poetic detail a curse, and like much in the movie, it goes from being funny to being serious to being outright impressive. It’s like watching actors get to play with Shakespeare, that’s how immensely pleasing it can be to listen to Dafoe and Pattinson deliver Eggers’ dialogue with great flourish. Pattinson (Good Time) has gotten a bad rap for being the Twilight pretty boy but he’s taken exciting chances on artistically daring and dangerous prospects (this is his SECOND 2019 indie thriller that prominently features his furious masturbation). Pattinson serves as our entry point into this secluded seaside shack, and it’s through him we watch the madness of the movie plant. He’s got a real fire he’s able to harness that makes him vulnerable, sympathetic, and dangerous. Should we root for Winslow? Being trapped alone with them never gets boring because of their characters, the revelation of secrets each man may or may not be embellishing, and their explosive confrontations.

This is also very funny movie. Eggers understands the thin line between madness and humor and uses this to his great advantage where the embrace of comedy enhances the overall feeling of WTF insanity. You’ll be forgiven for laughing but Eggers seems to invite it almost as a needed release. Much like Ari Aster did with Midsommar, the filmmaker is clearly playing with camp elements intentionally. It’s a tricky artistic maneuver to willingly invite camp and to make sure it doesn’t pervert the rest of the film and its ambitions, but I think Eggers pulls it off. There is literally an audible fart before the two main characters share a line of dialogue together. You’ll be surprised how much farting is actually in the movie (all added in post-production, the Internet trivia proudly crows, because I guess Dafoe didn’t want to go that far Method). There’s an exciting unpredictability to the movie even as it feels very much on a foreseeable collision course that you await. 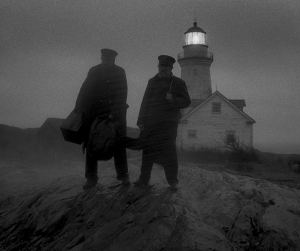 After all that artistic sturm und drang, I was left wondering what exactly there was to hold onto for clarity and substance. Firstly, the artistic exercise, dedication to a specific vision, and level of execution will likely be enough for a certain group of viewers, especially those titillated by old school horror peppered with David Lynch peculiarities. It’s a moody work of art with definite finesse but ultimately I don’t know how much there is to take away from it. The Lighthouse feels like a well-handled experiment that deserves your admiration but I don’t know what engagement exists beyond simply the experience and then the discussion it leads. There are plenty of movies that invite an active deconstruction and this interactive interpretation serves as a central selling point, but I was wondering what I should be thinking here. I don’t know if the movie is adopting Winslow’s point of view and I shouldn’t trust what I see onscreen, or I shouldn’t trust Thomas, or I shouldn’t trust either, or whether the movie was adopting either of their perspectives or neither. By the end, I don’t know what is supposed to be taken as legitimate, and this can work with plenty of movies but the majority doesn’t seem to operate on a dream-logic. It’s a dank, claustrophobic, paranoid thriller but it’s so dutiful to an older style of thriller that the eccentricities don’t take over and become the movie. It’s entirely a movie about men being stranded, going mad, and turning on one another, and that’s about it. There is a definite Promethean analogy with Winslow’s desire to “have the light” and the old man standing in his way (this is hit even harder in the very obvious, concluding image). If you cut out maybe 40 seconds of the movie it could have played on TV back in Hitchcock’s day and would fit.

It’s hard for me to articulate but The Lighthouse is an A-level execution of an idea that feels all too limited and small. It’s thrilling and accomplished and a fun movie to just get lost within and laugh at the screen when it goes overboard. I wouldn’t even mind taking another trip and getting lost in this sea-soaked curiosity. Maybe I’ll be able to impart more meaning, because while the technical craft and extraordinarily honed artistic vision shine through, the lasting power of the whole enterprise feels a bit too locked in place. It very much is a remnant of the past, a loving homage to old Hammer films and television anthologies and tales of men losing their minds when it comes to loneliness, desperation, and helplessness. There’s much to champion with The Lighthouse and I’ll assuredly be in line for whatever Eggers decides will be his next project (a quick search comes up with a tenth-century Viking revenge thriller starring Dafoe, Ana Taylor-Joy, two Skarsgards, and Nicole Kidman). When Eggers commits to a story and style, he commits completely and the results can be breath-taking. I hope he aims for more than A-level execution with his next movie and goes for an A-level story experience to match. Still, The Lighthouse is a fascinating and delightfully weird experience that will enchant and baffle.