Jackie (Natalie Portman) is still reeling from the loss of her husband, President Kennedy (Caspar Phillipson). In the weeks that followed the assassination in 1963, her life was a whirlwind of change. She was leaving the White House while another administration took control of her husband’s office and agenda. She was leaving a life of glamour and privilege and it all came to a halt. Bobby Kennedy (Peter Sarsgaard) is worried about the Kennedy policies getting lost as well as his own potential presidential prospects. Lyndon Johnson (John Carrol Lynch) is worried about asserting his own control. While trying to work through her grief, Jackie must protect her husband’s legacy among all the well-wishers, political vultures, and craven opportunists.

We’re left with an immersive, impressionistic look at America’s most famous first lady since it’s hard to distinguish the layers of performance from the woman herself. She was used to adopting the façade of what the public expected of her, how her husband’s friends looks at her with desire and dismissiveness, and the differences between her private life and her public persona. It’s a fascinating glimpse into the interior space of a famous woman that so many people think they know well because of her glamour and television appearances, but do they really? Her identity is in free fall. She gave up everything for this man and now he is gone and her cherished position is gone. It’s said each first lady leaves her stamp on the office, and now Ladybird Johnson is already itching to undo that stamp, erasing Jackie’s presence and supplanting it. Will these last few days define her and will they define her husband? While dealing with raw grief, Jackie also takes the position of being the first to protect her husband’s legacy. While planning the particulars of the funeral march and exact burial site, she’s really framing his place in the greater annuls of history, tragically cut short and questionably memorable. His life has been taken from her and now the only thing she can do is protect his place in history. The funeral details and conflicts they consign the new Johnson administration to are interesting, as is Jackie’s simmering disdain for the Johnsons, but it’s more than just placation; Jackie has an underrated knack for theatrical optics. The country is in mourning, just like its (former) first lady, and she offers a spectacle as an outlet. Some term it vanity and even Jackie admits that many aspects were for her, for her grief, for her rage at the world and her doubters, for her wounded soul searching for meaning. She wanted the American public to see her in mourning but she wanted just as much to see them in mourning too.

Eschewing the standard cradle-to-grave biopic, as well the noveau approach of using one clarifying moment to better examine and sum up the person (see: Selma, Steve Jobs), Noah Oppenheim’s script is a triptych, a hypnotic exploration that zips along non-linear but thematically-tethered memories. It’s a more interesting approach because we’re not locked into a linear progression of plot events, though the immediate aftermath and her interview with the Newsweek reporter (Billy Crudup) serve as the directional compass. It also provides a clever conceit for meta-textual levels. We have scenes that lay as direct conflict with the public Jackie and the private Jackie, and we have scenes that lay into the different levels of performance, from her show model tour of the White House furnishings and fixings to putting on the brave face to speak to her children. Director Pablo Larraine (No, Neruda) shoots the movie in a style reminiscent of its 1960s time period, with a film stock that blends the difference between documentary and recreation, further adding another stylistic level to the proceedings. The various threads of connectivity are so much more interesting to dissect with this storytelling approach and it makes the movie a much deeper and more contemplative experience to unpack.

There’s a scene in the middle of Jackie that stood out to me. During a night of drinking, Jackie puts on the record for the Broadway production of Camelot and wanders the large empty spaces of the people’s house. For my younger readers, the Kennedy administration was dubbed by many as “Camelot,” first coined by Jackie, out of a sense of its idealism, youth, and inspirational promise to change the world into a nobler place. It’s practically a mythical time and the real people get lost amidst the romantic spectacle. Nowadays, our presidents can often be the same mythical figures as the kings of old, figureheads whose humanity and details we iron out and soften as we eulogize and entomb them. The music echoes through the different chambers but there’s no one to hear it, no one to enjoy it, the vast emptiness communicating much of Jackie’s anguish. “There will be great presidents again but there will never be another Camelot,” she says. That moment is left as a passing memory, a picture of nostalgia that will only have its realism dampen in time as it becomes enshrined in American myth making. Amidst all her privilege and esteem, there is an existential sense of loss for Jackie and the nation as a whole into the turbulent 60s.

The other rich aspect is that we are watching a woman process her grief in real-time and it can often put a lump in your throat. I challenge anyone not to feel an outpouring of empathy when Jackie has to explain to her two very young children why daddy isn’t coming back from Dallas, having to explain something horrendous to those so innocent. In some scenes it feels like Jackie is numb to the world around her, focused on the little things as an escape from her horrible reality and its trauma. We do get a recreation of that fateful day in Dallas twice. The first is the immediate aftermath with Jackie bloodied and protected by the Secret Service, keeping her at a distance from us too in the audience. The next is a closer view inside the car as we’re with Jackie when the awful event happens, and the sudden shock of gore is still a disturbing gut-punch no matter how much you anticipate the moment. We watch her crazed instincts trying to collect the pieces of her beautiful and broken husband, stressing she was trying to keep everything together, figuratively and literally. The scene plays out longer and it serves as an emotional climax to the film, a frank reminder that for everything people believe they know about this woman, at heart, for all her riches and fame and privilege, she is simply a human being trying to make sense of death. It’s this final moment in the car that reminds us. 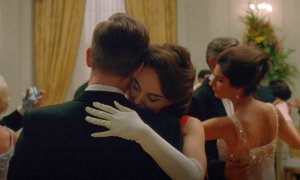 This is an acting showcase and Portman (Black Swan) excels, delivering the best female performance I’ve seen this year at the movies. It’s an Oscar bait dream role and she nails it. She goes beyond mere imitation though Portman does an excellent job of that. Thanks to critic/blogger Jeffrey Wells for this great quote about the imitable real-life Jackie from author Tom Wolfe’s novel, The Right Stuff: “She had a certain Southern smile, which she had perhaps picked up at Foxcroft School, in Virginia, and her quiet voice, which came through her teeth, as revealed by the smile. She barely moved her lower jaw when she talked. The words seemed to slip between her teeth like exceedingly small slippery pearls.” Portman stunned me early with her exquisite recreation of Jackie and then she stunned me moments later with the depth of emotion she was able to convey in the scene where she stares into the Air Force One mirror, dabbing her husband’s blood from her face as her eyes are swollen with tears. Lorraine favors plenty of exacting close-ups to watch the array of emotions play across her face. She has moments of strength, moments of pettiness, moments of heart-tugging lows and weakness, and Portman is always fascinating, holding your attention rapt as you study her study. It’s a mesmerizing performance and one that deserves to earn Portman her second gold statue.

Jackie is a movie that has stayed with me for days after I’ve seen it. The exceptional and empathetic work by Portman is the first thing I recall, and then the thematic and symbolic relevance of the storylines as they fold on top of one another, providing a hypnotic and immersive portrait of a very famous woman who sought and spurned the spotlight. As far as I’m concerned this is the definitive film presentation of Jackie and Portman’s searing performance is the dazzling standard that won’t be beat. You walk away having additional appreciation for this woman but also further curiosity. The movie doesn’t expressly state who she is as a human being, providing a range of personas, some that conflict with one another, and allows you to put it all together for your interpretation. It’s a bold gambit and a fitting gesture for a woman defined by others’ perceptions.