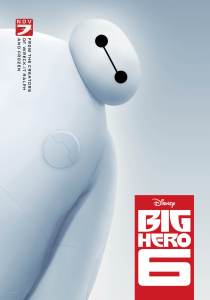 Disney’s first adaptation of a Marvel property, it’s essentially a superhero origin tale mixed in with the “boy and his robot” formula borrowed from The Iron Giant. The story is fairly predictable but charming and unafraid to deal with loss and grief. The real star, though, is the inflatable robot Betamax (voiced by Scott Adsit), whose unfailingly optimistic and helpful nature is a loveable addition to a genre plagued with doom and brooding. The action sequences are colorful and well developed and paced. It’s an agreeable pilot film for a new animated franchise, and the characters are likeable and fun while still having enough emotional resonance to make the hard choices of sacrifice hit you in the gut. It’s a welcome change of pace to have a character interested, first and foremost, in the mental health of others. You just want to hug Betamax (parents, your children will be begging for the toys). The plot does follow many similar plot beats of the superior Iron Giant but this film is still enjoyable enough on its own terms.