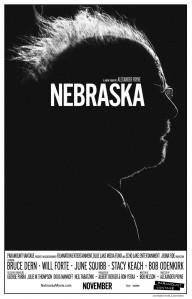 Nebraska is a slow burn, wryly-funny character study of understated proportions, highlighting Midwestern culture rarely given its big screen due. So, in essence, it’s an Alexander Payne movie.

Woody Grant (Bruce Dern) is an elderly man convinced he has won a million dollars and all he needs to do is travel to Lincoln, Nebraska to claim his loot. It’s one of those mass mailings really meant to get people to buy magazine subscriptions, but Woody will not be stopped, sneaking out to walk all the way to Nebraska from his home in Billings, Montana. David (Will Forte) is in a rut himself. He’s recently been dumped, his job is going nowhere, and his father refuses to accept his million dollars isn’t real. There’s a question of how lucid Woody is, and so to placate his old man, David decides to drive his father to pick up his winnings, to humor him before his mind may be gone for good. 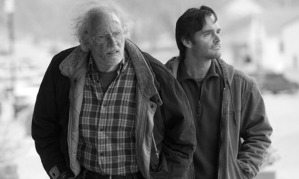 Despite the overtly sitcom machinations of the inciting incident, which even the characters dismiss, the film is really a drama about the relationship between a father and son and the culmination of our life choices. Woody and David are not close by any conventional means but over the course of their road trip, David begins to see his father in a different light; the old wounds are not forgotten, but David is learning about who his father is through others. He’s been so mad at his father for so long that it was the only identity he had for the man. Now in his deteriorating mental state and physical fragility, his father has a sense of vulnerability that brings about decidedly mixed emotions. In his fragile state, is he the same man or at least the same man David remembers? Then there are all the family revelations springing out from the situation. With a genuine millionaire in their midst, the family is coming out of the woodwork clamoring for their own pieces for all the unpaid assistance they’ve given Woody over the years. Initially, it makes Woody look like he’s been stuck trying to find his footing his whole life, as we learn about the lingering post-traumatic stress effects from his war service. Was he lazy, undiagnosed PTSD, or, as another character surmises, too ashamed to say no when others asked for help, and so he was taken advantage of in the guise of assistance from unscrupulous friends and family. The question remains who is Woody?

This is one of those observational slice-of-life films, and your enjoyment of it will depend on your threshold for the taciturn types. These are the strong silent types who keep most of their feelings to themselves. There’s a very funny sequence where Woody and his aged brothers have gathered around a TV, and to listen to the dry mostly car-related conversation bounce back and forth like a dead, floating wiffle ball, is a great comic moment but also a nice insight into an older generation and their communication. Given the perspective of the film, it’s hard to deduce whether the plainspoken people are being satirized or whether it’s a loving send-up of a specific culture. With Payne’s involvement, I lean more on the affectionate tweaking rather than a mean-spirited ridiculing of small town folk and their small town ways. There are funny situations, like David and Ross teaming up for some misplaced justice, and there are characters more broadly drawn for laughs, particularly Woody’s wife (June Squibb), but the overall interaction of the characters, their speaking vernacular, and how they viewed themselves, that is what made me laugh the most and appreciate the script. You feel like you’re dropping in on these people’s lives; every character feels like they could be a real person, not a stereotype. And boy does money really bring out the worst in people.

With Woody and his son visiting his old haunts, the movie inevitably becomes a reflection of a man taking stock of his life, regarding the choices he made and did not make. The pit stop in town opens up the character and David learns far more about his father, with old girlfriends, old business partners, and old rivals. What I appreciated further is that Nebraska doesn’t try and soften Woody; he’s not going to be some old curmudgeon who over the course of 90 minutes has his icy heart thaw and comes to realize the errors of his ways. Nope. Our views on the old man may soften when we get a fuller picture of who he is ad the life he’s lead, but the man himself is the same. He’s readily belittled, insulted, looked down upon, even by his own family members, especially his sassy wife. It’s easy for him to retreat into alcohol and wonder what if. As the family picture broadens and becomes more clear, the film approaches simply yet touching revelations about the family and the nature of legacy. There’s a father/son examination, but there’s also the discussion of what to do when your parents become too ill to take care of themselves. It’s not exactly The Savages, but there’s a circling sense of burdensome decision-making that provides an extra level of pathos to the sitcom setup. By the end, Nebraska squeezes out some earned sentiment without losing its edge or sense of identity. There’s a lot more going on then just some send-up of rubes. 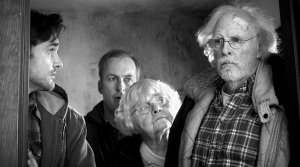 People have been raving about Dern (TV’s Big Love, Django Unchained) ever since the film’s Cannes premier, where the man earned top acting honors. The man deserves every positive words penned. He’s simply fantastic. The character vacillates between outward hostility, spacing out, and general Midwestern emotional reserve, and Dern is able to sell you on every emotional beat without breaking character. He’s unrepentant and demands to be taken for who he is, and his matter-of-fact bluntness has a certain charm to it, like when he admits to David that he never had any plans for kids. He just liked to “screw” and their mother was a Catholic (“You do the math”). I even appreciate that Woody would use the term “screw,” which seems more appropriate. As a two-man show, it’s a shame that Forte (TV’s 30 Rock, The LEGO Movie) doesn’t exhibit the dramatic chops to keep up with his onscreen pop. It’s nice to see him attempt something so different but his limitations are too evident; it’s just another gear that’s not present. At no point would I call Forte’s performance bad but he’s just unable to keep up. Squibb (About Schmidt, Meet Joe Black) is a hoot though the character seems to be permanently stuck in “wacky” mode. She’ll crack you up with her unrestrained commentary, but you may wonder if there’s any more to this character than saying outrageous, curt comments.

This was the last Best Picture nominee I’d failed to catch up with, and while it’s entertaining, funny, and unexpectedly touching thanks to terrific acting and a sharp script, but it also might be the weakest Alexander Payne film yet. This is the first film that the Oscar-winning director hasn’t written himself. Bob Nelson’s screenplay may never have even been glanced over by Payne had it not been for the state of its title (Payne’s films general take place in Omaha). It’s got Payne’s stamp, as would any film he directs, but it also feels like it’s missing something ephemeral, not to get too pretentious. This is a quality study of a cracked group of characters that, upon further review, aren’t as cracked as we may think. They’re just flawed people trying to get along as best they can. Even amidst the snide and antagonistic conversations, there’s gentleness here about the value of family that resonates above the din of the shouting. By film’s end, what started as a cockeyed sitcom transforms into a film that has more meaning and emotion, never betraying its guarded sense of self. When I say the weakest Payne film, this is not an insult but merely an observation. Even the weakest Alexander Payne film is going to be so much better than just about everything out there.