The 2010 Clash of the Titans made some sizable sums of money but it really became famous for one reason – the beginning of the 3D fleecing and the public’s souring on what was supposed to “save the movie going experience.” Clash was converted to 3D in post-production, and its lack of foresight and rushed conversion showed. After the high of Avatar, it only took approximately three months for the public to feel ripped off by 3D. Certain Hollywood bigwigs are concerned that bad 3D conversions will kill the golden goose, and it is having an effect. The percentage of movie audiences seeing big releases in 3D has slipped steadily from 2010. Whether it is the added cost or the underwhelming conversion, movie audiences are warier of the third dimension. And it was Clash of the Titans that destroyed a nation’s innocence. Two years later, the sequel is out and, surprise surprise, you also have the ability to see it in 3D. Either way, this movie will cause you a headache.

In the wake of Perseus successful slaying of the Kraken, he is now a widower with a young son, living their lives quietly, trying to avoid the daring heroics of his earlier life. Fat chance, kid. The gods are at war, particularly Hades (Ralph Fiennes) and Aries (Edgar Ramierez) versus Olympian head honcho Zeus (Liam Neeson), Perseus’ absentee father. The titan Kronos will be unleashed from his prison, Tartarus, and this powerful behemoth will lay waste to the armies of mankind. The gods have grown weak due to mankind’s dwindling faith, and as such they cannot conquer Kronos without the help of man. It’s up to Persues, Queen Andromeda (Rosamund Pike), and Poseidon’s demigod son a (Toby Kebbell) to track down the right magic artifacts to take down Kronos. 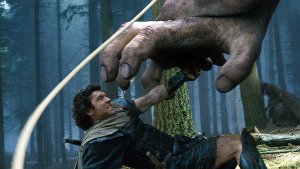 Once again we have a threadbare story that involves running from one location to another to find a clue that leads to the next location; the plot is just a series of magic-item gathering missions, much like a video game. Greek mythology made regular use of magic weapons to slay great monsters, but the myths at least gave their audience heroes worth fighting for. Worthington’s scowling rendition of Perseus is a bore, and giving him a son doesn’t help much. Just because the guy keeps insisting he has someone to protect doesn’t fill his void of characterization. He’s so free of charisma, so gruff and without any defining personality, that you wish he could find some magic shortcut to find his dumb magic items faster. The whole setup with our villain is also vague, beyond the very specialty of the god in question. And then there’s the whole concept of the gods dying, which was also featured in last fall’s glorious-to-look-at-but-empty-on-the-inside Immortals, another cinematic tussle with the titans. What’s the point of being a god anymore if the defining quality, immortality, can be ripped away? I suppose the screenwriters wanted to raise the stakes when Zeus and other gods enter the fray, dangling the threat that they too could perish. “We may not have weapons, but we’ll fight how long we can,” Zeus declares with modesty, and then he proceeds to zap enemies with lightning bolts. I don’t think a club is going to outrank a giant projectile of electricity. Realistically, I think the whole death-of-the-gods angle, which cold have brought some real somber and existential weight to the film, was just a setup to allow the producers to recast future sequels with less costly actors (goodbye, Neeson and Fiennes; they’ll be no more Kraken-releasing for either of you).

Director Jonathan Liebesman (Battle: Los Angeles) isn’t going to wow anybody with his addition to cinema, but he can put together a serviceable sequence of action. My favorite sequence in the entire film is when Perseus and crew enter the underground maze of Tartarus. The stone walls are constantly shifting around and the characters are zooming all around the room. It reminded me of the moving staircases in the Harry Potter world or think of it as the real prequel to Cube. And yet, even this nice sequence is limited because Liebesman and the screenwriters don’t take full advantage of their situation. We have a constantly shifting three-dimensional maze, and nobody gets lost at all? And the heroes, after discarding the map, easily find their way to the other side? What kind of design flaw is that? Liebesman prefers a lot of handheld camerawork and low angles, which can be jarring at times. Worse, the action favors a visceral chaos rather than steady development. There are plenty of people dying, columns exploding, fireballs tossing, but little of it adds up to much. It’s all disparate shots, like every character is in a separate movie. Such a shame because the special effects are rather good. If you’re going to spend this kind of money on a Greek mythology spectacle, at least make us care beyond a “fire pretty” level of tepid enjoyment.

The movie is in some breech of false advertisement since the title clearly states a plurality of titans, but by my modest account we only really have one titan to deal with, the giant lava beast Kronos (do the smaller creatures and Cyclops count as titans? I doubt this). Now we all love how fire looks, though some love it a bit too much. And lava itself has long been a childhood adversary. Who amongst us has never pretended the floor was once lava and but a handful of couch cushions were the only stepping-stones to safety? It’s hard to get an exact feel for how massive Kronos is considering he emerges from a mountaintop and seems to extend even higher into the sky. It’s intended to be a threatening and horrifying sight, but I kept thinking of a Marine ad from the 1990s where prospective recruits displayed their mettle by combating giant lava creatures (“Marines: Keeping the U.S. safe from lava men since 1916”). Instead of being awed by Kronos, I started picking apart the logistics of being a lava man. I suppose when you’re a god, or a titan for that matter, you don’t have to really eat or drink or do the things we mortals must for sustenance. But how does a lava creature work when part of his fiery M.O. is how drippy and malleable he can become? Perseus flies into the mouth of the lava beast but why does a beast, which needs no food or drinks, even needs a mouth? It’s not like this guy is speaking beyond a ground-shaking mumble. The entire face is almost superfluous. It’s not like a lava creature has eyes or a working circulatory system. Now I could apply these same annoying ticky-tack questions to any monster or mythological creature. The reason I did this is because the monster of monsters is no more intimidating, or satisfying, as the array of giant monsters that Godzilla would fight (or for you youngins – the Power Rangers). When your ultimate bad guy, and lone titan, can just as easily be blown up in the same manner as the Death Star, then we have a problem.

There’s a certain level of entertainment watching dignified actors in something so inherently campy. Neeson (The Grey) and Fiennes (Harry Potter and the Deathly Hallows: Part Two) are a long way from their Shindler’s List collaboration. The two men lend a level of gravitas to a movie that is leagues below their talents. Perseus proves to be such a dull demigod, that I wish the entire movie had followed the warring gods instead. That approach would have been much more interesting considering that they must confront mortality. Worthington (Avatar) still has a notable screen presence in the realm of action cinema, but his constant scowling is just getting tiresome. Hollywood, give this man something to do other than scowl and he may surprise you, like in The Debt. Pike (Doom) is unconvincing as a warrior princess, and her forced romance with Persues could not be more contrived (did somebody say, rebound?). The best actor in the movie is Bill Nighy (Underworld) who shows up as a daffy version of Hephaestus, the god of metallurgy and blacksmiths. Nighy understands how completely cheesy the whole getup really is and delivers a performance on the comic wavelength that the entire movie should have held.

While not nearly as humorless and joyless as the 2010 edition, Wrath is still a fairly block-headed romp through the noisiest parts of Greek mythology. After two movies with “titans” in the title, it’s somewhat remarkable that we only witness one single titan in the entire combined 245 minutes. It’s all CGI sound and fury with little cohesion to make anything feel important, despite huge mythological creatures demolishing cities. From an action standpoint, Wrath packs enough serviceable, escapist sights for the eyes to please diehards of Greek mythology and genre fans with low expectations. I wish there was a more compelling reason to run through all this stuff than big monsters needing to be killed; this hero’s quest needs more motivation or at least a grander sense of awe. The demise of the gods due to mankind’s mounting religious doubt seems like a juicy subject that could have opened these characters up. But then the theological discussions would get in the way of people hitting made-up CGI monsters. If you like your cheese feta, then Wrath of the Titans will provide enough wrath for your bucks, though found lacking in titans.