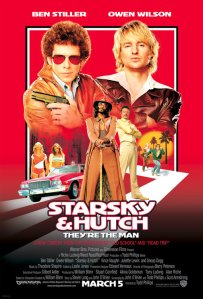 The big screen adaptation of yet another 1970s television show has about one joke in it  that the 70s were funny. So after scene after scene of people with funny hair, in funny clothes, and talking funny, Starsky and Hutch doesn’t so much coast as it skids to a flat, lifeless halt. Ben Stiller and Owen Wilson are an amiable duo and Vince Vaughn makes a credible cocaine creep, but director Todd Phillips (Road Trip) is left to unsuccessfully hammer his film with sight gags. Scenes and jokes will stretch on much longer than their recommended shelf life. Will Ferrell makes a welcomed cameo to give the film its only moment of juice. Snoop is wasted. You may laugh at all this but the Beastie Boys did it better with their “Sabotage” video  and that was ten friggin’ years ago.