← Pirates of the Caribbean: The Curse of the Black Pearl (2003)
The League of Extraordinary Gentlemen (2003) → 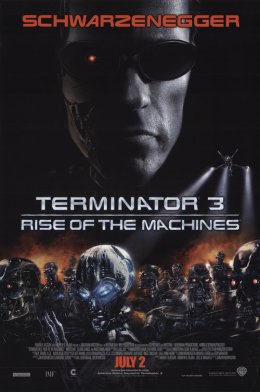 Arnold is indeed back and it appears that the 55-year-old action star and seven-time Mr. Olympia has saved our summer with the refreshingly retro retread, Terminator 3: Rise of the Machines. Twelve years have passed since the ending of Terminator 2. John Conner (Nick Stahl, replacing Edward Furlong) battles paranoia that at any second the machines of the future could send yet another android assassin back in time (And hes right, because if I was a machine and interested in proficiency, I would just keep doing this every year and eventually one would get it right). So because of these fears, the future hero of the human race is living his life right now like a drifter. He has no phones, no paper trails, and works from place to place never getting too comfortable.

John acting like a bum actually works. The machines cannot find him so they send a slinky new model, the T-X (Kristanna Loken), back in time to off his eventual lieutenants. This new version of the Terminator has the same silvery shape-shifting finish of Robert Patricks T-1000 (as well as the vacant emotionless staring) but now can turn her limbs into an arsenal of weapons at no extra cost. T-X, or Terminatirx, even appears in the window display of a posh clothing store. She appears alongside other manikins and struts her naked stuff along the night streets. So the killing machine of T3 is a blonde woman in red leather so tight it could have been painted on. She looks to be 115 lbs. soaking wet and made of metal. Nevertheless, the T-X is a suitable villain.

One of the names on the T-X list is Kate Brewster (Claire Danes), a vet with a dad in very secretive military projects. Which projects? Well only the creation and operation of sentient computer program SKYNET. Kate meets up with John at her vet office. They also meet the T-X, though why this killing machine would check the vet office and not Kates home is an oddity. But wait, another Terminator (Schwarzenegger) is sent back in time to protect the Conner clan for the third time (It’s becoming so familiar that the Conner family might as well have a T-100 stocking on their fireplace for Christmas). And like that Arnold rescues Kate and John from the evil robotic runway model and the chase is on. Meanwhile a computer virus is crippling the nations electronics and the military is pushing Kates father into making SKYNET operational. But to do so would give full control over the nation’s nuclear instruments to a machine. Can you see some things brewing on the horizon?

T3 is basically a retread of the story of T2 with Arnold’s obsolete model trying to save John on the run from a faster and deadlier Terminator. And you know what? So what I say. T2 was an incredible film brimming with great action sequences beautifully captured. So what better action film to emulate than quite possibly the best action film ever? And T3 fills in quite well. It is so marvelously refreshing to see an action film that doesn’t involve wires, kung-fu, and extensively obvious CGI. CGI should be used to enhance an action sequence, but when it becomes the sole reason an action sequence exists its harder to be drawn in. So when I see Arnold and the T-X rumble in a bathroom, knocking heads through doors and broken porcelain, it’s a total blast because of the sense of realism.

I think part of me would have had a slightly different reaction to T3 if I had not seen the humorless pretension of The Matrix: Reloaded and  Hulk. And unlike the earlier summer fare, T3 is an action movie that -are you listening Ang Lee?- ENTERTAINS the audience without boring them. Since when did we enter some parallel realm where our action films were trying to deconstruct the works of Nietzsche and use words like “concordantly” and “ergo”? Where was the turning point when the action fell out of the action film? These statements are not to say that action films would be better brainless (see The Mummy films, go on) but they would certainly be better if they had some humor and a lack of heady posturing. And for all of these reasons, and more, T3 is a solid action film, the kind we need to remind us what action films are and the fun they can bring. Did anyone, and I mean ANYONE have any fun with Hulk? I think a trip to the dentist would have been more exhilarating. Especially if he gassed you and touched your nipples like mine did. This is pure speculation though. 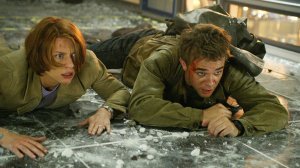 The Terminator franchise took a hit with departing director, and all around King of the World, James Cameron (the only director this franchise has ever known) and stars Linda Hamilton and Furlong opting out. Stahl and Danes are great choices and provide credible weight to their roles and suitable heroics. It’s personally wonderful to see Danes growing up into a confidant and lovely adult actress. I swear she looks older and more mature in this than The Hours even though that art crap was filmed later. Stahl seems to have a habit of getting killed in his films (In the Bedroom, Bully), so that might keep a few more film savvy people on their guard.

The biggest addition is from director Jonathon Mostow (Breakdown, U-571). One of the things Mostow does so effectively is play up humor like no previous Terminator film. The naked entrance of Arnold is a great example of Mostow acknowledging the iconic nature of the films. Mostow also stages incredible action scenes. Thats good too.

What does it say that Arnold is at his best when acting like a machine? I didn’t realize until seeing T3 how welcome it is to watch Arnold strut around in his familiar leather jacket and sunglasses. We might not have known we could use another Terminator flick but while you’ll watching you may think, ”Man it’s been too long, welcome back.” T3 isn’t going to be the benchmark of action like its predecessor is, but the film is a good time.

← Pirates of the Caribbean: The Curse of the Black Pearl (2003)
The League of Extraordinary Gentlemen (2003) →