There’s a rule of thumb I’ve come to find in Hollywood, something so certain you could set your watch to it. No, not the Emmys nominating Frasier for everything. I’m talking about man-owl Larry King, who seems to dabble in the land of film reviews. Kindly readers beware, if you see an ad for a film and it has Larry King’s salivating blurb in it, run away. Run away like the plague, like Pamplona. Just run. The only films I can remember off hand (though this theory has come true every time) are 15 Minutes and Wind Talkers. And now there is the horrifically titled sub-sub movie K-19: The Widowmaker.

K-19 should not be confused with K-9, the Jim Belushi teams up with a dog to fight crime film. No this one takes place in the early 60s in the thicket of the Cold War. An opening title sequence tells us Russia has enough nuclear weapons to blow up the world two times, but the United States has enough to blow up the world six times over. Whoo! U-S-A! The maker of widows is itself a docked submarine in the Russian navy in preparation for combat. Before it even leaves the shore it is said to be cursed, having five men die already from its widow maker-y hands. Liam Neeson is the captain of K-19 and well respected and beloved by his crew. However, Neeson is willing to put the lives of his men ahead of the agenda of the state, so the Communist government places Harrison Ford on the sub and gives him the reigns of command. Ford is a rigorous taskmaster who puts his men through countless drills and does not exactly see eye-to-eye with the more empathetic Neeson. 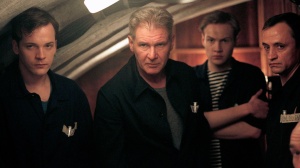 The story’s real turn comes about midway in, when after successfully launching a test missile above the arctic ice the nuclear core of the sub springs a leak. If something is not done to slow down the heating core the men could be vaporized in a mushroom cloud. Except that patrolling the waters nearby is a Unites States destroyer and thus would be destroyed as well, surely igniting the start of World War III. Crew members take shifts to enter the radioactive filled core area to try and do what they can. The situation gets even direr when the men come out looking like something from a George Romero film.

K-19‘s biggest fault is fictionalizing what would have been an interesting hour block on The History Channel. The Neeson and Ford characters feel like two sides of a debate, not exactly characters. The whole movie has been Americanized with heroic proportions. Instead of compelling drama were left adrift with what the studio wants as a summer movie with material that should no way be associated with it. I mean, the horribly dishonest marketing campaign actually has a crew member shout ”Torpedo headed straight for us!” then shows a torpedo surging ahead. There was never a torpedo in the entire movie or a scene where they were being attacked! Somewhere in this ho-hum story is an exciting tale of the courage these men were forced into as well as the strain of not being able to tell their friends or family about anything that happened.

Submarine movies have so many limitations to them thats its hard to make a unique one anymore. Everyone knows there’ll be a point where they go beyond THE RED AREA with the needle and hear the hull ache and creak. Everyone knows they’ll have to stop an onslaught of water leaking. Everyone knows that if you talk about writing a letter to your girlfriend at home in case you die well, the fates have it in for you. Either you love seeing these things a million times in cramped space or you grow tired of the expectations.

Director Kathryn Bigalow (Strange Days) manages to give it the ole college try with the long camera movements inside and the close-ups of men glaring at one another. Although technically able, Bigalow doesn’t do anything to transcend the limitations she has to work with. And while she meets her mark as a director it is neither spectacular nor worthwhile.

Ford has a horrible Russian accent he likes to flirt around with through the film. I dont exactly know if people are supposed to like his character, being rigid and pragmatic at the expense of human life. Neeson, on the other hand, is quite capable and shines in his role. The rest of the crew alternates between Russian accents to even some Australian ones I heard.

K-19: The Widowmaker tells us that this story could not be told until the fall of communism, except at the end it shows a clip of the Berlin Wall coming down and the crew then gathering to finally remember their fallen comrades. Some people just don’t have their dates right, and some people just don’t know how to take an interesting unknown slice of history and tell it well. Damn you Larry King.