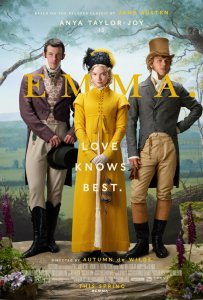 If you’re going to see a Jane Austen movie, chances are you already know what you’re signing up for. This new edition of Emma. (with extra punctuation at no charge) feels like a slightly more arch version, given a dose of the stilted whimsy of Wes Anderson. It’s only a dash but it’s definitely enough to set the movie apart from its more austere brethren, which will either make it a fresh and reinvigorating take on the material for an audience or a quirky misfire not playing to the strengths of its source material. I fall somewhere in the middle, as I’m not the biggest fan of Austen’s comedic voice but appreciate her point of view and the way she can drop you into these very specific, very rarefied world of class, privilege, and ignorance. The movie’s pacing is quite slack and the scene-to-scene urgency can seem a bit in doubt, which works with the more arch portrayal but also makes the movie feel very long and borderline tedious at parts. The technical asides of Emma. are impressive, with the glorious costuming and art direction transporting an audience back to that early pastoral 19th century time period. Ana Taylor-Joy (Glass) is a sprightly choice as the titular matchmaker and her best moments are when she embraces the extremes, whether it’s being haughty, awkward, contentious, or the occasional dose of slapstick. She navigates the complicated minefield of others affections, trying to stay above it, while finding herself drawn to the free-spirited Mr. Knightly (Johnny Flynn), who is the only reason this movie is rated PG thanks to a brief flash of rear nudity. Mia Goth (Suspiria) is winning as a demure women feeling the highs and lows of love thanks to Emma’s friendly intervention. It is such an amusing change of pace for Goth, often performing as a sexpot. The real standout are the comic actors doing the most with their supporting turns. Bill Nighy (Detective Pikachu) is highly amusing as the fussy hypochondriac father and Miranda Hart (Spy) is a welcomed presence as the oblivious, constantly nattering Miss Bates. It’s Emma’s show, though, and Taylor-Joy is an enjoyable lead surrounded by an exquisitely manufactured world of old. If you’re an Austen fan, Emma. is worth a watch. If you’re not, this won’t exactly be the movie that brings you over into the fanbase.