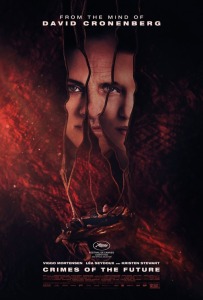 David Cronenberg returns to the thing David Cronenberg is best known for. It’s been twenty-plus years since the director has gone back to his body horror roots, and Crimes of the Future is certainly a gross gross movie. If that’s what you’re hoping for, then the discomfort and bizarre sexual analogies might be a selling point for you. For me, I just felt nauseated without an interesting core to keep my mind from drifting away. In the future, people have evolved (?) pain tolerance and infection rates, so our protagonist Saul (Viggo Mortsensen) turns surgery into public performance as his assistant/lover (Lea Seydoux) removes the vestigial organs his body produces. Kirsten Stewart’s antsy, horny character states that “surgery is the new sex,” and you’ll get plenty of parallels as we watch person after person get all squirmy while being cut open. My problem with the movie is that there isn’t anything beyond the shock value. The commentarry about body experimentation as a form of sensuality feels trite and more an opening for weird moments, like when Saul gets a zipper installed across his pelvis and his assistant decides to open it and somehow pleasure this… pouch? There’s a hint of an interesting movie here. Saul is being asked to serve as a confidential informant for the government hunting down an extremist group trying to kick-start evolution so that children will be able to consume plastics. That would have put our main character into a discovery role for this world that would have provided more than shock value. The movie begins, literally, with a child being suffocated by his mother, so that sets the tone as to where Cronenberg is headed. Crimes of the Future is essentially a geek show of a movie absent meaningful social/sexual commentary and interesting characters. It’s more a movie of pliable body parts.