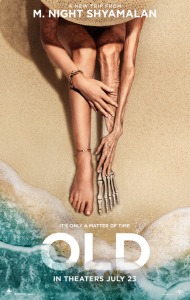 We follow a family on a vacation to a Caribbean resort. Guy (Gael Garcia Bernal) and Prisca (Vicky Krieps) are keeping secrets from their two children, six-year-old Trent (Nolan River) and eleven-year-old Maddox (Alexa Swinton). The parents are planning on separating and Prisca has a tumor, though benign for the time being. The hotel manager offers an exclusive secluded beach for those who would really enjoy this special experience. Guy, Prisca, and their kids join another family with a six-year-old daughter, a married couple, and an old lady with her dog, and they drive off into the jungle. Except this beach is not what it appears to be. There are strange artifacts of past visitors, and every time people try and pass back through the path to leave, they pass out. Also, everyone is aging rapidly, about one year for every 30 minutes elapsed. The children become adults, the elderly succumb first, and everyone worries they may not ever leave.

The premise is a grabber and takes the contained thriller conceit that Hollywood loves for its cheap cost and applies a supernatural sheen. It’s based upon a French graphic novel, Sandcastle by Pierre-Oscar Levy and Frederik Peeters, though Shyamalan has taken several creative liberties. It’s an intriguing idea of rapid aging being the real trap, and it forces many characters to confront their own fears of mortality and aging but also parental failures. Every parent likely thinks with some degree of regret about how quickly their little ones grow up. These adults have to watch their children rapidly age in only hours and not have any way to stop the relentless speed of time. The extra level of fear is produced by the fact that mentally the children are still where they began that morning. Even as Trent ages into the body of a teenager, he still has the mind of a six-year-old, and that is a horror unto itself. As his body rapidly changes, his parents are helpless to stop this terrifying jolt into adulthood and unable to shield their child from the terror of physical maturation but being trapped in the mindset of a child who cannot keep up with their mutating body. There are definite body horror and existential dread potential here, though Shyamalan veers too often into lesser schlocky thriller territory. For him, it’s more the mystery or the foiled escape attempts than actually dwelling on the emotional anxiety of the unique predicament. There’s enough born from this premise that it keeps you watching to the end, even as you might be questioning the actions of the characters, their ability to somehow miraculously guess the right answers as a group about what is happening, and the inconsistency of the rules about what can and cannot happen on this accursed beach.

There is one sequence that deserves its own detailed analysis for just how truly bizarre and avoidable it could have been, and to do so I will need to invoke the warning of spoilers for this paragraph. One of the other six-year-olds, Kara, gets a whole traumatic experience all her own that is morally and artistically questionable. Midway through the movie, Kara (Eliza Scanlan) and Trent (Alex Wolff) come back from a jaunt off screen together and they’re older and Kara is clearly pregnant. Given the rules that were established, that means that these six-year-old children experimented with their newly adult bodies to the point of fertilization (oh God, writing this makes me wince). I must reiterate that these characters are still six-years-old. Before you start realizing the gross implications, Kara is quickly entering labor and within seconds the baby is suddenly born and within seconds the baby just as suddenly dies silently from, what we’re told, was a lack of attention. What he hell, Shyamalan? Did you have to throw a dead baby into your movie to make us feel the visceral horror of the situation? It feels tacky and needlessly triggering for some moviegoers. This entire sequence doesn’t impact the plot in any meaningful way. Kara could have died in childbirth because of the circumstances of the beach. That would be tragic but matter. Just having her get suddenly pregnant and then suddenly the recipient of a deceased child seems needlessly cruel and misguided. And then, in the aftereffect of this trauma, Kara’s mom tearfully recounts her first love, a man she still thinks about to this day but doesn’t understand why. What does this have to do with anything? Re-read this entire scenario and let it sink in how truly uncomfortable and gross it comes across. It could have been avoided, it could have even been better applied to the characters and themes of the story, but it’s empty, callous shock value.

Another hindrance of Old is that the characters lack significant development and nobody ever talks like a recognizable human being. As Shyamalan has embraced being more and more an unabashedly genre filmmaker, he’s lost sight on how to write realistic people. You see this throughout 2008’s The Happening with its curious line readings and clunky, inauthentic dialogue being legendary and unintentionally hilarious (“You should be more interested in science, Jake. You know why? Because your face is perfect.”). I feel like Old is the most reminiscent of The Happening, the last time Shyamalan went for broke with ecological horror. The way these characters talk, it sounds like their dialogue was generated by an A.I. instead. “You have a beautiful voice. I can’t wait to hear it when you’re older,” Prisca says, which is a strange way for a parent to say, “I like what you have but wishing it was better.” She also has the line to her husband, “When you talk about the future, I don’t feel seen.” There’s also a running theme of characters just blurting out their occupations as introductions, “I’m a doctor,” followed by, “I’m a nurse,” like it’s career day on the beach. Frustratingly, all the characterization ends once the people wind up on this fated beach. Many of these characters are simply defined by their maladies and professions. This character has seizures. This character has a blood disorder. This character has a tumor. This character has MS. Noticing a pattern? You would expect that with such a unique and challenging conflict that it would better reveal these people, push them to make changes, especially as change is thrust upon them whether they like it or not. Imagine your uncle being cursed with rapid aging but all he does is still complain about his lousy neighbor. That limited tunnel vision is what Old struggles with. And one of the characters is a famous rapper named Mid-Sized Sedan but without a hint or irony or showbiz satire. Mid-Sized Sedan!

The way Shyamalan shoots this movie also greatly increases its camp appeal. This movie is coursing with energy and contrarianism. Shyamalan is often moving his camera in swooping pans and finding visual arrangements that can be frustrating and obtuse. Sometimes it works, like when we have the child characters with their backs to the camera and we’re anticipating how they have changed and what they might look like. Too often, it feels like Shyamalan trying to interject something more into a scene like he’s unsure that the dramatic tension of the writing is enough. There are scenes where what’s important almost seems incidental to the visual arrangement of the shot. Some of the sudden push-ins and arrangements made me laugh because it took me out of the moment by making the moment feel even more ridiculous. This heightened mood to the point of hilarity is the essence of camp and that’s why it feels like Shyamalan can’t help himself. If he’s trying to dig for something deeper and more profound, it’s not happening with his exaggerated and mannered stylistic choices being a distraction.

The ending, which I will not spoil, tries to do too much in clearing up the central mysteries. It feels overburdened to the point of self-parody, having characters pout expository explanations for all that came before and supplying motivation as to what was happening. Still, Shyamalan cannot keep things alone, and he keeps extending his conclusion with more and more false endings to complicate matters; the more he attempts to tidy up the less interesting the movie becomes. I would have been happy to accept no explanation whatsoever for why the beach behaves as it does. The best Twilight Zone episodes succeed from the mystery and development rather than the eventual explanation (“Oh, it was all a social experiment/nightmare/whatever”). Once you begin to pick apart the explanation with pesky questions, the illusion of its believability melts away. I had the same issue with 2019’s Us. The more Jordan Peele tried to find a way to explain his underground doppelganger plot, the more incredulous and sillier it became.

Old is a Shyamalan movie for all good and bad. It’s got a strong central premise and some memorable moments but those memorable moments are also both good and bad. Some of the moments have to be seen to be believed, and some of those moments are simply the odd choices that Shyamalan makes as a filmmaker as well as a screenwriter. It’s hard to say whether the movie’s weirdness will be appealing or revolting to the individual viewer. It feels like camp without intentionally going for camp. Rather, Shyamalan seems to be going for B-movie schlock whereas his older movies took B-movie premises and attempted to elevate them with themes, well-rounded characters, and moving conclusions (don’t forget the requisite twist endings). The worst sin a movie can commit is being boring, and Old is rarely that. I can’t say it’s good for the entire duration of its overextended 100 minutes but it does not prove boring.