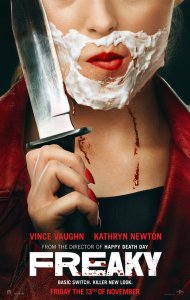 A body swap movie set in a slasher universe, Freaky is a fun and gory romp that still feels like it could have been even more entertaining with the possibility of its premise. A masked serial killer (Vince Vaughn) stabs a teenage girl (Kathryn Newton) with a magic Mayan knife and they swap places and must learn to cope in their new bodies and roles. The teen-in-adult body is wonderfully played by Vaughn, who seems to be really enjoying himself with a silly role that pushes him outside his smooth-talking leading man roles. He might be playing up the girlishness and higher-pitched voice but his energy level is high and provides plenty of entertainment with the absurdity. There are a few inspired moments developed from the crazy premise, like when Vaughn has a heart-to-heart with his/her mother at work, able to offer insight into the daughter she feels she is failing, and the mother becomes romantically intrigued by this mysterious man. There is a first kiss sequence in the backseat of a car that is so awkward but owns its outrageous quality. I wish the movie from co-writer/director Christopher Landon (Happy Death Day) made better use of its fruitful premise. There are so many more bizarre scenarios that could be gleaned here, especially if the masked serial killer had more of a personality. Clearly modeled after the silent stalkers like Michael Myers and Jason Voorhees, this makes the film feel too one-sided with ideas. Sure the teenage girl is now to be feared, dresses sharper, and kills her high school annoyances, but it doesn’t make for much of a creative cat-and-mouse game when it comes to outsmarting the original owner of this new body. I will also champion the gory kill scenes as above average in their conception and execution. It’s really over-the-top and memorable and I wish there had been even more wild splatter. Freaky is a decidedly fun movie from the Blumhouse assembly line but I can’t help wishing it was a little bit funnier, a little bit weirder, and little bit more imaginative. The parts were there to make this hilarious and brilliantly creative, and settling for chuckles and disposable entertainment feels like a nagging compromise.