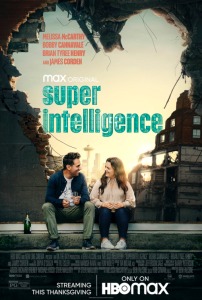 Given the sad and off-putting output from Melissa McCarthy and her husband Ben Falcone when they collaborate, it’s a small victory that Super Intelligence is only really super bland and forgettable. McCarthy stars as an everywoman picked by a highly intelligent A.I. to be the test subject for whether or not humanity should be saved or wiped out of existence. It sounds like an amusing premise but what it becomes is just a boring romantic comedy. The super A.I. (voiced by James Corden) becomes more or less a magic genie, and now our heroine has all her wishes granted. She has a huge new bank account, a new car, a new luxury condo, and all to impress the guy she let get away played by Bobby Canavale. That’s right, the super A.I., meant to test and judge mankind, is really just the world’s most advanced wingman and trying to get his human pal some love. As far as tests go this seems a bit weak. This mighty A.I. should be working against our protagonist, throwing increasing obstacles that push her out of her comfort zone, rather than just handing her everything and looking from afar with approval. The comedy is resolutely flat save for the inherent charms of McCarthy, who doesn’t seem challenged by anything in the movie. Much of the film is watching McCarthy talking into high angle CCTV cameras. Visually, it’s quite boring. Super Intelligence feels like an interesting idea that can’t be bothered to find anything interesting in execution. It’s standard rom-com fluff but the two characters aren’t even appealing together. I found Canavale’s character to be far more annoying than endearing. I’ve found that Falcone is a bad director for his wife. He encourages her worst onscreen habits and doesn’t have the presence or vision to be able to assert restraint or imagination. If Falcone is attached as director, you know you’re getting McCarthy doing her familiar shtick with little self-control. She’s still a highly appealing comedian, and an underrated dramatic actor, but the only super intelligence here are the people who avoid this film.