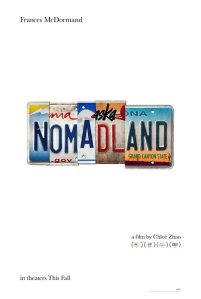 Part poetic elegy for an America of old, part sunset-tinted road trip, part condemnation of economic fragility, part character study of a lost soul who prefers wide open spaces, Nomadland is a small indie trying to say a lot but in as few words as possible. Consider writer/director Chloe Zhao’s film a mixture of the compassionate, languid colorful character-driven slice-of-life Linklater movies and the romantic, spiritual hymns to nature and the universe from Terrence Malick. It’s ultimately about Fern (Frances McDormand) as a woman who travels the American southwest from season to season in her van, going from one temporary job to another. The temptation would be to make it about her running away from her past, her pain, and need to finally process her grief in a transformative way before she can settle down and make herself a home. Zhao’s movie rejects that easy formula; there are several moments where characters implore Fern to plant roots, to have a comfortable life with a man who adores her, but she can’t. She has to keep moving, from job to job and state to state. It’s not like a rejection of privilege and standing like 2007’s Into the Wild. If Fern could be rich, she’d happily not have to crap into a bucket in her van or sleep in parking lots or scrounge for food. She’s one of millions on the fringes of society because of how disposable so many corporations view their laborers. The opening text tells us that within one year of the factory in Fern’s hometown closing, the chief employer of the town, that its zip code was dissolved. Nomadland doesn’t ever feel like a preachy movie but it definitely has points it wants to raise about how we treat people in need, how business exploits them and their lack of options, and how others view these itinerant Americans and their plight. Really, though, it’s a movie of moments and there are some that are beautiful and powerfully poignant, like a woman stricken with cancer talking about her final desire to return to a lake frequented by birds, or another character discussing the death of his son and how that has informed his view of God and an afterlife. It’s these moments where a character just seems to take center stage and become fully developed, adding to Zhao’s humanist thesis about how every person, no matter their circumstances, is worthy of compassion and consideration. I enjoyed McDormand (Three Billboards) and thought she was a fine entry point into this under-seen world. I also think she was better served as a sort of living journalist letting us discover non-professional actors that open up their hearts and lives and feel like genuine human beings with a wealth of life inside them just waiting to be learned. That gracious, affirmative spirit hangs over every lovely frame and moment in a movie that could be described as Frances McDormand Tries All the Jobs. Still, it’s a movie of moments, and some of them truly sing and others just sort of go by without leaving as much of an impression. Nomadland is a pretty, thoughtful, meditative movie about persistent, stubborn creatures, namely us.