Protagonist (John David Washington) is recruited by a secret organization that is trying to thwart a cold war from becoming hot between the future and the past. Neil (Robert Pattinson) explains about “reverse entropy,” about effect before cause, and that there are machines that can allow people to reverse their direction in time. It’s less jumping through points than it is hitting the rewind button. A Russian oligarch (Kenneth Branagh) and his wife (Elizabeth Debicki) may be the key to preventing a future catastrophe or one that hasn’t happened yet or has already happened. It’s time travel so the tenses can get confusing. That’s not the only thing that’s going to likely confuse you. 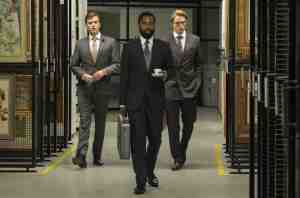 At around the half-hour mark, it felt like every character was talking past me, like they had no intention of being accessible. It is practically maddening to be in a conversation where everyone is talking above your level, relying upon lingo and references you are unfamiliar with, and you can try your best to grasp the basics of context clues to try and decipher a base level of understanding, and then, when you think you have things together, they start talking backwards. That is Tenet in a nutshell. It is a mystery how Nolan expected general audiences to even want to keep up with this. I’m not one of those people that needs my story spoon-fed to me, and I welcome challenging storytelling that rewards multiple viewings. However, the problem with that gambit is that if you require your movie to be seen a multitude of times to be understood, you better guarantee anyone will want to watch it a second time. I’m certain I’ll better understand Tenet with another watch and that I’ll find even more little clues to celebrate the exquisite cleverness of Nolan, but I don’t want to re-watch this any time soon, if possibly ever.

Nolan has been here before with 2010’s Inception, a movie that could have been confusing from its very conception given a heist upon four levels of dreams each with their own sense of linear time. Early on, Inception was also confounding, but slowly Nolan opened up his world, allowing the audience to adjust to a learning curve and process the information we needed to be set by the time the big heist got underway. Even after, we had mysteries and complications to be solved. It was a complex puzzle with layers but it was accessible. I thought early into Tenet we would be following a similar track, and I kept waiting to adjust to the learning curve, for things to gain a momentum. There needs to be rules, a demonstration of the rules, and then we proceed. I guess I understood things on a general level, stopping the bad guys from somehow destroying the world, and special turnstiles that make you go in reverse time, and there’s a palindromic plotting emphasis that becomes a late justification for 90 minutes of mostly boring blather with the occasional set piece. For the purposes of further clarity, I even read the Wikipedia plot summary to fill in the gaps of my personal comprehension, and it didn’t really assist beyond confirming for me that I understood the broad strokes of an otherwise confounding movie. It’s hard not to feel like Tenet is more an expensive, globe-trotting experiment for Nolan than a movie intended for mass entertainment. Again, I’m not deriding Tenet because it’s ambitious. I’m deriding it because it’s indignant of a potential audience.

I cannot stress enough that every time characters began speaking, I liked Tenet less. If somehow the movie had eliminated all dialogue, it might have worked better. It’s not like Nolan’s scripted words offer much comprehension anyway. It feels like the dialogue is nothing but impenetrable riddles about scientific jargon and vague pronouncements often given to too cute dialogue about the nature of time. There were points I just wanted to scream. Of course there were other moments I was straining just to try and understand what was being said. Tenet is another example of Nolan’s self-sabotaging sound design where he makes the volume of characters speaking subsumed to the volume of sound effects and score. It becomes another hindrance to try and understand an already confusing and aggravating movie experience. 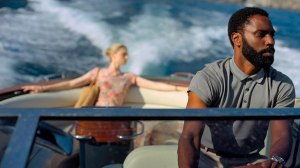 Another factor that made Tenet a slog was the lack of any emotional engagement. Nolan has often been criticized for being a cold filmmaker, one more beholden to the intricacies of his origami-styled plots and surprises. I think this is often an unfair charge but he’s certainly a filmmaker known for his preference for plots that take ownership of character. You would not confuse a Christopher Nolan blockbuster for some mumblecore indie. Even in a movie with as much plot groundwork as Inception, Nolan provides an emotional core with the story of a man literally haunted by the ghost of his wife and his grief over his own culpability for her demise. The climax even involves him having to finally let her go in order to save the day. With Tenet, we get nothing. There’s an abused wife and while I don’t want to watch her get threatened and attacked by her husband, that’s not exactly the same as providing an emotional anchor. She’s, at best, a supporting player. The world-saving stakes are all you’re going to get. I didn’t care about Protagonist as a protagonist, and I didn’t care about Tenet as a secret organization, and I didn’t even like spending time with these people. These characters are boring, but the movie thinks by keeping them moving fast enough, or talking nonsense long enough, that you will fail to notice.

I’m not even fully cognizant of the benefits of inverse time. You can travel backwards and watch people go in reverse but is this really a practical application of technology? Reverse fight choreography can be cool, like people doing reverse flips, and it can also look extremely silly with punches exchanged that look too fake and people scooting on the ground like child trying to break dance. For me, it’s a toss-up whether watching characters run in reverse is surreal and dreamlike or just plain goofy. I guess one could reverse and then un-reverse, more or less traveling back to a point in the past and going forward from there. This means you’ll have to live those extra days, weeks, whatever the time difference, but it also seems to indicate that you must do everything you did before because you have already done it. If this is the case, why bother going back in time if you’re just indebted to doing the same things all over again? Why take a test again when you have to give all the same responses to the same questions? It feels like Nolan wanted to try and make a time travel movie that isn’t quite a time travel movie, so he settled on people running backwards. There is an intriguing disorientation at work when Nolan really plays with the physics of reverse time, but I don’t think this core idea ever fully comes together in a satisfying manner.

The last hour of Tenet does liven things up as we have two large action set pieces that play out with patience and an expansive scope. This is Nolan’s spy action-thriller. A high-speed heist on the road leads to a car chase with reverse cars to combat. It’s the only action sequence where the audience has a good understanding of the mini goals. Even an earlier art heist resulted in raising questions of credulity (“If the security system sucks out all oxygen, and they’re triggering this, why have they not come prepared with their own oxygen tanks?”). The high-speed heist and ensuring chase sequence flat-out works and is pretty cool. The conclusion involves two teams of soldiers, one going forward in time and one going in reverse, and that has such amazing potential for an intricate and exciting culmination of action. Imagine a character going back and forth and jumping from their unique perspectives to aid and inform each team. Unfortunately, in execution it comes across as jumbled chaos. Again, I imagine there are details and parallels I would notice more with a second viewing but I doubt when that will happen. For a movie essentially about time travel, it feels like Nolan has put more careful thought into trying to make his movie a palindrome than trying to come up with engaging and cool things to do with time travel action.

Christopher Nolan is one of the biggest names working today, a man whose risky, expensive blockbuster projects get greenlit because of his artistic audaciousness. You would never want a Nolan movie to simply play things safe. He seems at his most comfortable when it’s playing around with chronology and audience expectations of what moments have meant. There is a reverse palindromic feature to this screenplay I do admire from a writer’s perspective. However, knowing it takes a confounding 90 minutes to get to that reveal means that you’ve had to endure 90 minutes of protracted set up and with characters that are, at best, glib archetypes, empty suits, and guns with people attached to them to occasional bark orders or say confusing terminology. It makes for a very frustrating and at times disengaging viewing experience, one I even contemplated retreating from. I’m glad I stuck it out but cannot say it was worth the time and ensuing headache.