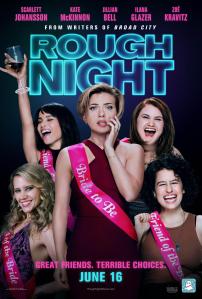 As the girl power counterpart to Very Bad Things, the rowdy comedy Rough Night follows a group of broadly characterized friends through a night of mishaps, but the strangest development is that the funniest moments all center around the men. Jess (Scarlett Johansson) and her gal pals (Jillian Bell, Kate McKinnon, Ilana Glazer, Zoe Kravitz) are celebrating her bachelorette party when they accidentally kill a stripper. From there the ladies have to try and dispose of the body while not getting caught. The movie is rather slow to get started, establishing broad character types for each of the bachelorette partiers. It’s once things get criminal that the movie enters more solid comedic ground. The acting ensemble is rife with terrific comedy stars that know how to hit their material in stride, in particular the boorish Bell and the goofy McKinnon. And yet it’s the asides with Jess’s fiancé Peter (Paul W. Downs, co-writer) where the movie hits its highest marks and delivers inspired comedy. At first the wild atmosphere of the girls’ night out is contrasted with the quaintly tame boy’s night out. Soon after Peter is worried something troubling has happened and is determined to travel nonstop to reach Jess. His traveling moments produce the most unexpected comedy, like a badass montage about something very uncharacteristically badass. It just kept going, trying to maintain the same demeanor, and I was almost in tears from laughing so hard. There’s a sequence at a gas station that could be taught in comedy classes for how well structured and developed it plays out, tying together characters and conflicts and even ending on a sweetly jocular moment. It got to the point where I wanted to check back more often with Peter. I chuckled throughout Rough Night and the energy level of the actors keeps things eminently watchable but it plays it too safe for something so apparently transgressive. The sentimental moments don’t feel earned and the dark comedy doesn’t feel dark enough. Still, when it gets to be weird and unpredictable, Rough Night can be a delight.