As the girl power counterpart to Very Bad Things, the rowdy comedy Rough Night follows a group of broadly characterized friends through a night of mishaps, but the strangest development is that the funniest moments all center around the men. Jess (Scarlett Johansson) and her gal pals (Jillian Bell, Kate McKinnon, Ilana Glazer, Zoe Kravitz) are celebrating her bachelorette party when they accidentally kill a stripper. From there the ladies have to try and dispose of the body while not getting caught. The movie is rather slow to get started, establishing broad character types for each of the bachelorette partiers. It’s once things get criminal that the movie enters more solid comedic ground. The acting ensemble is rife with terrific comedy stars that know how to hit their material in stride, in particular the boorish Bell and the goofy McKinnon. And yet it’s the asides with Jess’s fiancé Peter (Paul W. Downs, co-writer) where the movie hits its highest marks and delivers inspired comedy. At first the wild atmosphere of the girls’ night out is contrasted with the quaintly tame boy’s night out. Soon after Peter is worried something troubling has happened and is determined to travel nonstop to reach Jess. His traveling moments produce the most unexpected comedy, like a badass montage about something very uncharacteristically badass. It just kept going, trying to maintain the same demeanor, and I was almost in tears from laughing so hard. There’s a sequence at a gas station that could be taught in comedy classes for how well structured and developed it plays out, tying together characters and conflicts and even ending on a sweetly jocular moment. It got to the point where I wanted to check back more often with Peter. I chuckled throughout Rough Night and the energy level of the actors keeps things eminently watchable but it plays it too safe for something so apparently transgressive. The sentimental moments don’t feel earned and the dark comedy doesn’t feel dark enough. Still, when it gets to be weird and unpredictable, Rough Night can be a delight.

Set during the first twenty-four hours of the 2008 economic meltdown, Margin Call feels like David Mamet’s classic play Glengarry Glen Ross just set fifty floors higher. It’s a tense stew of ego and hubris and cunning and manipulation and self-preservation, peppered with some salty language. The corporate bigwigs of a fictional financial firm scramble to get out the door first before everyone else catches on to the looming market crash. “There are three ways to make a living in this business: be first, be smarter, or cheat,” says the CEO (Jeremy Irons). Debut writer/director J.C. Chandor brilliantly captures the rationalization of sociopathic greed; the CEO waxes about the historical inevitability of our own self-destructive influences, glibly recounting other market crashes and saying he will survive because the nation’s class systems are fixed. The behind-the-scenes scheming has a sick appeal, witnessing how Wall Street wriggled free of responsibility. This isn’t a far-reaching look into the financial meltdown; it’s more of an insular, thoughtful, occasionally meditative play about the moral questions at play. The prosaic pacing caused quite a slew of yawns in my audience. There does seem to be a never-ending cascade of scenes where two characters will just sit and talk. However, when the writing is this sharp and the actors are all at the top of their game (Kevin Spacey is emotionally spent in a test of loyalties; Irons is charmingly sleazy), then you can forgive some stagnate pacing. Margin Call has a few heavy-handed metaphors (Spacey putting his dog down = the economy!), but overall it’s astute, insightful, sophisticated, and compelling enough to forgive its overreaches. 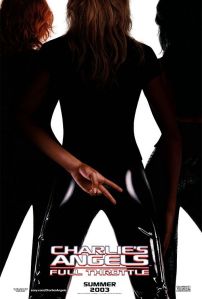 More of the same, except this time all the verve and invention seems stale and reheated. This sequel subscribes to the bigger-better train of thought, so as it continues to get more and more outlandish and the girls become invincible super heroes on par with Neo, the movie tanks hard. Much has been made about Demi Moore’s “comeback” but apparently she wasn’t sharpening her acting muscles during her hiatus. No one said the first Charlie’s Angels movie was within the realm of reality, but in the sequel apparently the Witness Protection Agency has decided to store all their valuable information not in a computer mainframe, a system of files, no, on two magic decoder rings. What the hell? McG returns as director and cranks the style into overkill, set to a radio-friendly soundtrack, but it all seems so ho-hum and excessive at the same time. Quite an accomplishment. No more please.