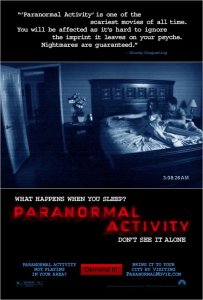 My eyes are bleary. I feel like a walking ghost. My body aches just a tad. I’m over responsive to sudden movement. Not only have I just seen Paranormal Activity, the small indie horror film that has been sweeping the nation, but also I’ve just endured my first post-Paranormal night of sleep. To say it was refreshing would be an outright lie. My then-partner was tossing and turning, routinely grabbing my arm to hold her, also sitting straight up to peer through the darkness of our bedroom, and occasionally she would request that our dog jump on the bed to sit with us for extra support. She and I have seen scary movies before but none have interrupted my sleep patterns like this low-budget sensation. That alone is the best blurb that I could possibly offer to the Paranormal Activity marketing gurus: this movie will make it difficult for you to sleep in your home.

The back-story to this Cinderella tale is that writer/director Oren Peli was hearing unexplained strange noises in his San Diego home. After some research he said, “Why don’t I set up a camera and make a movie about this?” He then hatched a plot involving a young couple, Katie (Katie Featherston) and Micah (Micah Sloat), who hear some bumps in he night while they sleep. Micah sets up a stationary video camera to record the strange happenings as a cool project. It begins with small, subtle noises, then the presence of something unwelcome becomes much more pronounced. Micah taunts the antagonistic spirit, coaxing some kind of response. Katie is terrified because, as they learn from a psychic, this is the same entity that has been following and haunting Katie her whole life; her family home burned down unexplainably when she was a child. It wants Katie. That was the story, though Peli says most of the dialogue was improvised (it shows). The actors doubled as camera operators, the movie was shot over seven days in Peli’s own San Diego home, and the total cost was $11,558, a pittance for a Hollywood movie. So how did this cheap home video haunting take the nation by storm, becoming the indie phenomenon of 2009 and one of the most profitable films in modern history? 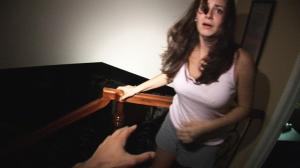 Let’s start with the fact that it’s actually scary. That’s likely what audiences have been responding to — competency. The film is presented as “found footage” much like the similar low-budget horror sensation, The Blair Witch Project (can you believe it?s ten years old already?). The story is presented as factual footage, and Peli makes a point of not breaking the terms of reality. Some of the spook stuff is easy to explain, like lights going on and off in the distance, but there are some moments that are more dramatic and give no hint of special effects. I am impressed by the ingenuity of Peli on his super low budget. I went from being startled to admiring the technical craftsmanship. Paranormal Activity isn’t a big scream movie, it’s more unsettling and the majority of its scary moments occur while the camera is on its bedroom tripod (the tripod should receive third billing in the credits, frankly). Sure, a creaking door or lights magically turning on doesn’t sound like surefire moments of blood-curdling terror, but the fact is that stuff is happening while this couple sleeps, a time when we are most vulnerable, is the point and why it’s scary. Peli structures the movie so that it fosters a slow burn of suspense. By making the camera the only viewpoint, we as an audience feel trapped, much like the characters. The idea that something will get us while we sleep isn’t new but it’s certainly creepy.

The actors work well enough not to betray the “found footage” motif as well. Neither gives a spellbinding performance, mind you, but Featherston and Slout are believable for almost every second onscreen. They’re a couple experiencing a home invasion of a different sort. Micah is more interested in his technical toys than the traumatic state of his girlfriend of three years, and Katie even admonishes him after a scare, “Did you actually run and get the camera first?” Featherston exhibits the most fear and trepidation, and her squeals and cries can be alarming. Their interaction and intimacy doesn’t really communicate a couple of three years time. However, this does not detract from the flick because the title isn’t Relationship Drama, now is it? 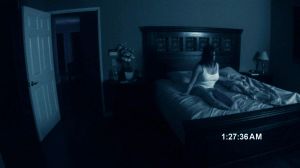 So at this point I need to ask myself, why was I scared during Paranormal Activity and merely amused by the similar exploits in The Blair Witch Project? Maybe it’s the location. The bedroom is supposed to be your sanctuary, your respite. It’s a bit more universal than getting lost in the woods to make a movie. I also think the concept is responsible for my different reactions. In Blair Witch, they were being haunted by a forest ghost who had a thing for arts and crafts. Waking up to stone piles and stick figures just doesn’t resonate like footage of something happening to you while you sleep unaware. Peli does a fine job of making an audience dread what is to come next. Just as I wrote ten years ago for Blair Witch: “The anticipation of the unknown is far more frightening than being slowly chased by a man in a rain slicker. It’s no typical horror flick, it lets you create the fear in your head and let you drive yourself mad with it.” This is why Paranormal Activity works as well as it does. You can immerse yourself and then grip the armrest in fear and then laugh about it later. I also appreciate that Peli solved my number one problem with haunted house movies. You see, if your house is haunted then — MOVE! Simple, huh? Why try sticking it out to regain the resell value when the walls are dripping blood? At least in Paranormal Activity says that the evil spirit is attached to Katie.

Thanks to weeks spent at the top of the box office, even besting the lingering Saw franchise, it is inevitable that Paranormal Activity will balloon in hype that it cannot compete with. Rather than its budget limitations hindering the final product, Peli and his actors have embraced their low-budget aesthetics and produced something effectively eerie and occasionally ingenious. What these people have done with $11,000 (probably the budget for bagels on the pseudo true story, The Fourth Kind) is worth applauding. Like most horror movies, this one will play better with a full crowd ready to ride the roller coaster wave of screams and giggles. Paranormal Activity is proof that you don’t need stars and major budgets to get audiences scared. Your feelings of terror are the great equalizer, which is why cheap but smart and inventive horror movies can easily outpace their bigger budget brethren. Just be prepared for a few rough nights of sleep afterward.