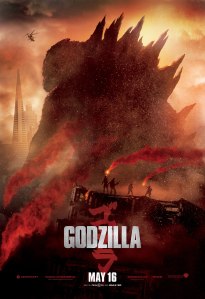 When it comes to the monsters of cinema, it’s hard to beat out Godzilla, and not just because, you know, he’s hundreds of feet high and can breath fire. The famous monster began as a cautionary tale about nuclear weapons, destroying man’s hubris and often the good people of Tokyo. The legendary beast has been hibernating as such since 1998’s not-so-spectacular big-budget return, a film that the Japanese loathed. But like all ancient being, Godzilla has been resurrected again and given a splashy new coating of CGI devastation. If only the filmmakers had decided to leave out the humans and make Godzilla the rightful star.

A scientist (Bryan Cranston) warns the Japanese government of a massive impending danger. The offspring of a giant creature, a Massive Unidentified Terrestrial Organism (MUTO), has hatched and heading straight for the United States coastline. Attracted by nuclear power, the U.S. military tries to lure it away from populated centers. Ford Brody (Aaron Taylor-Johnson) is witness to the monstrous destruction and just wants to get back home to his wife (Elizabeth Olsen) and child in San Francisco, exactly where the creature is headed. There’s also the emergence of an older creature, one that has taken to combating the MUTOs to the death. This is the legendary Godzilla.

The big guy is back in a very different approach from 1998’s Godzilla (i.e. “better” approach). Director Gareth Edwards (Monsters), an avowed Godzilla fan, has made a reverent big-budget ode to the king of all monsters; however, the resulting film is more of a disaster epic than a monster brawl. The perspective is often framed at the human-level, which grounds the film from going too overboard into disaster porn territory like, say, Man of Steel. The effect is thrilling and adds a greater sense of verisimilitude to the mass chaos and destruction. It reminded me in some ways to 2008’s Cloverfield, where a group of characters is just trying to survive the periphery of all the collateral damage of a giant monster. There are sequences that directly relate to Fukushima as well as the tsunami from 2004. It’s almost like somebody watched the stirring movie The Impossible and said, “Yeah, give us some of that in our giant monster movie.” I don’t know if these sequences are entirely necessary. Watching Ford carry around a little Japanese tyke, wondering where his parents might be amidst the confusion post-monster attack, it relates to our modern response to tragedy and worldwide disaster, but do you really want to watch Ford have to find this kid’s parents? If there is a commentary to be found in the movie, it’s the uncontrollable and destructive power of nature pushed to the brink by mankind’s own energy crises. After all, the MUTOs are attracted to and strengthened by consuming nuclear energy. Godzilla is argued to be an “alpha predator” but also a figure to bring balance back to nature. I think it means that there can be only one giant monster and Godzilla is going to eliminate the competition.

But the real question of any giant monster movie is the degree of satisfying, smash-em-up fun it provides, and the new Godzilla is a mostly agreeable venture. The action sequences, mostly saved for the climax, are cool and well thought out, but Edwards proves to be a brilliant visual stylist than a composer of action. This is a movie where the moments stand out better than the action. Edwards’ command of cinematic visual arrangements is at Spielberg levels of being a natural showman. I can easily think back on small moments, images that pop, visual reveals that are executed with aplomb, far more so than a central example of an action piece. I loved the horror-esque reveal of the elevated train being on track to head right for the MUTO. I loved the hide-and-seek nature of Ford waiting for the MUTO to pass. I loved when Ken Watanabe’s advice was literally just, “Let them fight” (I started chanting it in my seat). My favorite part of the movie is actually what was previously shown as a teaser trailer, namely Ford and several other paratroopers diving into the destructive city scene. The eerie hum of the 2001: A Space Odyssey monolith plays over, each man has a red flare streaking from their leg, and we watch them quickly descend through the sky, nervously awaiting what is on the other side of those heavy clouds, only to discover a city on fire, glowing like a hearth, and through the goggles, a monster fight taking place. The entire sequence is a visual standout, a thrilling set piece, and a reminder that Edwards has more on his mind.

Edwards does a lot of intentional teasing of Godzilla, so much so that it can get frustrating for an audience. I understand he’s building to a payoff reminiscent of Jaws; we’ve been teased for so long that we will go nuts when we finally see Godzilla in full glory, and it works. However, it also works as a detriment. There are several points in the film where it looks like we’re about to get some exciting Godzilla/MUTO action, or even just a MUTO wrecking havoc, and then the film cuts away, often to news footage. It’s a choice that begins as artistically clever but can become maddening in time. There is a lot of visual obfuscation throughout the film, far more so than the same compliant I had with last year’s Pacific Rim. Edwards will show Godzilla’s tail just swinging behind a building, or his colossal foot coming down with authority, or the wispy shadow of giants in billowing clouds of smoke. All those near misses can add up to cinematic blue balls. And so much of the action and destruction happens at nighttime, leading to a dour color palette heavy in grey and dark blacks, making the good stuff all the harder to see. I cannot even fathom why someone would want to see this film in 3D with those darkened glasses. It’s 90 minutes of foreplay that you may start to grow restless that we’re getting a Godzilla movie that will never show the goods (shouldn’t Godzilla be in a Godzilla film?) 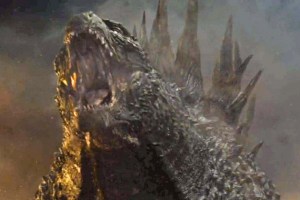 The problem with a disaster movie on a human-scale is when you don’t give a damn about any of the human characters. Now, Godzilla should be the star of any Godzilla movie but I understand execs fearing that their monster movie needs some relatable human drama. The problem is that the writing doesn’t do anything with these characters, forcing them into tidy and token roles that we’ve come to expect from large-scale disaster movies. Did anyone really feel anything about whether Ford would get back to his wife and child? Did anyone feel anything for anyone in this movie, beyond a slight reservation whether they would be squished, if even that? I’m not expecting three-dimensional characters here but even Roland Emmerich films do a decent job of establishing a milieu of people at various points of the globe we know will somehow coalesce together. There is so little effort to mask the character’s grand design: exposition mouthpieces, symbols of military threats, the noble family man, the beleaguered and crying wife. Seriously, there is a great cast of actors in this movie and they are given nothing to work with. Olsen (Oldboy) gets to look realistically scared and cry but she deserves so much better. Cranston (TV’s Breaking Bad) gets all the best yell-worthy lines. But it’s really Taylor-Johnson (Kick-Ass 2) who suffers the most since he’s placed as our impassive stand-in for a human protagonist. He’s so blank throughout the film and there’s little charisma to pull you in. His character, and the performance, feels no better than an elevated extra, Grunt #13. When we have to spend 90 minutes with these lackluster characters rather than some awesome monster fights, that’s when the film flounders.

I’m conflicted about the end results of Godzilla, an entertaining, surprisingly artistic film that can nail small moments of cinematic grandeur but has trouble matching its vision. The human-scale approach grounds the action, but do we want a giant monster movie grounded from a limited vantage point? The constant teasing builds a payoff for finally seeing Godzilla, but don’t we want more actual Godzilla in a film bearing his name? The human-scale, as well as the slow dodging of showing Godzilla, mean the storytelling emphasis is on an array of human characters, but what happens when they are poorly written, poorly developed, and lacking in charisma? The movie does more right than wrong but I’m left with the unmistakable feeling that, while a step in the right direction, there is too much self-sabotage holding back the movie. It actually made me re-evaluate and appreciate Pacific Rim even more. I can’t say this movie is nearly half the fun as Rim was. The monster design of the MUTOs is rather lacking, resembling a cross between the monster from Cloverfield and more patently the arachnid aliens of Starship Troopers, down to the heads that look like staple removers. Edwards has proven himself a big screen talent with a terrific feel for grandiose visual spectacle. I just hope if there is a sequel that we can skip all the slow buildup and just get to the main event – Godzilla beating the crap out of some other lesser yet still giant monster.