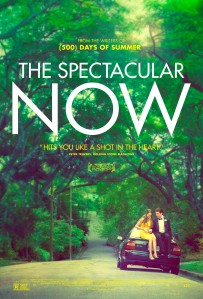 I say this as a fan but John Hughes was probably the best and worst thing that happened to the modern teen movie. He certainly brought an extra level of pathos and relatability to the genre, but then again he also dealt in stereotypes, often languishing his characters to stock archetype ghettos (the Jock, the Prep, the Nerd, etc.). In the ensuing decades, it’s been hard to break as many teen films, of those aimed at teenagers, have casually dealt in these easy labels. That’s why something like The Spectacular Now is such a welcomed respite. Here is a teen movie that aims to tell a story about people and their problems, not simply a regurgitation of high school cliques and clichés. This isn’t a film where all the pieces magically come together; this is a high school movie that more closely approximates real life. This is more Cameron Crowe than John Hughes material.

Sutter (Miles Teller) is the most popular guy in school, or so he’d tell you. He’s the life of every party, the kind of guy who everyone enjoyed, and the guy who could charm the pants off any girl. He’s recently broken up with his girlfriend Cassidy (Brie Larson), though still harboring serious feelings for her. Of course the best way to get over the old girl is with a new one, and Sutter sets his sights on Aimee (Shailene Woodley). She’s a smart, somewhat quiet gal that immediately takes a shine to the spotlight that is Sutter’s affections and attention. He’s not entirely over his old girlfriend, still angling to get back together, but also Sutter’s whole perspective could be summed up as an extreme case of carpe diem. The kid is partying like there’s no tomorrow because he’s convinced he has no real future, so he’s going to live it up while he can.

You’ve easily seen this movie before but it’s rare to see it given so much depth, maturity, and care. At heart, this is the story of Sutter learning he’s a screw-up and getting his life back in order, learning some self-control and responsibility, and winning over the good girl. But The Spectacular Now is so much more than that, and it’s especially sadder than you may have expected with its wise-talking, charming protagonist. This is the story of a teen coming to grips with parental abandonment, gaining insight into his own delusional detours to avoid pain, and the horrible realization that he is, in his present reckless condition, a bad influence dragging down the future of the girl he genuinely cares for. That’s a lot of heavy emotional drama and none of it revolves around the clichéd staples of teen movies, like those checkpoints such as prom and the Big Test. This is the story about one damaged man coming to terms with the state of his damage and gaining the courage to change his direction. He’s an alcoholic but the movie doesn’t ever put the narrative on hold for soapbox preaching. If anything, Sutter’s alcoholism is handled so subtlety, with most character silently acknowledging but unsure or indifferent to act, that it may strike a few chords with audience members. Then there’s the fact that none of this is heavy-handed; the filmmakers have done a fabulous job of giving each character credibility. They behave like real human beings. Even the easily slotted antagonists, namely Cassidy and Sutter’s deadbeat dad, are given shades of recognizable humanity and depth. Even though Cassidy waffles in her feelings for her ex, I cannot dislike her because her character portrayal is so honest. She’s struggling with her feelings for a screw-up with redeeming qualities. That’s fairly relatable, even if she’s not our winsome romantic lead. The filmmakers drag a typical teen movie story into our real world setting, adding depth and telling observance. You will recognize many of these characters.

There are few superlatives to describe the cuteness of the blossoming relationship between Sutter and Aimee. It’s so smooth and relaxed yet completely believable, and the two actors have such a warm and natural chemistry with one another, enough that I seriously contemplated if they dated outside the film (rumored but nothing conclusive). You feel their budding affections, the sweet swoon of young love, and the hiccups along the way. Woodley (The Descendants) does an outstanding job with her mannerisms and affectations; her awkwardness around her feelings is adorable, but not in that prefabricated cutesy way often ascribed to the oft-mentioned Manic Pixie Dream Girl roles. She’s a fairly normal teenager on the fringes of high school, keeping her nose down and looking ahead. In movie terms, you couldn’t readily classify a gal like Aimee, and that’s because she’s a real character fully fleshed out by the screenwriters and the actress. Woodley’s performance is near invisible of acting tropes and constraints. She just dissolves into the character as all exceptional actors do.

But this is Sutter’s movie and, in accordance, Teller’s (Rabbit Hole) film. The young man puts on an acting camp in this film, shedding the various layers of armor from his sad clown of a character. As I said, we’ve seen this character before, but Teller and the screenplay are able to give Sutter such extraordinary depth. The carefree life-of-the-party character is turned into an introspective character study, essentially examining the darker side of Ferris Bueller. He’s using alcohol and his blithe attitude to blunt the pain that he fears he’ll end up like his old man, that his life has already peaked and he’s not even out of high school. Teller is such a successful charmer that he already wins you over to his side despite some boorish behavior because we see that the guy has a good heart. In the film’s opening, he’s propping up his friend to finally get the guy a girl, and the ensuing mess ends Sutter’s own relationship. The last act involves Sutter coming to grips with the negative impact of his actions, notably on Aimee. Teller is so effective at giving you glimpses of the sadness eating him whole. His concluding scenes when he finally breaks down feel like a hard-fought victory for the character as he confronts his doomed fate. At every turn, Teller impresses, and compounded with Woodley, they form an unbeatable team of sterling young acting talent.

Special mention to Kyle Chandler (Super 8) for his pivotal walk-on roll as Sutter’s bad dad. He’s so pathetic and so desperate and so wonderfully realized by Chandler. He doesn’t get a Big Scene, he doesn’t get a Big Speech, he doesn’t even do anything out of the ordinary for a shifty, unreliable, selfish drunk, but those few minutes he’s onscreen, it all becomes so deeply sad and clear where Sutter’s life is headed without intervention.

The only depiction that I had trouble believing was Sutter’s almost consistent drinking and driving. Throughout the film, he has his trusty Styrofoam Big Gulp cup with him, spiked with booze. The man hasn’t graduated high school yet and is already a high-functioning alcoholic. Because of this I can believe that people would not be alarmed seeing him drive after imbibing a few drinks. However, the man is constantly drinking while behind the wheel of an auto and several times he appears completely trashed. I find it alarming as well as a bit far-fetched that not one character, not even Aimee, would raise objection to Sutter’s continued dangerous behavior. We also witness several scenes of Sutter drinking in bars. It’s conceivable he has a fake ID at his disposal, and it’s even more conceivable that he could talk his way into any establishment, but it’s more food for thought. Then again maybe this is just one of those towns where nobody cares about innocent lives being snuffed out by drunk drivers.

The Spectacular Now is an earnest film that doesn’t overdo it, providing challenging life lessons to fully formed, complex, believable characters. It doesn’t sugarcoat the heartache and harsh reality out there for vulnerable teens. It’s a charming romance tied up with an insightful character study of one young man hiding his sadness and anxiety of life’s disappointments with humor and booze. Thanks to the tremendous acting of its onscreen pair, you root for Sutter to turn his life around because you see value in him as a person, even if he doubts it himself. You’re on his side from the start, and you know how nicely he matches up with Aimee. You want this movie to pull off the spectacular, and for long stretches it feels just as if that will happen. The ending aims for ambiguity but is far more hopeful than its source material. I was charmed thoroughly by this film and its lead characters but even more I was thoroughly engaged in their dilemmas, moved by their struggles, and encouraged by their perseverance and growth. The Spectacular Now (extra points for never even having a character spout the title) is a funny, warmhearted, measurable restrained, knowing film that could open eyes. It may not be spectacular to some, but it’s surely a great film.