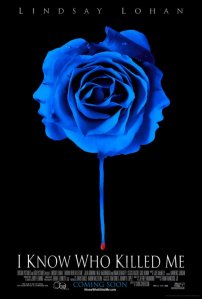 We interrupt the nonstop barrage of Lindsay Lohan media coverage and speculation to bring you her movie, or, more accurately, further proof that Lohan is in desperate need of a career makeover. The tabloid target has a pretty shoddy track record of late when it comes to picking acting projects, so it’s no wonder that her splashy private life has overshadowed her cinematic duds. Thanks to a second summer DUI Lohan was unable to promote her new movie, I Know Who Killed Me. This may be a blessing in disguise because if I were her I would want to draw the least amount of attention possible to what is destined to contend for the worst film of 2007.

We open to Aubrey (Lohan) reading her story in her high school class. The story revolves around a stripper named Dakota and the amorous attention she earns from creepy older gentlemen. One night Aubrey goes missing and the police believe she may be the next victim of the local blue-gloved serial killer that hacks off the limbs of his victims. The last girl, currently residing in the morgue, is missing her right forearm and her right leg. Her parents (Neal McDonough, Julia Ormond) fear the worst. Then a motorist finds Aubrey’s mutilated body on the side of the road. She wakes up in the hospital and will survive, except the problem is that she has no idea who any Aubrey is; her name is Dakota and she worked as a stripper. She vows to find the “real” Aubrey.

This films is sleazy and tries to energize a lame straight-to-video thriller with some tawdry turns. Without Lohan’s name, I Know Who Killed Me would never have gotten a theatrical release. The torture sequences are drawn out to the soundtrack of Lohan’s muffled screams. The violence fails to excite or horrify, but instead it just seems like a sorry attempt to ape the success of recent torture-heavy horror flicks. 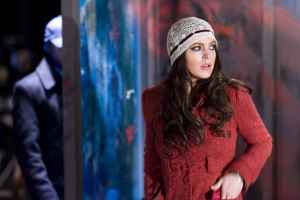 The sex is even less believable. Aubrey/Dakota, fresh from the hospital, beds the quarterback in one of the least convincing, most unintentionally hilarious sex scenes of recent memory. She throws the jock onto her bed and pins him down for a good pumping. In the ensuing two minutes, the pair engage in exaggerated and noisy PG-13 sex where the woman stays on top and keeps her bra on the whole time (does any woman do that?). The whole time the movie cuts back and forth to Aubrey/Dakota’s mother listening and furiously cleaning the kitchen sink. I think the juxtaposition is intended to be funny, and it is, just not in the manner the filmmakers were probably hoping for.

The movie would be more revolting if it weren’t so incomprehensible. I Know Who Killed Me begins to disassemble at a fantastic rate of idiocy once it attempts to explain its central Aubrey/Dakota conflict. But the movie only presents two options: 1) Aubrey and Dakota are the same person and she just created a fictional persona as a means of post-traumatic stress (yawn), or 2) somehow there are TWO Lohans on this planet (what?). The first scenario is pretty dull and obvious and way too feeble for such a dank exploitation thriller. The second scenario requires a scheme so convoluted and ridiculous that it cannot be taken seriously. In the end, the movie becomes Saw meets The Parent Trap, and it’s every bit as terrible as you would concur from such a description.

For the sake of the morbidly curious, I will be discussing some heavy-duty spoilers to fully shine the spotlight on how ludicrous the movie gets. Don’t say you were not warned. Aubrey/Dakota keeps swearing she is indeed her own woman but no one seems to believe her. She researches the unexplainable via the Internet and it is here that she gathers the theory of stigmatic twins. The idea is that whatever happens to one twin will magically happen to the other, no matter the distance and no matter the situation. In the online example, a man with gambling debts is shot in the throat, and thousands of miles away his twin brother bleeds to death thanks to a perfectly placed and ill-timed hole in his own throat. I Know Who Killed Me tries to wrap up its questions with answers that would seem preposterous even in a soap opera. Not only does the film give us the old long-lost twin chestnut but it also goes the extra inane inning to say that one twin endures whatever happens to the other. So when Aubrey is losing limbs during her capture, Dakota is mysteriously waking up some considerable weight loss. If my limbs were disappearing I might consult a doctor. Essentially, if there’s any merit to this theory, the best way to get revenge on your twin (long-lost or not) is through extreme masochism. 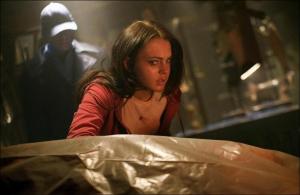 I Know Who Killed Me is littered with stupid behavior and stupid plot points that stick in your brain. A doctor fixes Aubrey/Dakota with a pair of prosthetics – a fake leg and a robot arm. He slides the robot hand onto her stump and it reacts to her nerve impulses. As soon as I saw this scene I blurted out, “Oh my God, Lindsay Lohan becomes the Terminator!” Where the scene earns its stupid wings is that the doctor says she’ll have to charge her prosthetic when not in use or else the battery will go dead. Naturally, I’m thinking he’s referring to the robot arm of doom, but no, he’s talking about her freaking leg. Aubrey/Dakota’s leg amputation is below her knee; therefore this fake leg is little more than a pole. There’s nothing mechanical to it. Why does it need to be plugged in? Will it hop away? It doesn’t matter because the leg and arm never pose any trouble or danger for Aubrey/Dakota. It’s a strange setup without any payoff.

The bloody ending to I Know Who Killed Me is such a mess that it takes special attention just to pick apart its awfulness for further clarity. Aubrey/Dakota figures out the whole complicated rigmarole and declares in titular fashion, “I know who killed me.” Given the silly stigmatic twin theory, even this statement is incorrect from a tense standpoint (if it was true she wouldn’t be able to utter the words). Aubrey/Dakota and her dad head off to the dismembering serial killer’s home without bothering to contact the authorities. She says they don’t have time because, apparently, cell phones do not exist in this universe. I don’t know how it’s possible for Aubrey/Dakota to dig up a grave with one arm. When she goes running into the woods she’s looking for an owl from a vision. That’s good. It’s not like the woods are big or have more than one owl. For that matter, how did Aubrey even get kidnapped in the first place when she was among a large crowd on a busy sidewalk? Would no one have noticed and done something? Even the identity of the serial killer cannot give the movie a sense of finality that it wants. This is your standard serial killer movie where the killer has no working motivation and their identity is relatively meaningless. The limb-slicing maniac might as well have been the janitor seen in the background of one scene for a fleeting moment.

Lohan gives a performance that suits the material – dreadful. Her idea of a bad girl seems more like a perturbed and insolent child. Lohan gets to hurl her share of F-bombs but never seems adult in whatever she’s doing onscreen. I Know Who Killed Me is a depressing low point for such a once-promising young actress who had the world on a string.

Director Chris Sivertson seems to know he’s the captain of a doomed vessel. He overwhelms the movie with irritating lighting excesses. Sivertson takes a cue from Shyamalan and ramps up the color symbolism; there’s blue roses, blue gloves, blue killer tools, blue stained glass of blue roses. You may start to wonder if the Blue Man Group suddenly became a symphonic serial killing side project.

I Know Who Killed Me is a disaster in every sense of the word. The ineptness on display is staggering. The movie is trash from start to finish but it’s not even redeemable trash. The movie tries to cover its numerous plot holes with images of Lohan canoodling with a stripper pole. I Know Who Killed Me is a ludicrous, incomprehensible, and rather sundry thriller that won’t help Lohan’s troubled life. I have a lot of good will for Lohan after her performances in Freaky Friday and Mean Girls. I want her to succeed, but truthfully, if she needs to know who’s killing her career, the answer is in a mirror.