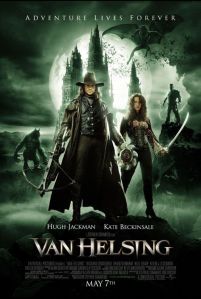 Crossover movies have a distasteful history in the world of cinema. Some movie exec gets the notion, “Hey, why can’t two great tastes taste great together?” But what we’re left with is usually uninspired (The Flintstones Meet the Jetsons notwithstanding). Crossovers for horror movies are the worst of the lot. For every Freddy vs. Jason there’s a dud, like 1966’s Jesse James meets Frankenstein’s Daughter. That year went down in the annals of cinematic history, however, as it also gave us Billy the Kid versus Dracula, marking two entries in the expanding genre of cowboys battling famous monsters (as far as I know, this genre still stands at two movies). So what can one expect from Van Helsing, a big-budget creature feature that includes Dracula, Frankenstein and the Wolfman?

Van Helsing (Hugh Jackman and a really big hat) is a secret soldier for a covert order of the Vatican. This covert order dispatches monsters and creepy-crawlies the world over. He’s been ordered to assist Anna Valerious (Kate Beckinsale), the last in a Romanian family line that has sought to kill the infamous Dracula (Richard Roxburgh). It seems that their family line is dwindling. And Anna’s brother being turned into a werewolf doesn’t help the situation. If her family line dies before Dracula then they cannot enter heaven. Van Helsing comes to town to help out the locals who are terrorized by Dracula’s flying brides. Van Helsing effectively kills one of the vamp ladies and is celebrated as a hero by the village. As he gets closer to Anna he also learns more about his own mysterious past and his connection to a certain figure with big teeth.

The Big D has a dastardly plan. He wants to find Frankenstein’s monster (Shuler Hensley) to channel enough power through him to awaken zillions of goo-sacks harboring the vamp’s undead brood. Of course, Frankenstein’s monster isn’t too keen on this. Together, he and Van Helsing, with the help of Anna as well as a comic relief monk, battle to stop Dracula from unleashing his children of the night.

Van Helsing is stupid, stupid, stupid. Director Stephen Sommers exists in his own indulgent world where bigger is better and some CGI spackle will fix any plot holes. He makes check-your-brain-at-the-door popcorn movies, but a “popcorn movie” is no excuse to forgive a rambling, incoherent, loud, stupid mess. I liked the first Mummy flick and even found some good with the second, but Van Helsing is Sommers at his rock-bottom worst, gorging on a trough of special effects and vomiting the results onto the big screen. Sommers’ idea of character development is knocking people through walls like they were in a Looney Tunes cartoon.

Van Helsing raises some interesting questions, like why do Dracula’s brides morph into flying demons that are conveniently genitalia-free? Why does a werewolf rolling over the top of a carriage somehow cause it to catch on fire? Why does Dracula keep his magic lycanthropy cure in the open? It doesn’t matter. Van Helsing is so straight-laced about its absurdities that questioning them will just get tiresome.

Not that you would expect much, but the acting in Van Helsing is bad. Beckinsale’s accent couldn’t be less convincing if her role were played by Charo. The trio of Dracula’s brides are played by swimsuit models and let me just say their performance is on par with what you would expect from swimsuit models. Roxburgh is quite possibly the worst vampire in the modern history of vampires, and that includes Blacula, Count Chocula and Tom Cruise. He couldn’t look any less sinister if he was in a diaper and bonnet. What’s up with those strands of hair that dangle in his face? Why do the Van Helsing creators want their Prince of Evil and son of Satan to look like he was the keyboardist for some 80s pop synth band? 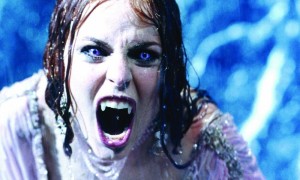 This overly long film feels like a seven-year-old’s book report that he hasn’t read: it’s like a child is making this up as they go. “And then … a werewolf pops up … and then Dracula’s flying brides … and then they all need Frankenstein’s monster ….” Seriously, were the penning this script on the fly? It’s a $150 million improv film. The reels of the film could be switched around and no one would be able to tell the difference. Van Helsing is one long, exasperated action sequence that drags its heels instead of wowing. It beats the audience into submission with its stupidity and redundancy.

The entertainment level of Van Helsing is exceedingly weak. It runs an eternity, which wouldn’t be a problem if one were intrigued by the story, the characters, or the action sequences. The action could have been suitable but Sommers has gotten less reliant on the physical and more superfluous with his CGI. Watching a CGI monstrosity smash into a CGI monstrosity before a CGI background where no semblance of reality is present grows tiresome after 130 minutes. The effects are passable, but they overload the viewer and numb whatever slight interest may have existed for the classic monsters.

What should have been a clever homage turns instead into a hollow marketing ploy that’s so frenetic and tireless with its manic pacing and bad special effects. Even the many attempts at humor are flat. It has to be some kind of apocalyptic sign that Hellboy and now Van Helsing have been unleashed unto the innocents of this world. Some will find Van Helsing decent popcorn entertainment, but most will grow weary of its sloppy design and wafer-thin substance. For me, this is one to avoid, period. There isn’t an ounce of fun to be had while sitting through the painful pair of hours that is Van Helsing. This is one monster mash that’s a real monster mess.