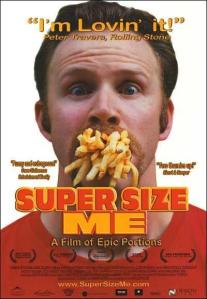 Morgan Spurlock was just sitting on the couch one Thanksgiving. He saw two overweight girls on TV who were suing McDonalds because they blamed the fast food giant for making them obese. Spurlock got off the couch and was inspired. He set off to see what would happen to a healthy adult body if he ate nothing but [i]McDonalds[/i] food for a 30 day period. The results are Spurlock’s award winning documentary, Super Size Me. Spurlock monitors his progress with a team of doctors. He follows certain guidelines as he begins his fast food binge: 1) He must order everything off the menu at least once; 2) He must eat McDonalds three times a day; 3) If someone asks him if he wishes to Super Size his order, he must comply.

The results are staggering, if a tad expected. Spurlock gains 30 pounds, loses his sex drive, experiences what he fears are chest palpitations, and develops symptoms of depression when hes not stuffing his face with French fries and the like. Spurlock starts out wide-eyed and giddy at the prospect of living every kids dream at first he is awed by the food but by the halfway point hes noticing a discernible change for the worse. Hes starting to develop an actual dependency on his subject. Along the way Spurlock interviews an assortment of dieticians, a man who’s eaten 20,000 Big Macs, doctors, health trainers, lobbyists for food corporations, Jared from Subway, and tries ever so hard to garner an interview with a McDonalds spokesperson (he calls about 17 times). The result is a sprawling look at what makes our fat nation tick, and the weird, wonderful, and scary people within. 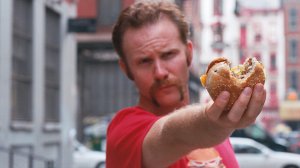 Spurlock puts a lot of gut-churning effort into stating the obvious. You mean eating nothing but McDonalds is bad for you? Stop the presses! Perhaps for his follow-up, Spurlock will unleash a searing expose telling us not to look directly into the sun, stick our tongues to icy poles, or place our hands on a hot stove. The world waits. Even though Spurlock’s McDonalds diet gimmick grows somewhat boring (watching someone eat is about as exciting as watching someone brush their teeth), Super Size Me’s true strength lies in the tangents it takes on its otherwise high-fattening journey to artery corrosion.

Spurlock examines what it is in our culture that makes us more prone to obesity, and the results are equal parts startling and fascinating. The films best moments occur when Spurlock looks at the national school lunch programs and how kids are already being molded to live unhealthy lifestyles. At the same time in our nations history, food programs are getting less healthy (pizza, fries, soda) and mandatory gym programs are on a steep decline. The effects of this segment are far scarier than watching a grown man balloon in weight.

The film follows the Michael Moore (Fahrenheit 9/11) style of documentary, minus the distasteful half-truths. Spurlock knows that humor is the best way to get a point across, so with the use of clever animation he throws every statistic you can imagine out there, hoping that some will stick. Some are obvious, some are amusing, and some of the information is startling when visually represented, like the amounts of sugar and fat Spurlock consumed on his 30-day diet. Super Size Mes results retain Moores signature underdog-fighting-the-Big-Boys method that creates a rapport with the audience, but it also refrains from any sort of bullying. Spurlock doesn’t have the broad charm of a Moore, but hes likeable enough and keeps his information as the heart of his documentary and not the fairly silly gimmick. 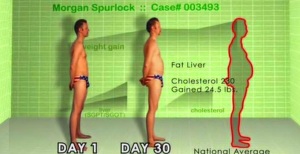 With this new genre of Gimmick Documentaries, there is a greater sense of voyeurism than in the genres usual outpourings. The central concept is watching a man essentially destroy himself, and there is a perverse pleasure in viewing medical changes that scare the crap out of Spurlock’s teams of dumbfounded doctors. So while Spurlock’s odyssey may not always be stupefying, it usually is genuinely entertaining in some form or another.

Spurlock’s excess is our revelry. Hes crafted an intelligent, entertaining, and sometimes grotesquely disturbing portrayal of our Fast Food Nation (I live in the sixth fattest U.S. city, Columbus Ohio, by the way). Fans of muckraking documentaries should be delighted, but Super Size Me has the appeal to reach out to a wider, more divergent audience. Spurlock’s film, despite some inherent flaws, is a strong wake-up call. Super Size Me is a lucid debate about personal responsibility, the boundaries of corporations, and the possible future health of the fattest nation on earth (eat your heart out Norway).

In the end though, it looks like Spurlock is having the last laugh. His film was a hit at the 2004 Sundance film festival, and shortly after McDonalds announced they were officially phasing out Super Size portions from their menu. They denied Spurlock’s film was the cause of their Super Size Slashing, but it doesnt take a genius to see through the corporate rhetoric.

I confess that Super Size Me really got to me and motivated me to live healthier. I was determined to exercise more regularly and eat less junk food. I was empowered. And then I saw a McDonalds on the way back from the theater and, well, the #1 plan, Exercise More Thoroughly, was scratched in favor of a #2 Value Meal (the double cheeseburger one). Carry on Spurlock; carry on my Fu Manchu-ed son. Your documentary is entertaining and, at points, fascinating, but I’ll get on that treadmill next week.

Posted on May 8, 2004, in 2004 Movies and tagged documentary, morgan spurlock, oscars, sundance. Bookmark the permalink. Leave a comment.