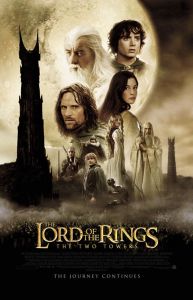 My countrymen and fellow Americans, I come here not to praise Lord of the Rings: The Two Towers but to bury it. I don’t know if it’s a result of being the bridge between the beginning and end of this saga (taking the role of neglected middle child), or a result of unmet sky-high expectations, but I may be alone here in saying that Two Towers was a letdown. I’ll try and frame my reasoning as to not be attacked by hairy hobbits and men with pointy hats and long flowing beards.

1) Story structure. Unlike Fellowship of the Ring, where were introduced to a rich world and have suitable character set-up, the second LOTR film puts almost all our characters on the backburner and gives us an insufferably long subplot involving a king and his brood. The movie peters out an ending and seems to throw its hands in the air saying, “See ya a year from now.”

2) Length. This wasn’t a problem with the previous film but man did Two Towers become unbearable as it went. Some described the first film as three hours of walking; well the second could be described as two plus hours of folks hyping a battle and then — a battle. Seriously, theres a lot of talk about a significant battle and that’s it. An hour could have easily been cut from this. It got to the point where my girlfriend was sprawled across my lap pleading for me to somehow make the movie end.

3) Characterization. So much time is spent doing nothing you think the film would further round the characters? Oh how stupid you would be. Nothing new seems to be drawn from any character, with the exception of the treacherous yet likable Gollum. Several people from Fellowship (Liv Tyler, Cate Blanchett, Hugo Weaving, Ian McKellen) have screen time that amounts to no more than a cameo, so why in the world aren’t we getting anything more from our already established heroes? Everyone just looks friggin bored. As was I.

I re-watched Fellowship and all of the reasons Two Towers suffered were not evident. So what does this tell me? Nothing particularly, except not to see the movie in the theater again. Two Towers is by no means a bad film. The cinematography, production and special effects are all breath-taking and sweeping. I’ll still look forward to seeing the next, and last, installment in Peter Jackson’s Rings epic, but Two Towers has left a bitter taste of disappointment to linger upon.