Before one can assess Talk to Her, the new Spanish import from famed writer/director Pedro Almodovar, one must come to grips with what they have seen. It’s not every film you see that has a giant vagina. Yes, you read correctly dear reader, a gigantic yet scalable recreation of the most sensitive part of the female anatomy. Was there also a giant penis you might reasonably ask? No, but there was an incredible shrinking man that burrowed into the enormous vagina and lived the rest of his days with the labia and clitoris as his next-door neighbors. And what may be even more surreal is that all of this, thematically and metaphorically upon retrospect, makes absolute sense.

So maybe this opening salacious salvo was a bit hyperbolic, but describing Almodovar’s unusual meditation on life, love and death can prove quite ponderous. To explain the story of Talk to Her is to miss its complexity and richness. This is a film destined to spark conversation afterwards. The giant vagina guarantees it.

Almodovar’s colorful melodrama centers on two sets of relationships. Benigno (Javier Camara) is the most attentive boyfriend a woman could have. He talks to former ballerina Alicia (Leonor Watling), washes her hair and makes sure she gets plenty of exercise and attention. Oh yeah, Alicia has also been in a coma for four years. Benigno carries on like he was involved in a normal relationship, except the woman of his heart cannot return a single glance. 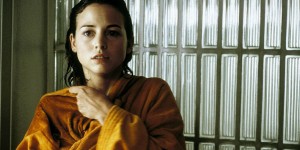 Marco (Dario Grandinetti) is recovering from a former relationship when he falls completely in love with Lydia (Rosario Flores), a female bullfighter. She is having trouble competing in a very male dominated “sport” (I don’t really consider stabbing animals a sport per se). At the start of a bullfight Lydia is horribly gored and dragged around the arena like a rag doll. The results leave Lydia lying in a coma with no hope of ever waking up. It is at the hospital where Marco meets Benigno, who is one of the most helpful nurses. He helps Marco overcome his grief over his fallen love. Benigno shows that unresponsiveness and death cannot deter a man’s love. The two men bond and become very close; however, dark clouds are on the horizon, as Benigno’s fantasy cannot last much longer.

Almodovar has routinely enjoyed tweaking the establishment, especially gender roles and religion (there’s a few tacky priest molestation jokes), but with Talk to Her he attempts to forge serious drama through odd circumstances (ballerinas, bullfighters, giant vaginas, oh my!) and all without the use of irony. The result is a quietly affecting film that burrows its way inside you, much like the shrinking man burrows into … well, you remember.

The movie is darkly comic in its portrayal of Benigno’s delusional relationship, and yet Talk to Her is also a celebration of love and friendship. The affection that is shown is perplexing but also transfixing with the ability to love someone who is mentally not even there. The film questions the compensations we make for love. Some people pretend that their mate is a different person and glaze over character flaws. Could it not be possible then that someone would compensate for an entire person?

Almodovar has created a very female centric film despite our female leads spending the majority of their screen time lying perfectly still. Talk to Her is an engrossing and intriguing character-driven story. It may start out like a sick joke but the layers of humanity Almodovar effortlessly injects into his story create the most bizarrely touching movie of 2002. And it does have the largest vagina you’ll likely see in your life. At least, I hope it’s the largest.