As I type this I feel a slight twinge of guilt about what I feel I have to do. After all, I did interview Angelina Jolie for my college newspaper in the spring. But if I hold back it would be doing a disservice to all those faithful theater patrons that pay upwards of ten dollars for cinematic entertainment. So, just to start off, I’d like to give just a few examples on the idiocy and ribald stupidity of Lara Croft: Tomb Raider: The Cradle of Life.

SHARK: In the opening sequence our voluptuous adventurer Lara Croft (Jolie) has discovered an underwater temple. Rival raiders kill her crew and damage her underwater equipment. The temple starts to flood and Croft is trapped. So what does she do? She cuts her leg to let the exposed blood draw a shark we had seen previously. She punches the advancing shark in its nose and then rides its dorsal fin as the shark speeds to the surface. What? How can anyone know the direction a shark is going to go? Is it like a friggin elevator; press for up?

HIDE OUT: So the nefarious villain in this sequel is actually a guy who looks a whole lot like Alfred Molina (Frida). This bad guy (his name is Jonathon Reiss if youre inclined, but the name, like the character, are instantly forgettable) is the foremost chef in the field of cooking up new bio-terrorism threats. Put some Ebola with some flu and BAM! Thats one spicy meatball. So he runs this bio-terror outfit in Hong Kong. But he runs it, and I am so not kidding with this, he runs it on the second floor of a shopping mall. Yes, that’s right, a shopping mall. You know, for customer convenience when they want to get something from the Gap, stop by an Orange Julius and then, if they’re up to it, maybe purchase a horrible biological weapon.

SHOOT OUT: What’s even worse than the location of Mr. Bad Guys lair is that Croft and her shady partner Terry Sheridan (Gerald Butler), who also happens to be a dangerous old flame, infiltrate the lab. And what do they and the bad guys proceed to do? Why they have a shoot out  in a biological weapons lab! Gee Ms. Croft, hope none of those horribly debilitating biological weapons are airborne. Its like an extreme and humorless update of the bull-in-china-shop metaphor.

WALL: Croft and Sheridan are discussing possible routes to Mr. Bad Guys Hong Kong Bio Lab. Sheridan says the bad guys will be watching all the roads. Croft smirks and says, All but one. Cut to Croft riding a motorcycle on the Great Wall of China. Yes. The Great Wall. Itd be like, Well theres one place the bad guys will never expect us! and then they bungee jump off the Sphinx.

AFRICA: When Mr. Bad Guy finally decodes the map to the location of a desired artifact they witness scenes of an African prairie. Good, he says, It’s in Africa. And then he trots off. Because, you know, it’s not like Africa is a continent or anything. Apparently these people need no more specification. 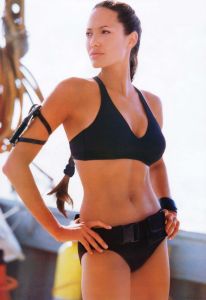 Tomb Raider 2 is a deeply flawed film. It’s trying to be a lady Indiana Jones with just the right mix of adventure and archeology. To compare this film, or its predecessor, to any of the Indiana Jones films (even the lowly second one) is just sheer lunacy. Pity Jolie, because this woman just cant get a good script sent her way so she, Croft, and yet again the audience, are saddled with a dumb adventure story that ratchets few thrills. The premise is on Jonathon Reiss (see, I bet youre ALREADY saying who?) trying to find the location of Pandora’s Box so he can encapsulate the evil inside it and sell it to the highest bidder. Uh, sure, whatever. Did anyone fail to mention that the whole myth of Pandora’s Box centered on the things … being released? So that the only thing remaining in the box was hope? I don’t think hope will go well on the auction block among world terrorists.

An action movie is forgiven its plot trespasses if it can deliver when it comes to the action. Sadly, even the addition of Jan de Bont (Speed, Twister) as the director doesn’t seem to squeeze too much juice in what is quickly becoming a lemon. Tomb Raider 2 visits lovely locales like Hong Kong, Greece, Africa, but what does it say when the locations are often the most exciting parts of your action film? Excluding one terrific death-defying stunt off a skyscraper, the action for Tomb Raider 2 is just mundane and a little too tidy.

Not everything is bad with the flick. It is better than the first one, but thats like saying cholera is better than tuberculosis. When the bar is set so low by the first movie its easier to trip over it than ascend it. Butler adds a nice character for Croft to play off of. Sheridan is a fun character because hes genuinely mysterious and we dont know which side hell eventually turn. Having his character needling Croft about her darker past with him gives the film its best scenes. He does have smoking chemistry with Jolie too. She herself has always seemed a natural with the character. I like Angelina, I really do, I just wish someone would craft a decent script to house this wiry character.