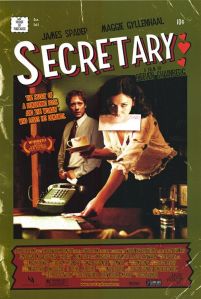 Secretary is a new romantic comedy with a few kinks to it. Its actually the most romantic S&M movie ever. It’s the first S&M romantic comedy since maybe Garry Marshall’s disastrous 1994 Exit to Eden. Im still trying to get the image of Rosie O’Donnell in a bondage mask out of my ongoing nightmares.

Lee Halloway (Maggie Gyllenhaal) is fresh from a stop at a mental institution for her hazardous habit of cutting herself to feel relief. Her overbearing mother stashes the entire kitchen cutlery in a locked cabinet. The sheltered Lee resorts back to a kiddy make-up box stashed under her home bed. Instead of colorful brushes and arrays of lipstick, she has a selection of sharp objects. Lee goes job hunting to step back from her habit, and is hired as a secretary to E. Edward Gray (James Spader). He is a rigid taskmaster who delights in pointing out typographical errors with his red marker, his weapon of choice. Gray enjoys his dominance and Lee complies, even if its routing through garbage. He ticks away Lee’s flaws like a checklist of annoyance but also appears to have genuine concern for her. When he notices her wounds Gray confronts her and convinces Lee to stop cutting herself.

The turning point arrives when Gray orders Lee into his office one afternoon. He commands her to bend over his desk and then delivers a sound spanking. Lee stares at her purple rump with fascination, like something has been awakened inside her. Soon enough Lee purposely makes typos so she can re-assume her spanking position. 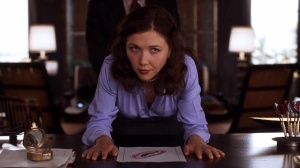 Maggie Gyllenhaal is a cinematic find with a fearless and breathtaking performance that is at once delicate, nervous, self-controlled, seductive and delightful. Gyllenhaal, with her heart-like face and pert lips, radiates star quality. She allows the audience into Lee’s head and we quickly fall in love with this peculiar yet charming heroine. If there is any justice in this world Gyllenhaal should at least get an Oscar nomination (she didn’t). Spader can do this left-of-center creepy character stuff in his sleep.

Secretary on the surface may seem like a fetish flick but it’s no different than boy (sadist) meets girl (masochist) and falls in love. Director Steven Shainberg treads carefully around serious subject matter, like Lee’s self-mutilation, to focus on these two very special characters. Secretary isn’t making any loud statements on sadomasochism or post-feminism, it’s just showing us that S&M is the route these two people take to find true love. It doesn’t judge them for their unconventional tastes and neither should we. This is one of the finest romances in recent memory and it seems to come from one of the most unlikely places.

Sadomasochism has been predominantly shown involving pain or some leather-masked madman evoking torture. Secretary may be the film that shows there can be pleasures with pain. Some people regard what Lee and Edward do as sick, perverted, or downright wrong. Secretary is a foot in the door to get people to understand what willing sadomasochism really is about. We all have fetishes and interests, and S&M is the number one fetish truth be told. This isn’t your everyday romance.

Obviously, this is a movie that will not appeal to everyone. The relationship between our leads is surprisingly complex but gentle and even sweet (if thats the proper word for an S&M romantic comedy). Secretary shows that it truly takes different strokes and, despite an overly silly ending, is the most pleasing romance of the year. Youll never look at red felt pens the same.