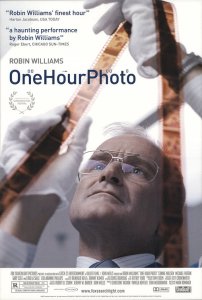 Do we regularly invite strangers to view the picturesque and personal moments of our life like marriages, celebrations, and maybe even a handful of hastily conceived topless photos? Well we all do every time we drop off a roll of film for development.

Robin Williams continues his 2002 Tour of the Dark Side (Death to Smoochy, Insomnia) as way of Sy, your friendly photo guy working at your local Sav-mart superstore. Sy takes an intense artistic pride in the quality of prints he gives. He knows customers by name and can recite addresses verbatim. One family in particular Sy has become fond of is the Yorkins, mother Nina (Connie Nielsen), father Will (Michael Vartan) and nine-year-old Jake. The Yorkins have been coming to Sav-mart and Sy for over 11 years to have their photos developed. He tells Nina that he almost feels like Uncle Sy to the family. For Sy, the Yorkins are the ideal postcard family with perennially smiling faces and the happiest of birthdays. He fantasizes about sharing holidays with them and even going to the bathroom in their posh home. 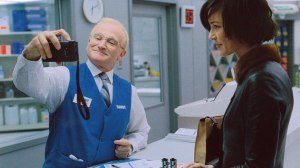 Sy is an emotionally suppressed and deeply lonely man caught in his delusions. In one of the eerier moments of the film we see that Sy has an entire wall made up of hundreds of the Yorkin’s personal pictures. When Sy attempts to become closer to the objects of his infatuation that’s when things begin to unravel at a serious pace. The more Sy learns that the Yorkins are not the perfect family he yearns for the more he tries to correct it and at any cost.

One Hour Photo is an impressive film debut by music video maven Mark Romanek (best known for the NIN “Closer” video). Romanek also wrote the darkly unrepentant story as well. One Hour Photo is a delicate voyage into the workings of Sy’s instability with lushly colorful metaphors. Romanek’s color scheme is a lovely treat, with vibrant colors popping out and Sy’s life being dominated by cold, sterilized whites. His direction is chillingly effective.

This may be the first time we can truly say Robin Williams has not merely played a version of Robin Williams in a movie. Sy’s thick glasses and thinning peroxide-like hair coupled with an array of facial pocks allow us to truly forget that the man behind the mask is Mork. His performance is unnerving and engrossing. The supporting cast all work well. Nielsen (Gladiator) is a sympathetic wife even if her hair looks like it was cut with her eyes closed. Vartan (Vaughn on ABC’s wonderful Alias) plays understandably wary of Sy’s friendliness. The great Gary Cole has a small role as Sav-mart’s manager who grows tired of Sy’s outbursts and peculiarities. 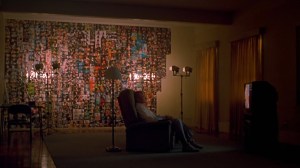 One Hour Photo is rife with nervous moments and titters. Williams almost has an uneasy predatory feel to him when left alone with Jake. The greatest achievement the film has is that is depicts the scariest person youll ever see, sans hockey mask, and by the end of the film you actually feel degrees of warmth for this odd duck.

Not everything clicks in Romanek’s dark opus. A late out-of-left-field revelation by Sy feels forced and needlessly tacked on. The Yorkin family photos all appear to be taken by a third party, since the majority of them involve all three of them in frame. The climax to One Hour Photo also feels anything but climactic.

A compellingly creepy outing, One Hour Photo is fine entertainment with beautiful visuals and a haunting score. And maybe, in the end, it really does take an obsessive knife-wielding stalker to make us realize the importance of family.