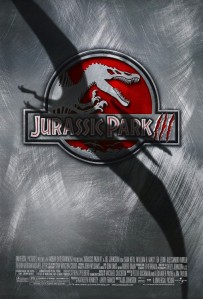 As we last left Dr. Alan Grant (Sam Neill) he is still making the rounds to financially support his ailing archeological digs in Montana. A couple (William H. Macy and Téa Leoni) ask the good doctor to be their guide as they have chartered a plane to fly over the island of Isla Sorna (or Nublar, I forget which, they’re both really Hawaii anyway). Grant hesitates at first but when their checkbook comes out he begrudgingly accepts – proving again like the first two, that no matter what the danger, archeologists will do whatever for grants. The truth is that the couple is searching for their lost boy (Trevor Morgon) who was stranded on the island when he partook in an idiotic para-sailing sight seeing adventure by the island. Of course the plane gets destroyed and they must all fend for themselves.

Jurassic Park 3 makes no bones about what it really is – a dino thrill ride. There’s no opportunities to flesh out characters, there’s no time for set-up, it’s just straight to the island and constant running from peril from there. The pacing of the film and structure is like an amusement park; the people are on one ride that thrills, then they quickly move to another within minutes, and repeat for an afternoon of fun. To boil it down it’s dinos chase humans, stir, and bake for 90 minutes. 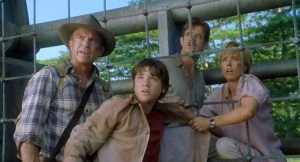 It seems that in every Jurassic movie we have some kind of new scientific theory being explored and eventually vilified. In the first it was dinosaurs behaved more like birds and perhaps evolved into them, the second had something to do with maternal behavior and parenting. And now in Jurassic Park 3 the new scientific dig is that raptors could communicate verbally to one another – in essence talk. There’s even a sequence late into the flick where they basically “talk” straight for something like a minute. I was hoping Dr. Doolittle would waltz in at any moment and start singing, but, despite my best hopes and wishes, it was not to be.

The effects and animatronics have gotten better than ever, and they were stellar to begin with. There are moments of great thrills and fun, but too often then not, it all feels routine. What should be an awesome sight of dinosaurs roaming is now blasé. What should be fearsome coming face to face with the familiar predators like T. Rex and the raptors now seems, well… too familiar. The only true moment of great awe and freshness is when the group is walking along a rickety walkway only to discover they’re inside a giant aviary complete with hungry pterodactyls. 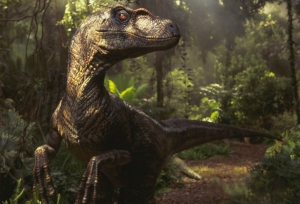 Acting in a Jurassic Park film usually consists of a healthy scream and some fast legs. Everyone is okay by those standards, but Leoni’s character is just far too annoying. I would’ve enjoyed the flick more if she had been eaten. In another stroke of sure luck, all of the major Hollywood cast members survive yet all the extras or unknowns perish. Call it the Poseidon Adventure syndrome (Thank you Ebert for writing this first so that I might rip you off in the future).

Director Joe Johnston (The Rocketeer, Jumanji) inherited the dino franchise from master guru Spielberg and has done a fairly capable job with his efforts. The action is fast and there are a couple of particularly nice visual set-ups sprinkled through out the film. The marvel that was in Spielberg’s touch is the most missing however. The “script” (and I use this in a very loose sense) is actually co-credited to Alexander Payne, which is a rather interesting morsel. The most interesting one though has to be that the young Morgon has actually starred in another dinosaur picture before in his short career – Barney’s Great Adventure.

For action fans in this bleak summer release period Jurassic Park 3 will serve a fine dish at 90 minutes of fast dinosaur attacks and squeals. Hopefully though the ‘Jurassic Park’ franchise will be stopped before the wonder it used to have turns passé. Because right now it’s teetering on the brink.