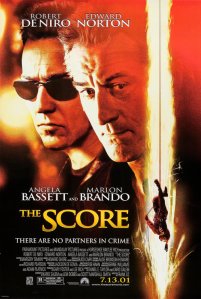 Marlon Brando, Robert De Niro, Edward Norton, three of the greatest actors of three generations. This draw alone warrants a stroll to view The Score one would assume. But not so fast my friend. If you venture out to witness this movie chances are you will fall asleep within the first hour.

The plot runs through the all too familiar terrain of so many crime capers and heist flick predecessors. There’s the old pro who wants to retire (Robert De Niro) who gets pulled into a risky heist planned out by a young pup with some bite (Edward Norton). Will the old pro forgo his plans of retiring on a beach side with little umbrella drinks for one last shot at the big score? If you have to think about this question then you need to get out more. The scheme is to break into the Montreal Customs building and steal a scepter that could be worth as much as 30 million dollars. Stealing a scepter from French Canadians? Was this idea written on the back of a napkin at a bar?

This is in essence the plot of The Score. The characters are mere shells and never fleshed out. With any heist picture there should be the scenes where the characters engross themselves with the ins and outs of their scenario, the rehearsing and practicing, and finally the big move. The Score decides to lightly touch the first, skip the second, and barely give the audience much of the third. The film just isn’t playing by the rules it gives. 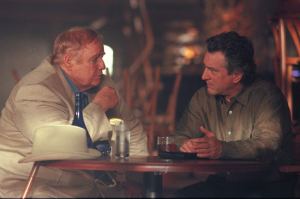 The Score is muddily directed by famed puppeteer Frank Oz. He has directed comedies over the past few years but his first foray into drama, or action, or whatever you want to call it, is downright embarrassing. The entire film waddles in muggy darkness, as if they didn’t have enough money to light the damn picture. After so many scenes of watching the outlines of actors or making out just their faces it just becomes fruitless to even watch. Maybe some of the money should have been poached from the stars’ hefty salaries to make sure that they were adequately lighted.

The beginning hour of The Score may very well be the worst time I’ve had in a theater all year. It’s drawn out beyond its own bounds to establish a set-up that could have been done properly with only a few minutes. This half of the film is leaden and wallowing in boredom, and it feels like it’s never going to end. I think I was actually contemplating suicide at one point.

The structure of The Score is easy to diagram. The first half has to do with the superfluous set-up, then we have ten minutes of the actual heist sequence, and then… it’s done. The film actually ends about three minuets after the heist complete with the now requisite twist ending that anyone with a functional brain will see coming a mile away. What needed to be done is to consolidate that slow-as-a-glacier beginning into something like twenty minutes, then double the length of the heist sequence and actually give it tension. Finally then have the rest of the movie play as a cat-and-mouse game of who has the upper hand with their burgled prize. This would have played with the actors more and at least keep the audience guessing and awake. As it stands, The Score is an incredibly unsuccessful effort when it comes to story structuring. This could be a future classic example of how not to tell a story. 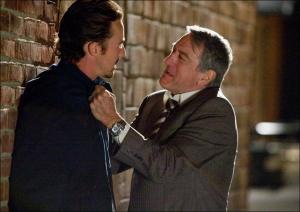 Norton is the only real punch of intensity in the movie. When Norton reappears onscreen it’s as if The Score regains a sense of renewed life. He’s great to watch, either as the young ambitious hotheaded criminal or as his mentally retarded janitor cover. De Niro must be getting a good long distance plan because he phones in yet another performance. He plays his character too smooth that the audience can never fear that he is actually in any danger. Brando is basically for comic relief, that is, if you can understand him through his garbled mumbles. Did this man have a stroke or something? Angela Bassett is useless in this film and wasted. Her role is the frequently off camera girlfriend who urges her man to settle down and let this last one go.

The Score is a lousy heist picture and a lousier attempt at entertainment. It lacks tension, proper story structuring, and even basic movie fundamentals like proper lighting. The Score is a wasted ensemble of a great cast that could only echo the silly cartoon that was Con Air. See The Score if you dare, but make sure to take some NoDoz for the first half.