Not to be confused with 2013’s The Way Way Back, or 2010’s The Way Back about Gulag survivors, this movie entitled The Way Back is about Ben Affleck as an alcoholic basketball coach, and it’s thoroughly fine. We follow Jack (Affleck) as he tries to get his life back on track following the death of a child and the end of his marriage. His alma mater needs a new coach and the former high school basketball star might have found a job that could lead him to be a better version of himself. There’s nothing inherently bad in director Gavin O’Connor’s drama. The acting is pretty good, the docu-drama style gives it a credible sense of realism, and the movie doesn’t downplay the destructive pull of addiction. The problem is that it never feels like it goes deep enough in any aspect. I feel like I just watched a by-the-numbers sports drama attached to a by-the-numbers addiction drama. I kept waiting for more insights with the characters, but the story kept falling back on “dead child” as the explanation for everything. I kept waiting for the characters to distinguish themselves with personalities, but the team to the assistant coaches to Jack’s own ex-wife (Janina Gavankar) are left underdeveloped and more as stand-ins for approving or disapproving figures. There’s plenty of dramatic potential here and it feels like The Way Back doesn’t have the courage or nuance to keep going. I was thinking back to McFarland U.S.A. and how great that movie opened up its world, its community, its culture, getting to know the different characters and their needs, pressures, and hopes. I was absorbed by that movie and with The Way Back I was left mostly unmoved. Affleck (Justice League) is delivering a good performance that touches upon his own challenges with alcohol. He’s the reason to see the movie, but there isn’t much else to warrant your attention. It’s competently made and refrains from getting mawkish, which is something considering how easy it could given the susceptible subject matter. I was just left relatively unmoved because I was kept from emotionally connecting with these people and getting to know and care about their lives from this story. It’s no The Accountant. 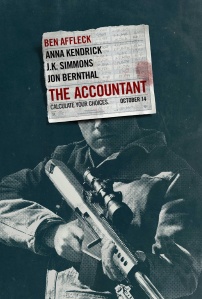 How much do I have to pay for Ben Affleck to do my taxes?

Christian Wolff (Affleck) is autistic and one of the top accountants in the world, able to quickly penetrate stacks and stacks of numbers to analyze trends and problems. His clientele varies from an older couple trying to save their family farm to the mob. He’s also a very dangerous assassin who takes out bad guys with exacting precision. As a young boy, Christian’s autism caused great anxiety within his family, and his father was determined that his son would be able to fight back against a world that didn’t accept him. Ray King (J.K. Simmons) is a retiring Treasury agent trying to track down the identity of Christian and possibly bring him to justice for his vigilante status. On the run from hired guns, Christian decides to stay and fight rather than flee and start a new identity because a co-worker, Dana (Anna Kendrick), is also targeted. Together they must stay one step ahead of killers and the ensnaring investigation of Ray King. 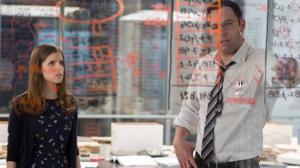 It would be easy to dismiss the movie as an autistic Bourne imitation, except that The Accountant is exactly that and takes ownership over its more ridiculous plot turns. The major problem with the Bourne series, which I believe is only now fully coming to light now that Jason Bourne has run out of legitimate past memories to remember, is that its lead character is a bore. Jason Bourne is a pragmatic and resourceful killing machine, but you wouldn’t want to talk to him at a party. He’s a boring character who is only interesting when he’s moving forward and inflicting damage. The Accountant has a lead character with the same set of skills but it also makes sure that he’s compelling even when he’s not killing the bad guys. Christian Wolff is a compelling lead character because he doesn’t fit in, he doesn’t relate easily to others, and he has social and emotional vulnerabilities that make him easy to root for while also serving to ground him. I’m not saying that those on the autism spectrum would make the world’s greatest assassins, though the job does require a dispassionate, detail-oriented mind. I was amused just watching Christian talk to others because I didn’t know how he would respond or how others would respond to him. He acts differently and it makes regular interactions interesting, and that’s before he becomes a superhuman assassin later. He’s leading a double life, and that provides just about every scene with an extra layer of irony, mystery, and intrigue. Christian is an intelligent warrior, working through strategy and improvisation but also luring his opponents into traps. He’s deadly but also efficient. He goes for headshots and dutifully moves along. He doesn’t play around and neither does the movie. When Dana is trapped in her bathroom with a hired killer on the other side, she takes the toilet lid and smashes the guy’s hand. That’s exactly what a thinking person should do in this life-or-death scenario. I appreciated that even with the action thriller heroics that the actions of the characters were still credible to their behavior.

The larger world is also populated with interesting characters and a complex story structure to match. I’ll readily admit that the screenplay by Bill Dubuque (The Judge) doesn’t need to utilize all of the subterfuge it does. We open on one perspective, circle back later with a richer understanding, jump around in time, and then we even sit down with Ray King and the movie takes a 10-15 minute pit stop to explain everything. It’s a strange moment where Ray gives us his full back-story, which is unexpected and unnecessary in the overall big picture but I enjoyed the commitment to larger world building. Another great addition was Brax (Jon Bernthal), treated as a parallel storyline for the first half of the film. In two very effective scenes he’s introduced with menacing efficiency and he’s a memorable foil we know will have to be faced later. I recently watched the atrocious revenge thriller I Am Wrath that was filmed in my city of Columbus, Ohio. There wasn’t one enjoyable moment, memorable villain, or even memorable death. In one scene with The Accountant, where Brax convinces his target the reasons why he should kill himself with an insulin overdose, I had an interesting and intimidating foe. The impression is immediate and unmistakable and in one scene you establish his danger. There’s a level of detail that isn’t seen that often in these kinds of films. There are several storylines and timelines and lingering questions but by the film’s end they’re all reasonably put back together and the audience is left satisfied. There will be some twists that a quick-witted viewer will be able to anticipate knowing the economy of characters but that doesn’t take away from their impact.

Affleck has rightfully earned serious acclaim as a director and screenwriter during his career rebirth but the man deserves his due for his acting as well. By most accounts, he was the best thing about the steaming pile that was Batman vs. Superman, and this is after the Internet exploded in apoplectic fits over his casting. With The Accountant, he gets to play a superhero and a socially challenged outcast, which must seem like the best of both worlds for an actor. Affleck is wonderfully dry and matter-of-fact as Christian. When he jumps into action he has a disciplined sense of purpose that can be fascinating. It’s a great lead role for Affleck and he finds interesting ways to demonstrate various emotions through an unorthodox lens. Christian doesn’t break down and blab his feelings, nor does he necessarily process emotions in the same conventional sense. He commands the screen whether he’s talking or running and shooting bad guys, and that’s all I can ask for. 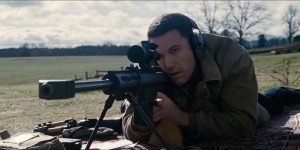 After leaving The Accountant, I desperately wanted more adventures with this lead character and this world, and I was even dreaming up the idea of adapting this concept into a weekly TV crime procedural. It’s rare that a movie leaves me wanting more, and it’s even more rare when a movie leaves me wanting to watch a weekly variation of Christian Wolff living as whiz kid accountant by day and enforcer of justice by night. Director Gavin O’Connor (Jane Got a Gun) has given me a glimpse of a world that has plenty of shades of moral ambiguity but still dishes out the action thriller goods. It begins like A Beautiful Mind, shifts into a Bourne adventure, and then concludes like a mixture of Haywire and O’Connor’s own Warrior. There is far more action than I thought there would be. It blends the influences and tones without losing its own sense of identity as well as its pinpoint sense of what an audience craves for entertainment value. The movie doesn’t treat those on the autism spectrum as freaks or as “others.” It feels far less exploitative or borderline manipulative with its inclusive message than, say, Rain Man. The reason he’s a super assassin isn’t because he has autism but because his insane father trained him to be Batman to combat his autism. The non-linear narrative doesn’t need to be as purposely hard to follow but it does keep the audience guessing until the climax. The Accountant is a character study, a twisty thriller, an exciting action movie, an overall satisfying slice of good vs. evil, and a world that I need weekly adventures, please. 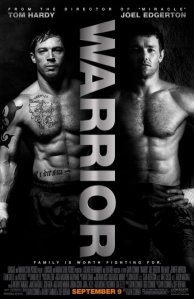 This may be a mixed martial arts (MMA) movie in appearance, but really Warrior is put together like a traditional boxing movie. Director/co-writer Gavin O’Connor (Miracle) takes a kitchen-sink approach to storytelling; just about every damn dramatic thing you can think of, short of emergency baby deliveries, is stuffed into this movie. You’ve got two brothers, one a hard luck school teacher (Joel Edgerton) trying to save the bank from taking his home (his family is broke due to his sick daughter’s medical condition), and the other (Tom Hardy) an Iraq War vet who saved lives and wants no glory, for he’s haunted by the men in his platoon who did not survive. Add a drunken father (Nick Nolte) trying to live life on the straight-and-narrow who wants to get back in his sons’ good graces, the teacher’s community rallying around him, the Marine’s comrades in service rallying around him, and some major personal issues between brothers (Hardy feels that his bro abandoned him and their sick mother), and two competing underdog tales, and my God, it’s hard not to feel beaten into submission. But damn if it isn’t effective stuff. I was tearing up at multiple points, completely sucked into the drama, riveted by the brutal, adrenaline-pumping MMA fight scenes, and pining for family reconciliation. Hardy and Edgerton flex more than their muscles on screen; each gives terse, heartbreaking, completely convincing performances as broken-down men struggling for redemption. You don’t have to no a lick about MMA to get hooked by the heavy emotional beats of the movie. Warrior is by no means a subtle movie, but it pushes all the sports genre buttons expertly, presenting a gratifying, affecting meat-and-potatoes drama that grown men are given permission to get weepy over.