Has a multi-billion-dollar franchise ever had this much confusion and inconsistency with a name? The Fast and Furious saga, which is what we’re now calling it I suppose, began twenty years ago in 2001 and has undergone all sorts of titular irregularity. We’ve had different adjectives favored (Fast Five, Furious 7) and even gone the route of number-related wordplay, like 2018’s very soap opera-sounding The Fate of the Furious (spelled F8 in some incarnations). The ninth entry is titled F9, and by the logic of the previous sequel, I would assume that was intended to stand for “Fff-nine,” or likely “Fine,” and at this point an implicit admission of the franchise just not even trying to be relatable to any kind of recognizable pattern or order or even coherency. Alas, the title is apparently only supposed to be read as F-9, followed by the also soap opera-sounding The Fast Saga subtitle (sorry, “Furious,” maybe you’ll regain credit billing in the tenth movie in 2023). Maybe that will include the soap opera-sounding subtitle, “As the Wheels Spin.” It’s all just a curious way to handle name recognition for a twenty-year blockbuster franchise. F9 was delayed a year from COVID, a phrase that will be repeated a lot with upcoming fall releases, and after watching the 130-minute sequel, I think the franchise has finally exhausted its general appeal for me. 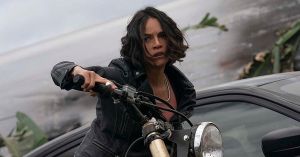 I’ll begin by stating my own apologist stance on the Fast saga. I’ve never been invested in this franchise for the characters (with the exception of The Rock because he is The Rock) or for the stories, and I doubt few others who even consider themselves fans would differ. I watch these movies for their ridiculous stunts and action set pieces that don’t just defy the laws of physics but make the ghost of Isaac Newton vomit. As long as those action set pieces delivered the goods, I was able to forgive much. And I have had to ignore or forgive a lot but until now I have found those set pieces able to clear an increasingly elevating hurdle, the baggage of these characters and trying to make me care even as they become impervious superheroes that have long left the earthbound trappings of a scrappy team of underground street racers lead by Vin Diesel back in 2001. Now Diesel is 54, every member of his beloved crew/family will never die even after they appear to die, and the filmmakers have decided to introduce a long-lost adult brother played by John Cena, never mind the fact that these two muscle men don’t look like they share a single shred of DNA. It doesn’t matter, and the question remains what even matters any longer for a franchise defined by its brain-melting excess? It’s a soap opera with spy missions. It’s dumb fun to eat popcorn to. That’s all.

I acknowledge the inherent absurdity in bemoaning the over-the-top nature of a franchise whose very appeal was its over-the-top nature. It’s hard to define but every movie universe has a line of sustainable believability. Once that line is crossed, you feel it. The Fast saga has played with this tenuous tonal demarcation line for over a decade. In the eighth movie, the cars were outracing a nuclear submarine and cracking ice floes and The Rock redirected a torpedo with his biceps. That’s crazy, but remember The Rock is a superhero among us mere mortals. In the seventh movie, the cars parachuted out of a cargo plane and drove through skyscrapers. In the sixth movie, they faced off against a tank. And yet, I happily accepted those flights of fancy because they kept me entertained ahead of that nagging sense of incredulity that they were able to somehow outrace. With F9, even with the return of director Justin Lin (Fast 3-6), it feels like the franchise finally crossed that line for me. I completely understand any reader that wants to point and shout “hypocrisy.” In the arms race of action imagination where the producers have had to come up with bigger and more wild set pieces, I think they have inevitably gone from self-parody into ironic self-aware self-parody and back into self-parody again. The best way I can describe it is with the two Expendables movies. The first was amusing action bravado self-parody but then the second film tried to be in on the joke, and all the winking “we get it too” meta commentary just sapped all the enjoyment out of it. The same thing happened with the two so-bad-they’re-good Birdemic disaster movies, with the first a sincere bad movie, and the second trying to be an ironic bad movie, and it just wasn’t the same. The appeal was gone. For me, F9 is the signal that this franchise has begun its descent into Birdemic 2 range and yes, they go to space in a space car and isn’t that what all us irony-drenched fans wanted? It’s like the disappointing be-careful-what-you-wish-for warning of Snakes on a Plane all over again.

Another factor that sank the movie for me was the inclusion of the long-lost brother storyline, especially considering the Diesel character is all about the vague platitude of family. In order to justify this significant oversight, the storyline has to resort to numerous flashbacks to fill in the sordid family details between the feuding brothers. I cannot overstate just how much I do not care about the characters in this franchise, so devoting more time to introducing complicated family histories with melodramatic flashbacks is not what I want to experience during the downtime in between the next explosion. By trying to take these characters and their relationships seriously, or seriously enough, we’re forced to slog through personal drama nobody asked for or actively desires. Better to embrace the soap opera absurdity and just have Cena show up and then every other set piece another long-lost brother shows up, and then we keep cutting back to the same singular flashback but now it’s revealed that another brother was there too previously unseen on the peripheral of the camera. The same thing goes for having to bend over backwards to explain the re-emergence of Han (Sun Kang), a character killed in the sixth/third movie by the-then bad guy (Jason Statham) that we like too much now to be the bad guy. I don’t care that he’s alive again, and the convoluted yet still unsatisfying vague plot to explain his fake death is unwanted as well. Apparently, the only character who will remain legitimately dead in this series is Gal Gadot (for now).

For the hard-core fans, there may be enough nitro juice in F9 to still provide a satisfying jolt of high-octane entertainment. Lin still has a nice command on action sequence visuals and there’s some large-scale carnage that tickles even while it’s undermining every concept of magnetism. Unfortunately, the joy I felt with previous action incarnations from the series was not recaptured this time. It just doesn’t feel as memorable, at least in a positive way. Going to space is memorable, but not in a positive way, unless they had to race a universe of aliens on the moon to save the Earth. I genuinely like Cena as an actor, but he’s far too strait-laced and dull here. Watch the recent Suicide Squad reboot to be reminded just how charming and comically talented he can be in the right role. Diesel seems to be putting less and less effort into every performance almost like a dare to the audience on how little they will accept. There were a few shots I watched where I felt like he was on the verge of going to sleep. The villain is lame, the movie has too many competing comic relief characters, and it’s all too long. I’ve been a defender of the blockbuster bombast of the Fast saga. I’ve considered myself a fan of its outlandish set pieces and ludicrous stunts. I’ve been able to ignore what didn’t work. Alas, the time has come where I can no longer do that. I just felt mostly indifferent and bored for much of F9, and its action highlights couldn’t save the extra emphasis on convoluted soap opera melodrama. Your mileage will vary as far as what you can forgive, but F9 feels like the appropriate off-ramp for me.