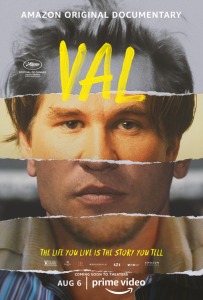 Watching the documentary Val, comprised from thousands of hours of home videos shot by actor Val Kilmer over the course of 30 years, may make you realize just how little you know about the actor. His reputation is that he’s difficult to work with, conceited, and Method to the point of losing himself in roles and pushing his co-stars to the brink of sanity. Coming from his own words, narrated by his son Jack, naturally allows the most empathetic read of the man and his rationale for his personal and professional decisions. I never knew about his family life, losing his teenage brother who was an inspiration and early collaborator. I never knew Kilmer wrote his own plays, including a student production at Juliard that broke new ground. I never even knew he was an early adopter of technology and had a warehouse filled with his self-documentation and behind the scenes footage (Kilmer is even credited with the doc’s cinematography). You get the sense of a wounded and restless soul, a handsome movie star who so rarely found a film role that allowed him to feel like an artist in his element. Kilmer can be one of his generation’s greatest actors, as evidenced in classics like Heat and Tombstone and as Jim Morrison in The Doors, still one of the greatest acting performances I’ve ever watched. Kilmer languished through plenty of studio dreck as well. His time as Batman is marked by dejection and loneliness, stuck playing the straight man in a movie of oddballs and trapped in a suit of limited mobility and an inability to hear (actors and crew started avoiding him in the Bat suit because he couldn’t respond). Strewn throughout the movie is contemporary footage of Kilmer after beating throat cancer, though the subsequent surgeries have left his speech haggard. Listening to the labored and tortured sound of his voice is a direct jab to your sympathy. Given that this is produced by Kilmer from his own archives, and narrated by his son, the documentary isn’t as critical as it could have been. I wish the movie provided more self-analysis for Kilmer, especially on some of his rockier relationships and onset disruptions, like for the notorious Island of Doctor Moreau. I don’t think you can still fall back on his deceased brother for decades of his behavior. There’s a limit to the level of insight because it feels a bit like Kilmer managing his reputation and legacy within the industry. Still, for nearly two hours, Val can be a poignant and illuminating expose of an actor with a reputation for equal parts trouble and brilliance.