I don’t know who this new 2020 Craft is intended for and I don’t think the movie knows as well. If you’re a fan of the 1996 original, which has developed quite a reputation for many millennials, then I think you’re going to be relatively disappointed with this remake/reboot/sequel, whatever Blumhouse is calling this. By that description it should be evident that The Craft: Legacy has a bit of an identity crisis. It’s not exactly a remake because it retains so little from the original except in its witchy teenage premise, it’s not exactly a reboot because it doesn’t come together on its own for a new identity, and it’s not exactly a sequel because the only tangential connection to the original is tacked on in the literal final seconds of the movie. If it was trying to please fans of the original, it’s too lacking, and if it’s trying to chart its own course for a new generation of fans, well that doesn’t work either. As a result, it’s another PG-13 remake of an R-rated move that feels like it’s playing to a different crowd.

Lily (Cailee Spaeny, Bad Times at the El Royale) is the new girl at school. Her mother (Michelle Monaghan) is remarrying Adam (David Duchovny), a popular motivational speaker with three older sons of his own. She befriends a group of diverse teenagers when they suspect Lily might have the potential for special gifts. The girls try sending Lily a psychic message and then ask her to join their fledgling coven. The four of them combine their powers and promise to use their synchronicity for good to push back against the patriarchy. 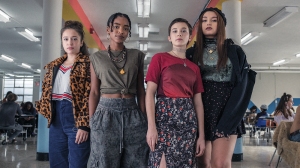 That narrative uncertainty of writer/director Zoe Lister-Jones (Band-Aid) seeps into every moment of the 97 minutes. You get a sense that Jones had a central topic she wanted to provide commentary and then a checklist of “witch stuff” to include that she wasn’t sure about. The activation of the powers in the original related to outcasts grabbing a power denied to them, getting even, going too far, learning some lessons, and then our protagonist having to topple her new friends and the danger they posed thanks to their new powers. With The Craft: Legacy, the magic feels like an afterthought to changing hearts and minds. We only really see one spell and its lengthy outcome where Lily makes her high school bully woke, and he stays that way and joins the girl group as their sensitive pal. This is, by far, the most interesting part of the movie, and yet there’s a larger implication that the movie ignores because it would place our heroines in an uncomfortable light. They’ve reformed the bully into a model citizen of a modern mature man who can admit his vulnerabilities, but they’ve also robbed him of agency and free will. Is this version of him what’s really hiding underneath, or is he simply being manipulated by their spell? This subplot gets more attention than any of the other witches combined. I don’t know anything about the other friends in the group, besides they take their witchy duties seriously and one of them is trans. They get assigned elemental powers later (Earth, Fire, Wind, Water) and that is more definite characterization than anything else. If you asked me what their names were or their defining personality traits I would be stumped.

After last year’s Black Christmas remake, it’s peculiar how closely The Craft: Legacy is following a similar formula. I applaud the diversity behind the camera and having female directors remake these stories for a new time and a new audience, and the concept of toxic masculinity as a threat to all women is potent and provides plenty to work into a horror/thriller dynamic. Yet Black Christmas had to go one step further by saying the evil fraternity that was preying upon women was secretly mind controlled by an evil magic goo of evil. It lets them off the hook. Now with The Craft: Legacy, we have an obvious villain as a symbol of toxic masculinity, and because he’s so obvious I kept waiting for him to be a more insidious foe, manipulating young men into a warped way of thinking about strength and virtue. However, this doesn’t happen. The antagonist feels like any generic abusive husband on any disposable Lifetime original TV movie. The topic doesn’t feel explored or nuanced for its big theme or cleverly matched up with the iconography of horror for extra genre commentary. What about the different sons? couldn’t they reflect different stages of his influence? Or the young and more innocent son, couldn’t he be a target of reprogramming? The movie doesn’t give us anything to really chart. It feels like much must have been left behind through several edits. If Jones and her team wanted to use their movie to make a pertinent statement on toxic masculinity, I was hoping for more than a relatively obvious, “It’s not good.” Even the Black Christmas remake gave its theme more consideration than this and talked about its generational impact. 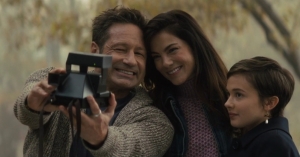 In the original, each member of the foursome has a backstory, a personality, a central conflict before and after developing her powers. While the conclusion was like Wicca X-Men, the rest of the movie was an effective high school drama with relatable characters. They were Catholic schoolgirls rebelling against their school and their families in the 1990s by practicing witchcraft. It was a statement. Now, the girls practicing witchcraft in a regular school during modern times just feels like an accepted experimentation from a culture that has become more tolerant, and that’s fine, but that means the movie has to provide other avenues to make new statements. The lackadaisical response to the supernatural really harms the movie. It makes it feel like the hook could have been anything. If the characters are given great power, use it sparingly, and then decide they might not be responsible enough so soon after, that’s simply boring storytelling. That’s the equivalent of a man finding a wish-granting genie, and then after the first wish where he asks for new pants he decides, “Oh, too much for me.” This is what I mean by The Craft: Legacy being too timid about being a supernatural horror thriller. It’s got the feminist perspective you’d expect from the underdog characters gaining powers, but it’s lacking a fundamental understanding or appreciation of its genre. It’s mostly confined to multiple nightmares and the occasional jump scare. The concluding good powers versus evil powers face-off is so awkward and cheesy that it deflates any good will earned.

The Craft: Legacy is a perfunctory remake/reboot that doesn’t seem interested in its characters, in its supernatural horror aspects (a sleepwalking brother that’s used as a jump scare and never explained?), or even in the exploration of its major theme on toxic masculinity. There isn’t much in the movie that is outright bad but there is nothing that shines either or proves to be memorable. The 1996 original isn’t exactly a genre classic but it looks so in direct comparison to this flat rehash.