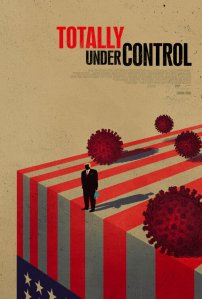 Over 220,000 Americans have died from COVID-19 as of this writing. We here in the U.S. are four percent of the world’s population and yet account for twenty-percent of the world’s deaths. I lament that this number will only go higher over the next many months of the pandemic that has defined 2020. Oscar-winning filmmaker Alex Gibney (Taxi to the Dark Side, Going Clear, Enron: The Smartest Guys in the Room) and his co-directors Ophelia Harutyunyan and Suzanne Hillinger conducted interviews around the world with special cameras and protective measures to complete the first major documentary on the coronavirus outbreak. Totally Under Control (title taken directly from Trump’s early February response to COVID-19) is their collaborative effort, and it’s both a timely work of criticism and destined to be inevitably out-of-date in short order.

Given the constant deluge of news about the by-the-minute Trump administration mistakes and questionable calls, the question for a documentary like Totally Under Control is whether or not it provides more insights than simply keeping up with the shocking and dispiriting headlines. I would argue that Gibney’s first pass at recounting our still-living history of calamity offers the benefit of hindsight but also an immediacy or urgency, considering we are still months away from a presumable vaccine. The movie feels like what the first part of the COVID-19 mini-series would cover, focusing on those first few critical months of bungled government response from January to April. The abbreviated focus allows Gibney and his crew to zero in on what the early mistakes were and how we have been paying for them ever since. The collapsed time also allows for more get-able interview subjects, people who might not currently be serving in the administration who feel comfortable or compelled to go on the record with their accounts. There are some great interview subjects here that were plugged in from the beginning, sounding the alarm, and who can give the public a clear understanding of just how woefully equipped a deeply un-serious administration was to handle the most serious public health crisis in a century.

One of the more aggravating tragedies is that many of the thousands of COVID deaths could have been prevented if better steps had been taken early to contain its spread. Naturally, there’s always going to be clearer reflection when looking back on mistakes of the past, not knowing at the time that they were mistakes, but the Trump administration made a political calculus that would only exacerbate the spread of the coronavirus. Early on, the Trump administration’s guiding principle seemed to amount to stripping away anything and everything that the Obama administration had accomplished. It didn’t matter what it was, if Obama had built it, then Trump was motivated to tear it down. This included the pandemic response task force in 2018. This included ignoring the 70-page pandemic response playbook left behind. So when the early warnings appeared in December and January, the United States was already playing from behind. We could have been preparing with amping up production for necessary medical supplies and installing the infrastructure for a robust testing and tracing program; however, this all came into conflict with the other major political calculus that governed all of Trump’s decision-making. His mantra heading into 2020 and re-election was, simply, “Do no harm… to the economy.” Rather than take preventative measures or treat the virus as a danger, the Trump political apparatus was afraid acknowledging the threat so it would not spook the financial markets, a source of bragging for Trump to tout why the American people should re-elect him. When the CDC briefed government officials and media with updated predictions of normal life being uprooted, the markets responded negatively, and Trump fumed. From there, decisions were less about stopping the coronavirus and more about making everything appear like it was no big deal.

Totally Under Control keeps a running calendar of events to compare the U.S. response to South Korea, two countries that had their first official COVID infection on the same day. The Korean government had already taken preventative measures after the 2015 MERS scare to be ready if another frightening new contagion emerged. The politicians left the science to the scientists and followed their recommendations. The Korean people wore masks and were diligent about simple safety measures to stay safe. They had a system of contact tracing already installed. These moves are in sharp contrast to the American response, and while there would be some cultural roadblocks for Americans who consider themselves rugged individuals to submit themselves to a big data-harvesting consortium that contact tracing requires, we could have done so much better. In 1918, people wore masks because it made a real difference and saved lives. They took the Spanish flu epidemic seriously and they had fewer networks of knowledge at their disposal. Today, sadly, wearing a mask has become a political symbol and for many not wearing a mask has become a proud yet misguided act of defiance. Masks show consideration. Masks have been said to be even more effective at thwarting coronavirus spread than a vaccine. Masks work. The rest of the world, and South Korea, have showed what happens when you trust scientific recommendations. South Korea has less than 500 total COVID-19 deaths with a population of 52 million. Even if you multiply that figure by a generous seven to match the current U.S. population, that’s still only an estimated 3,500 total COVID-19 deaths during the same period.

The level of ineptitude is highlighted by two key interview subjects. Rick Bright was the director of the Biomedical Advanced Research and Development Authority (BARDA) from 2016 to 2020. He filed a whistle-blower complaint about the Trump administration applying undue pressure to approve hydroxychloroquine, an experimental treatment that showed no signs of helping COVID patients. There was no medical reason to eliminate safeguards and protocols but the administration wanted a ready-to-market cure, and Bright was horrified that they wanted to make it widely available and over the counter, which would surely lead a panicked populace to request it and endanger their health. Recounting his experiences even brings Bright to tears as he recounts the disregard for safety and dereliction of duty of these political appointees dictating science. He’s a sobering and thoughtful voice to have in the documentary and also one of the biggest names of someone who worked inside the Trump response team. Another intriguing subject is Max Kennedy, who served on Jared Kushner’s White House supply chain task force. Kennedy thought he was going to be running errands or support tasks for the task force. He didn’t realize he and the other volunteers would be the entire task force. They were left to their personal laptops and emails to cold-call companies and perform Google searches to find personal protection equipment (PPE). They had no experience, no coordination with other government bodies, and they were competing against the federal government for the exact same dwindling supplies. Kennedy is breaking the NDA he was forced to sign to reveal the full extent of the chaos and inadequacy that Kushner’s “expertise” brought installing a solution to a very real problem. Kennedy and Bright’s first-hand insider accounts are both harrowing and maddening.

When it appeared that the Trump administration wasn’t going to be able to contain COVID-19, that’s when they pivoted to shifting blame and responsibility onto the states. The Trump administration could have authorized the Defense Production Act to force companies to begin manufacturing very needed PPE, but they didn’t. They thought, as conservative dogma has preached for decades, that government is the problem and the private market will solve it all. The problem with this line of thinking is that there are certain powers the states do not have in comparison to the federal government. State governments cannot run past their budgets. State governments do not have the power to set up a national system of testing. State governments were forced into a 50-way fight for supplies and were vulnerable to capitalistic gouging. The states were then also competing with the federal government, which was driving up the bids for these supplies and then overpaying for the same supplies by many times over their cost. The states were left on their own to duke it out and any slip-ups or shortages were disparaged from afar by a Trump administration that wanted to look in charge but didn’t want the responsibility.

Totally Under Control is an essential documentary for our times but it also can’t help but feel like the beginning of an even bigger and more excoriating story. It’s frustratingly incomplete. It’s the opening chapter of the examination on the U.S. response to the coronavirus, and this story will likely only get more depressing and infuriating as the death toll rises and the regret of “what could have been” grows even more pressing with every week. Gibney and his fellow directors keep their movie pretty straightforward and efficient, and there is something powerful about putting all the relevant facts together into an easy to understand timeline and seeing all the dots connected. Gibney has always been blessed at his ability to artfully articulate a big picture with his films. Totally Under Control is a useful artifact for history and a denunciation of the early days when so much could have been so different if the United States had leaders that trusted science, didn’t dismantle key government bodies, took responsibility when the moment called upon rather than ducking leadership, and cared about more than their personal finances and standing. It’s only going to get worse from here, especially once we fully analyze all the important steps not taken.