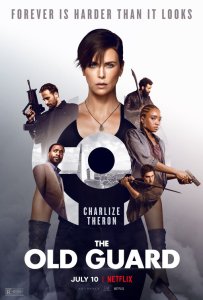 What do you do with an action movie where the action is actually the least interesting part? The new Netflix film, The Old Guard, is based on a comic book series by Greg Rucka (Whiteout) about a mercenary squad staffed with immortals through the ages. Lead by Charlie Theron, whose character Andy traces back to at least the Medieval period, leads the team and sees promise in their newest recruit, Nile (Kiki Layne, If Beale Street Could Talk), a U.S. soldier who is shocked to discover she can come back to life. It’s through this new recruit that we get an introduction to the hidden world of immortals and their hidden history, and it’s these flashbacks that I found the most entertaining aspect of the entire two-hour movie. Watching Theron swing a Viking battle axe is a lot more fun than watching her stalk corridors with a gun. There’s also some great little moments that show an attention to developing the characters and their psychology. Andy has a centuries-old love that was trapped in a suit of armor and thrown into the sea. Besides the fact that drowning is horrifying, imagine dying, then reviving, and then drowning again and again, every few minutes, for an eternity. Wow that is a new level of horrifying. Each of the characters has an interesting history and some degree of dimension, and it’s these soul-searching conversations that I enjoyed the most as they discuss the costs of living forever. However, it’s not quite forever, because immortal heroes have an obvious problem about holding stakes, so at some point the immortals will lose their healing ability, though they don’t know when. It’s something, but it feels more arbitrary, and the super smarmy pharma CEO villain (Harry Melling) is a non-starter as a threat. The action sequences almost feel like a chore, like the filmmakers are checking boxes instead of using them to advance the plot in meaningful and exciting ways. The action isn’t bad but just mundane, lacking memorable set pieces or engaging complications. Even their use of taking punishment is under-utilized in the design. Simply put, a movie with this kind of premise and with Theron as your lead should be more exciting. I loved Mad Max: Fury Road. I loved watching Theron lay waste to goons and gangsters in 2017’s Atomic Blonde, a movie built around her physical capabilities and smartly constructed action set pieces. However, the action we get with The Old Guard lacks the same transformative ability and fight choreography. It’s just thoroughly fine, at best, and I kept wondering if they were saving themselves for a big finish. Sorry to disappoint, it’s just more office hallways with limited gunplay. The energy level is lacking and the music choice throughout the film affects this as well, with the same kind of downer tracks playing again and again. I would rather have spent these two hours listening to the immortal stories around a campfire.